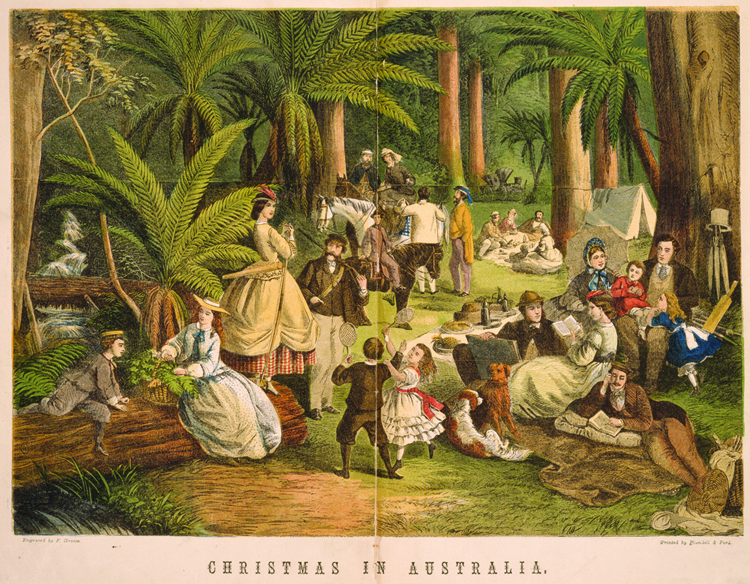 Home > Blog > Featured > Merry Christmas to you & your families!

From Holly to gum nuts

Many 19th-century traditions remain prevalent today. Queen Victoria reportedly popularised the Christmas tree — initially a German tradition — among her English subjects, while the modern Christmas card originated in England in the 1840s and soon spread here. Gradually, Britain’s wintry customs were acclimatised to our summery season. Holly’s place in Christmas decorations was replaced with cherries and mistletoe with roses.

Adelaide’s celebrations of 1880 were particularly grand: Rundle Street blossomed in decorations, from Chinese lanterns to gum branches. In 1836 the Sydney Gazette condemned the increasing ritual of “intemperance”. Before dawn on Christmas Day, the colony’s youngsters reportedly wandered around, calling into homes to bid Merry Christmas. In return, they were granted pence, bread and ale.

Celebrations were also marked with balls and bustling markets. And some aspects of the season have changed little — in 1902, the necessity of having to “tackle the Christmas shopping crowds” was as dreaded as it is today!

Spreading Christmas cheer was not the only motivation behind the annual ‘Native Conference’ events initiated during Governor Macquarie’s administration. Held in the market square at Parramatta, the first Conference in 1814 was attended by 60 Indigenous men, women and children from the Sydney region, who sat in a circle along with the Governor and his wife, enjoying roast beef and ale. By 1818, several hundred Aborigines attended. The 1824 Conference was attended by the tribal chief, Windradyne, who had led the Wiradjuri people’s resistance against colonial settlers in Bathurst. He walked some 200km to Parramatta to request peace from Governor Brisbane, which was duly granted.

Kalgoorlie, in Western Australia, held its first annual ‘Blackfellows’ Christmas Feast’ in 1891, and continued it for decades. In the Western Argus on 27 December 1921, E M Collick appealed for food and donations, noting, “We don’t do much for our black neighbours as a whole, so let us at least be generous to them on their Feast Day”.

Featured image is from the State Library of Victoria: Christmas in Australia, The Australian, 23 December 1865