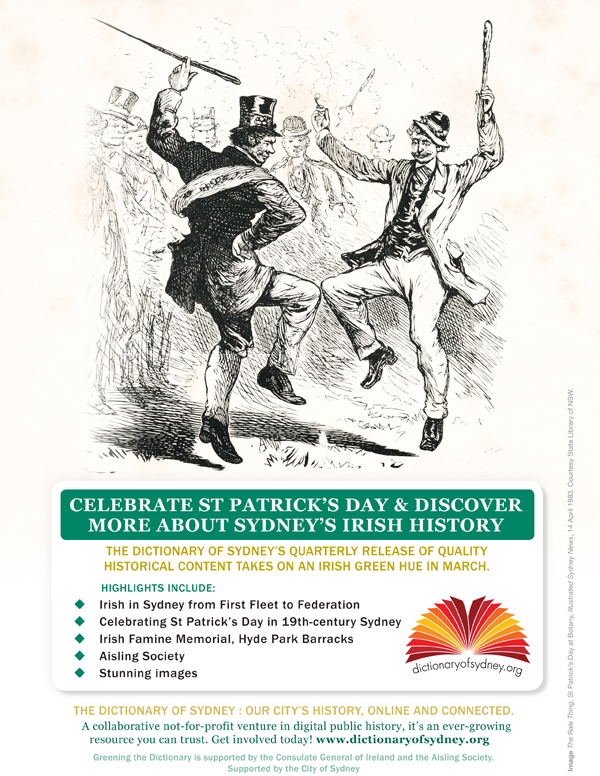 Dr Lisa Murray, Chair of the Dictionary of Sydney and City Historian, notes the Greening the Dictionary project has been conducted in partnership with Sydney’s Irish Community.

“The Irish community has shaped Sydney and now they are shaping the Dictionary of Sydney,” Dr Murray said.

“We see the footsteps of the Irish all throughout Sydney, from the building of Catholic churches such as St Canice’s Catholic Church Elizabeth Bay to the Irish Famine Memorial at Hyde Park Barracks.”

“We live in a great city and one reason for that is the proud contribution made by the Irish.”

The Dictionary’s new content has been written by seven volunteer writers as part of the Greening the Dictionary project conducted in conjunction with the Irish Consulate and the Aisling Society. Consul General of Ireland, Caitríona Ingoldsby said: “I’m very pleased that the Consulate was able to partner with the Dictionary of Sydney on this project to dig a little deeper into the Irish history of Sydney and to learn more about how the Irish community here has evolved.”

“Personally I was surprised and delighted to learn that some of the buildings and places that I’m familiar with in Sydney have Irish connections and stories that I hadn’t heard about before.”

Launched in November 2009, it’s an ever-growing resource you can trust. The main website at www.dictionaryofsydney.org is just the first of several windows into the historical digital repository that we are building in collaboration with the community. The Dictionary website is a forum for public discussion and controversy, an aide to teaching and learning and a source of information and entertainment.