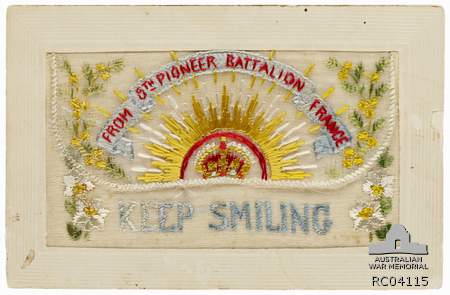 On the 2nd April 1918; the fine, clear morning that greeted all ranks encamped in the 5th Australian Pioneer lines at Arqueves [1] on the Somme, would by no means have foreshadowed the tragedy that would befall the unit by noon that day. The usual morning parade was held and orders were issued. By day’s end, a life would be lost and a promising army career in doubt. But were events simply another unfortunate ‘by-product’ of war, or the result of a systemic battalion culture? By 1918, was complacency commonplace within a unit that prided itself on its military professionalism?

The serious and ‘most unfortunate nature’ of the events that day would be dealt with so swiftly and so astutely, that by the following day the battalion had resumed its normal duties. The Battalion’s war diaries attest to that. Yet for the individuals involved and the battalion history as a whole, it would place a blot on an otherwise exemplary reputation; and possibly ensure a longer lasting legacy of post-war guilt.

The 5th Australian Pioneer Battalion was formed in Egypt on the 3rd March 1916, following the allied evacuation at Gallipoli. It was formed from a nucleus of original ‘Anzacs’ and an influx of reinforcements that had newly arrived from Australia and designated to the service under the 5th Division. A Pioneer Battalion was essentially a construction and labour unit. During World War I it was employed to construct road works (including corduroy roads [2]), to dig communications trenches, insert ‘duck board’ tracks, build saps, and extend ‘light rail’ systems. They were considered to be the ‘handy men’ of a Division and often completed their essential work under fire. The 1916 influx of 5th Pioneer reinforcements consisted of mainly tradesmen, miners and craftsmen, mostly originating from South and Western Australia. Of the 14 Officers and 600 men who marched into the battalion lines at Tel-El-Kebir, Egypt on the 3rd March 1916, only 100 new Pioneers had seen previous active service.

The battalion had seen action in most of Australia’s major engagements on the Western Front, but when rumours of a German major German offensive began to trickle in in early 1918, the battalion was ordered back to their familiar stomping ground on the Somme. They were encamped at Arqueves, a village 18 kilometres north-west of Albert and lay in beautiful French countryside, prolific in wildlife and fruit-bearing trees. The battalion was fortunate to enjoy the delights of the odd hare or two during their stay. Most time within the camp was set towards drill and training, with regular route marches. Picquets were also set regularly, which was fortunate on one occasion when an escaped German prisoner entered the camp and was promptly arrested.

However, the serenity of the setting at the Pioneer camp was suddenly cut short at noon on the 2nd April 1918. Three shots were heard in the ‘A’ Company Officer’s Mess and Lieutenant Reginald Wallis Palmer (Service No. 2641) was dead. Palmer became the third 5th Pioneer officer to die during the war [3].

A joiner by trade, Palmer was fresh faced, dark haired Victorian of moderate stature, being 5 feet 4.5 inches tall and only 9 Stone 6 pounds on enlistment. Still serving in the Militia, he had enlisted on the 12 June 1915 at 21 years of age and was transferred to 5th Pioneer Battalion from 59th Battalion in March 1916. Palmer received his Commission in January 1917 and was promoted to Second Lieutenant, taking up duty in into ‘A’ Company. During the unit’s time in the Ypres Salient, Lieutenant Palmer was recommended for a ‘Mention in Corps Routine Orders’ for his work during the Battle of the Menin Road on the 31 October 1917. The recommendation stated:

‘North of Bellewaarde Lake, east of Ypres, before daylight on the morning of the 19th October 1917, Lieutenant Palmer was in charge of a party of 30 men with 9 ‘General Service’ waggons carrying beech slabs to an important work in the forward area. The plank road had been, and was still being shelled throughout its length from Birr Cross Roads to Westhoek. Many direct hists being obtained, which rendered the road impassable. Realizing the loss of work and time consequent on the non-delivery of the material, Lieutenant Palmer distributed his party as he went forward to repair the breaks on the road, until near Westhoek, he had only man left and a large break to repair. This, with the man’s assistance, he personally carried out. Lieutenant Palmer then piloted his wagons to their destination, in spite of casualties to both men and animals, and delivered his materials. He showed throughout the greatest determination, courage and initiative.’

Despite the auspicious military career thus far, Lieutenant Palmer was killed by one of his fellow officers, Lieutenant Arnold Warren Frazer, No. 981, of Brookvale, Sydney. Immediately prior to Palmers death, Frazer had been inspecting a Lewis Gun that was situated on a table in the Officer’s Mess. Palmer was having a shave near the door and three shots were heard. Palmer was seen lying on the ground; dead, with blood streaming from his head. It was just before noon.

Due to the serious nature of the incident, a Battalion Court of Inquiry – In the Field was convened by 2pm with the assigned purpose of taking evidence into the circumstances attending the death. In the opinion of the court, it found that the death of Lieutenant Palmer was purely accidental and that the Lewis Gun was fired due to Lieutenant Frazer not having sufficient knowledge of the mechanism and his keenness in trying to master same made him overlook the danger to which he was exposing his comrades by placing a full magazine on the post on the Lewis Gun. Frazer was heavily censured in relation to the death of Lieutenant Palmer. However, although not documented, one could predict the fact that the findings of the court would not have assuaged the anguish that Frazer felt as a result of his experience.

Lieutenant Reginald Wallis Palmer was buried in the communal cemetery at Toutencourt [4], France with 23 British war dead, whose burials were made sporadically between October 1915 and August 1918. He is located at grave reference Plot II, Row A, Grave No. 13.

Reginald Palmer’s Last Will and Testament stated “In the event of my death, I bequeath the whole of my property and personal effects to my father, Henry Robert Palmer, Auctioneer, Warragul, Victoria, Australia”. With his death, his parents, of 3 Taylor Street, Moonee Ponds, Victoria essentially lost their second son to the war. Reginald’s brother, Charles Francis Palmer, 922 had enlisted on the 18th August 1914 aged 19 years and 5 months, and had been severely wounded at Gallipoli on the 27th April 1915. He suffered a sever wound to the left arm and had lost sight in both eyes. After some time recovering on hospital in England, he returned to Australia to be cared for by his parents.

On the 4th May 1918, the Palmer family placed a small piece in The Argus, Melbourne, that indicates the magnitude of their loss, but exhibits a pride for both their sons’ service. It read:

First published in DIGGER, the magazine of the Familes and Friends of the First AIF Inc (edited by Graeme Hosken), Issue 41, December 2012, pages 69-75

Notes:
[1] Arqueves is 15 kilometres W-N-W of Albert on the Somme.
[2] A corduroy road or log road is a type of road made by placing earth covered logs or sleepers perpendicular to the direction of the road over a low or swampy area. The result is an improvement over impassable mud or dirt roads. Rough in the best of conditions they were a hazard to man, machinery and horses during the war due to shifting loose logs or sleepers, or the slimy surface.
[3] Lieutenant Charles Horace Turner, 931, died of wounds 11 April 1917 during the First Battle of Bullecourt. He is commemorated in Vaulx Hill Cemetery, France. Enlisted 9th December 1914. The second 5th Pioneers officer killed was Lieutenant Maurice Wilson, killed in action 8 October 1917. He was killed by a shell that struck a dugout in which he was treating a wounded man. Commemorated on Ypres (Menin Gate) Memorial, Belgium
[4] Toutencourt Communal Cemetery, Somme, France – GPS 50.03886,2.45107