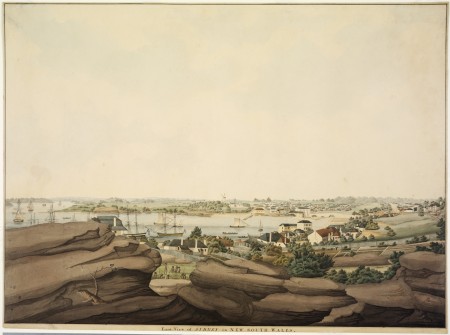 “In both this and the aquatint, Simeon Lord’s house and warehouse are complete. This view for the first time show the third and largest private windmill on the east side of the Cove owned by John Palmer. The drawing may be dated from the appearance of Isaac Nichols two-storeyed house and T-shaped two-storeyed warehouse on the waterfront. They are the tall buildings with blue shingled roofs and white walls, seen in this view below Simeon Lord’s house which is shown here with its fourth floor complete” – First Views of Australia / Tim McCormick, Sydney : David Ell Press, 1987, pl. 89, pg. 125. Image courtesy of State Library of New South Wales