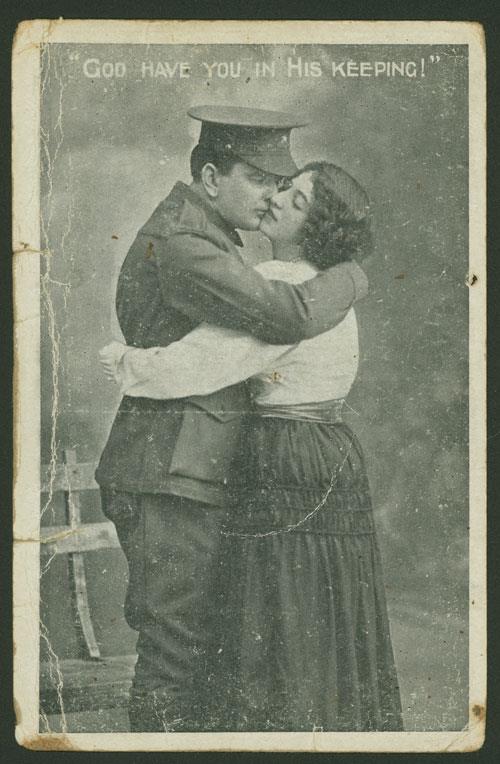 Q. From Joy: How would I go about finding information on my grandfather who is supposed to have worked with/for the US forces as cook in and got stuck somewhere overseas after the war because there weren’t enough ships to get them back to Aus.
A. IHM: It would be worthwhile checking merchant navy records at National Archives of Australia There are also books by Bill Lunney with info on those chaps e.g. Forgetten Fleet :: http://ow.ly/kpx38
A. Joy: Wow! thanks for the help. I’ll try those.
A. IHM: Good luck with your search Joy – let us know if we can help with anything else 🙂

Q. From Polly: Was it usual to photograph soldiers for their files? (WW1)
A. Paul: Hi Polly. No, very unusual. It was not a standard practice but there was a description form on attestation papers where physical details were supposed to be recorded.
A. Polly: Hi Paul, thank you!

Q. From Sue: My grandfather died “due to consequences of the war (WWI)”. My mum was 4 years old when he died in 1931. It is only within the last decade that my mum ordered her father’s death certificate to discover that he had committed suicide. Is there a way of getting access to his medical records associated treatment following his war service?
A. Paul: Have you checked to see if there’s a service record, Sue? Obviouly you stand more chance of finding one if he served with the NZEF or AIF but that would certainly be my first port of call as pension details on some service records for some men (and WO 364 for UK servicemen is a pension records’ series).
A. Sue: We have his service number and record. He enlisted at 16 in the Australian Infantry but was discharged form the Hospital Unit … unfortunately his plaque at Rookwood has him in the hospital Unit (gassed and buried). Where do I go from there?
A. Paul: I’ll need to defer to my Australian colleagues on Australian medical records per se. Over here, my first recourse would be the local archive but it may well work differently in Australia.
A. Sue: Thank you, Paul! It gives me hope that we may be able to have a greater understanding of my grandfather’s life. It is possible that he spent time in both Callan Park Hospital and Concord Hospital.
A. Paul: Armed with that information, just do some Google searches on those hospital names and you may come up with requests in online forums which could lead you down other research paths.
A. Sue: Thank you!
A. IHM: Hi Sue, re you able to send us your grandfather’s name and / or service number? Unfortunately, a number of WW1 veterans spent time at Callan Park Hospital – here’s some more info from State Records NSW :: http://ow.ly/kpE4m and The Dictionary of Sydney :: http://ow.ly/kpDZR
A. Sue: KIRBY, Thomas Alfred Service Number – 2957 He hung himself in his dental surgery. So, not in a hospital at the time. Thank you for taking an interest.
A. Christine: For Sue – I sent you a message about repatriation paper requests

Q. From Polly: Are NZ military records online?
A. IHM: Try the Auckland Museum database :: http://ow.ly/kpvBM
A. Emma: Hi Polly, yes we do have NZ military records. See this page for the full list http://www.findmypast.com.au/articles/world-records/full-list-of-australasian-records/armed-forces-and-conflict
A. Polly: Thank you, will do.
Q(b): Polly: How does one find NZ Great War Military records from Australia?
A. IHM: Here’s the link to the findmypast.com.au Aust & NZ New Zealand WWI records :: http://ow.ly/kpEJ1
A. Polly: Ah yes, thank you I was pointed in that direction and also the Museum, however the Museum had none of the records I was looking for!

Q. From Link: Any ideas regarding Ernest Frederick Miller (see above) apparently he flew in G for George (the famous bomber) (although could be family legend) once or twice!
A. IHM: G for George is on show at the Australian War Memorial :: http://ow.ly/kjM5h | National Archives of Australia will digitise WW2 records for you :: http://ow.ly/kpwjo
Q(b): Link: Thankyou but when I type his name in I get very little information and it says under access status: Yet to be examined. Does this mean it hasn’t been digitized? I can’t get past his basic info and into his actual record!
A. IHM: Here’s the definition of Meaning of Not Yet Examined :: http://ow.ly/kpxUy
A. Link: Thank you, that helps for now!

Q. From IHM: Gawd only knows where that hour went! Big thanks to Paul Nixon, Neil Smith and Emma Kelly for joining us – we’ll finish by asking you what’s your favourite story you’ve found in the findmypast military collection?
A. Paul: Not a story as such but it was a real thrill to discover my great grandmother’s brother’s service record in WO 97 on the UK site. He joined the army in 1897 and served in the Boer War and WW1. The great thing is too, this is a pastime that never ends. Findmypast digitises a load more records and Bang! Suddenly there are more missing pieces for the jigsaw.
A. Emma: My favourite story was sent in by Helen Stillman about her ancestor Cecilia May Delforce who was a WWII POW. Amazing that she survived that ordeal. You can read the full storyin the Anzac Memory Bank http://www.findmypast.com.au/articles/anzac-day-stories/page-1/helen-stillman
A. IHM: Here’s the link to the free findmypast.com.au Aust & NZ Anzac digital magazine – lots of stories in there as well :: http://ow.ly/kpynN