Home > Blog > Featured > Walking through the past. Historypin at the State Library of Queensland > Customers buying up tea before the price rise, Brisbane, 1954 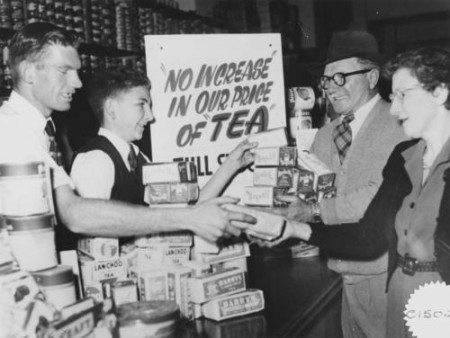 Customers buying up tea before the price rise, Brisbane, 1954

Young shop assistants in Barry and Roberts grocery store, Queen Street, Brisbane, selling stocks of tea to customers after the announcement that the price was to be increased by 1/- a pound, 19 August 1954. It seems the price of tea was a very contentious issue. This price increase was reported at length in the Brisbane Courier-Mail newspaper:

“The Trade and Customs Minister (Senator O’Sullivan) announced last night that the price at which tea was invoiced to merchants at the Tea Importation Board would be increased by 1/ per lb from to-day. Senator O’Sullivan said the retail price of tea would now no doubt be adjusted as a result of this increase. Extent of the adjustment and date of its application were matters for the State prices authorities. £44 m Subsidy – He said the increase in the board’s invoice price arose from a sharp rise in the landed cost of tea. An amount of £4,500,000 had been provided in the 1954-55 Budget for the tea subsidy. The subsidy would average about 1/6 per lb — the same as in the last financial year. The maximum retail price of tea in Brisbane ls 4/8 per lb.” Follow this link to see the original newspaper article on Trove http://nla.gov.au/nla.news-article50587384