Home > Blog > Featured > Walking through the past. Historypin at the State Library of Queensland > Observatory on Wickham Terrace in Brisbane, Queensland 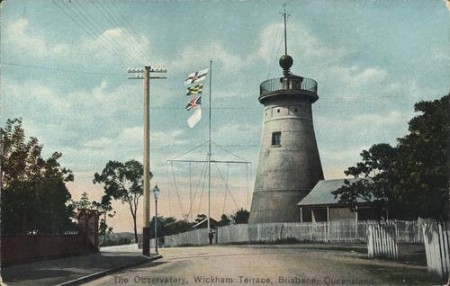 The windmill on Wickham Terrace is the oldest building in Brisbane and is one of only two buildings that still remain from the Moreton Bay penal settlement. It was built in 1828 as a mill for grinding grains and later became an observation tower. After the murder of two members of a surveying party near Mount Lindesay in May 1840, three Aboriginal men were caught, tried, and two of them hanged from of the windmill. It is an enduring landmark, and one of the first street view successes State Library of Queensland had on Historypin!