Home > Blog > Featured > Walking through the past. Historypin at the State Library of Queensland > Sallatina’s butcher shop in Hughenden 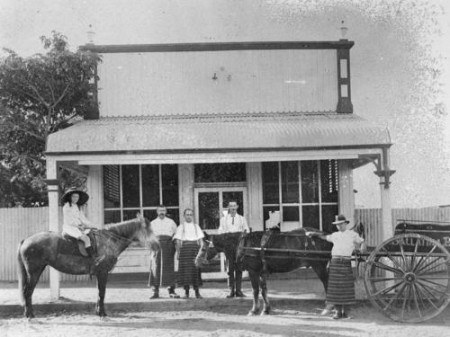 Hughenden is a very small, remote town situated between Townsville and Mt. Isa. This photo of Sallatina’s Butcher shop was taken in 1912 and shows a number of the butchers posing in front of the shop. The Sallatina family were prosperous cattle growers and butchers. The Townsville Bulletin reported in 1950; “Talk cattle you will hear the name of ‘Jos’ Sallatine. From the Gulf to Goondiwindi, but particularly in the North, you will meet him and see the blue ribbons on his stock at the shows. He has the western stations of Mt. Beckford, where he runs the Aberdeen-Angus, and Soda Valley, where he has Shorthorns, and he has Muranie. In addition to these he has important butcher interests.” Three men of the West (1950, June 10). Townsville Daily Bulletin (Qld), p. 3.

For one hundred years after this photograph was taken, there was a butcher’s shop on this site, until Barry’s Meats closed in 2012.