Home > Blog > Featured > Walking through the past. Historypin at the State Library of Queensland > View of the organ and main auditorium at Brisbane City Hall 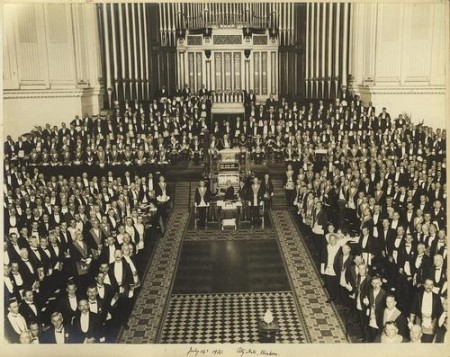 Opened in 1930, Brisbane City Hall is one of Brisbane’s most significant heritage buildings. It was closed for three years for a restoration and repair project and re-opened on Saturday 6 April 2013. The organ, pictured here, is one of the most interesting features of City Hall. The organ was built in 1892 by Henry Willis and Sons of London for the Queensland National Agricultural and Industrial Association (QNA) at Bowen Hills. When the QNA went bankrupt in 1897, the organ was purchased and moved to the City Hall, where it was enlarged and modernised. The organ’s first public recital was on 8 April 1930, the day City Hall officially opened. The formality of dress seen in this photograph is long gone, but the grandeur of the building and the organ remain.
John Oxley Library, State Library of Queensland, Image number: APU-016-0001-0027