Home > Blog > Featured > Walking through the past. Historypin at the State Library of Queensland > Waiting to see Queen Elizabeth and The Duke of Edinburgh on their visit to Brisbane in 1954 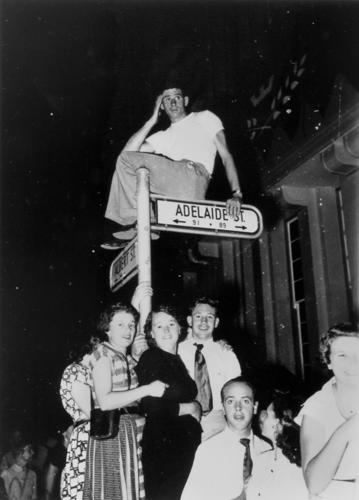 On 3 February 1954 the royal barge pulled into Farm Cove, Sydney and the newly crowned Queen Elizabeth II stepped ashore, becoming the first reigning monarch to visit Australia. The National Museum of Australia, in an exhibition marking the 50th anniversary of this tour noted that almost three-quarters of the population saw the Queen at least once during the whirlwind two month visit. Wherever she travelled there were crowds of people jostling to see her. This photo of a group of Royal watchers was taken on the corner of Adelaide and Albert Streets in Brisbane, as they eagerly waited to see the Queen and Duke of Edinburgh pass by.
John Oxley Library, State Library of Queensland Neg. 147591
http://www.historypin.com/map/#!/geo:-27.471011,153.023449/zoom:16/dialog:9190010/tab:details