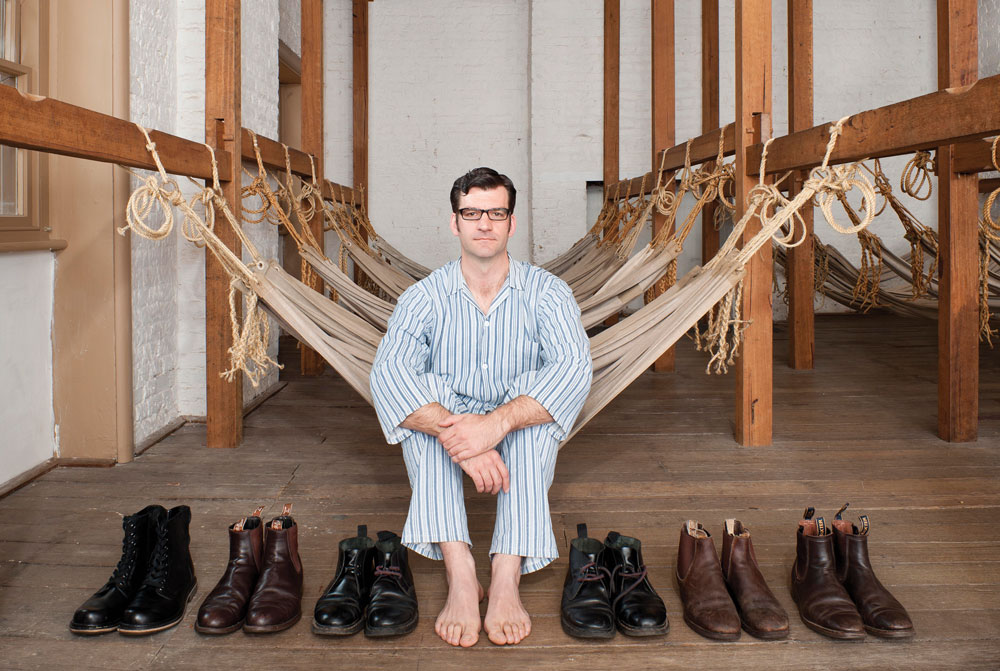 A new exhibition presented by Sydney Living Museums takes a fascinating and unique approach to investigating the impact the crimes and transportation to Australia in the 18th and 19th century has had on the course of many families. Comprising 50 large-scale photographs by documentary photographer, Mine Konakci, A Convict In The Family? explores the connection between convict settlers, their living descendants and the petty crimes that changed the course of their family history.

The sitters — ordinary Australians — are photographed in modern settings such as their home, garden or a public space with an item representing the crime that saw their ancestor exiled. Here, Mine reveals three of the images from the exhibition, and chats to Paula Grunseit about the project…

In a talk entitled What Convicts Left Behind, held in the Greenway Gallery in the Hyde Park Barracks, Sydney, documentary photographer Mine Konakci spoke about her exhibition, A Convict in the Family. Some of her sitters shared their experiences of discovering their convict heritage and discussed the huge shift in attitudes from shame to pride about being from “convict stock”. Sydney Living Museums curator Fiona Starr then revealed some rarely displayed objects that belonged to convicts of the Hyde Park Barracks.

Mine Konakci says her Master of Documentary Photography degree at the University of Sydney was a way for her to combine her love of history and archaeology with the visual arts. “The trigger for the exhibition came when I photographed Anna Nowland, an HSC history student, for a publication about Australian heritage”, Konakci says. “I was quite intrigued by her proud interest in her convict past when she discovered that her ancestor Michael Nowland was transported for life aged twenty-two in 1790 for stealing a horse.” Anna said of the experience of discovering her convict ancestor: “I enjoy knowing where I came from. It makes me a lot more grounded and gives me a strong sense of belonging.”

The works reveal the connections between convict settlers, their direct descendants and the petty crimes that changed the course of their families’ histories. Drawn from a diverse cross-section of the community, sitters have been photographed alongside a representation of the item, or items, stolen by their ancestors. The exhibition consists of forty photos (there were forty-seven sitters in total) displayed with minimal information and in chronological order according to the date of transportation. There is also a short film about the photographic process and a digital loop of photos taken and without the objects.

I was quite intrigued by her proud interest in her convict past when she discovered that her ancestor Michael Nowland was transported for life aged twenty-two in 1790 for stealing a horse.

Samuel Hodgkinson was photographed in the convict dormitory at the Hyde Park Barracks. His ancestor William Bellamy was transported for stealing six pairs of leather shoes. Hodgkinson has studied museums and heritage and is a former employee of the Historic Houses Trust (now known as Sydney Living Museums).

“My interest in convict history began from an awareness as a child that I was a descendant of William Bellamy, a landowner/farmer who came here as a convict”, says Hodgkinson. “I wasn’t surprised about my history but I did have my own epiphany some years ago. I was working at Elizabeth Farm when Mine’s initial email was sent around. She was seeking expressions of interest from people who had convict ancestry and would like to sit for her exhibition. I filled out the questionnaire and in the interim, went on a trip to the UK. I decided to visit the place where my convict ancestor committed his crime; a shopgirl had caught him stealing six pairs of shoes. I went on to Google street view and knew the area would be part of what is known today as the Barbican Centre. Beech St which is near Beech Lane where the crime was committed is now covered over by tower blocks and it’s a traffic tunnel. I still had this romantic notion in my head that there might still be a quaint little shop there somewhere … I thought ‘I can’t just stand here and take a photo of this dead end concrete service lane’ which is what it was, so I wrote a tribute on a piece of notepaper to my ancestor William Bellamy. It said something like: This is your descendant; I’ve come to visit you here where the shopgirl caught you stealing six pairs of shoes and got you sent to the Old Bailey and I shoved it in the jamb of the gate and walked away. As I walked away I thought that I should toast him so I went to the corner pub and raised a glass; I had a pint for Old Bill. The reality of the place was so different from what I had in my head. In terms of sitting for the photograph, I felt like I could really trust Mine, that I was in good hands because she had that clear structure about her technical process that made me feel quite secure.”

Liz Parkinson has eight convicts in her family from both sides of her family but it wasn’t until her father died that she uncovered many of the secrets he had tried to bury forever. Liz’s ancestor Robert Parkinson and a group of men were transported for life for stealing crates of tea.

“I was aware of a couple of convicts in my family because they had done quite well early on. My grandmother told me that one was an Underwood of Paddington; I found out that he had a 100 acre grant there but wasn’t a political prisoner as I’d been told. There’s an Underwood St at Circular Quay, an Underwood House, an Underwood Lane and a plaque commemorating him. This was an ancestor that the family was proud of because he was the first private shipbuilder in Australia. The plaque was put up while my father was still alive but my father didn’t want to know anything about his convict ancestry. He died with all this knowledge in his head. I was given all his papers when he died and a few days after his death, my mother showed me a big trunk and said: ‘You’d better have a look at this dear.’ So, I opened up the trunk and there was all the family history research. And I said:

Mum! Why didn’t Dad tell me anything about this?” She said: ‘Oh well dear, he didn’t want you to find out.

The fact that Parkinson’s father wanted to keep the family history hidden didn’t deter her as she explains: “I found out that in the late 1960s, my Dad had asked well known genealogist Nancy Gray from Scone (our two families are from the same area around the Upper Hunter and knew each other) to ‘do’ his family history. As it turned out, Nancy found all these convicts and my father was totally mortified. My mother said to me: ‘Well! There are no convicts on my side of the family!’ “But there were — I got into researching her side of the family and I found two of them.” Liz then read from a letter which Nancy Gray had sent her when they corresponded about researching Liz’ family history. It says: Thank you for your letter. Yes, your poor dear father made me promise to tell NO ONE [CAPS] what I’d discovered but relented years later and gave the story to a Liverpool Plains cousin who lost her papers in a flood that swamped her car where she always kept them because her grandmother might find them if they were in the house. I was never able to find out who that cousin was but I had a wonderful neighbour who helped me and taught me about research. Liz went on to write books about her family history and says: “I’ve become extremely interested in family and convict history in general because I do have all these colourful ancestors. If my father was alive I think he’d be mortified to know where I’ve taken it.”

Glenda Gartrell is photographed in an abbatoir. Her ancestor William Scott was transported for life for stealing three sheep. “For people of my generation Australian History at school was English History and there was a paragraph about white settlers coming to Australia. That was about it. I was very fortunate in the 1970s to be doing a postgraduate degree and took a subject where we looked at our convict history. Before that, all through the 1800s, as society got away from transportation, people rose through the ranks and had very important jobs. The last thing they wanted discovered was that they had convict ancestry. I’d been brought up with the words: ‘There’s no taint in our family’ and like a lot of things your parents tell you, you hear it but you don’t know what it means and you don’t ask anything about it.”

For people of my generation Australian History at school was English History and there was a paragraph about white settlers coming to Australia. That was about it.

Glenda did a lot of research about her family history and found that her convict ancestor was “a very astute, observant, practical man” who became very successful in his own right. Although he was transported for stealing sheep, he’d worked in the rural area north of London and was classed as a rural worker. Says Glenda: “His good luck was that when he got off the Admiral Gambier in 1811 and stood on the wharf, labour was in short supply and the more eminent graziers were able to go along and select who they wanted. Elizabeth Macarthur selected him as her Superintendent of Cattle. This meant that he didn’t have to find his own accommodation as so many convicts had to. So, he didn’t go to the Hyde Park Barracks but straight out to the ‘wilds’ of Camden. He eventually became very wealthy and owned five and a half thousand acres in the Southern Highlands but he was illiterate.” Of having convict ancestry, Glenda says: “I think now it’s become almost a proud boast.” This wasn’t always the case though and Glenda’s father told her that his mother had told him about all the material that had been burnt trying to get rid of this “terrible secret”. Says Glenda:

As late as 1926, the Government Statistician had made the bold claim that ‘No convict has ever amounted to anything’. “Convicts were written out of history, they were taint. It’s only through places such as Sydney Living Museums and because of all of us, family historians, who have rebuilt the records, that Australia’s history is growing by the day.