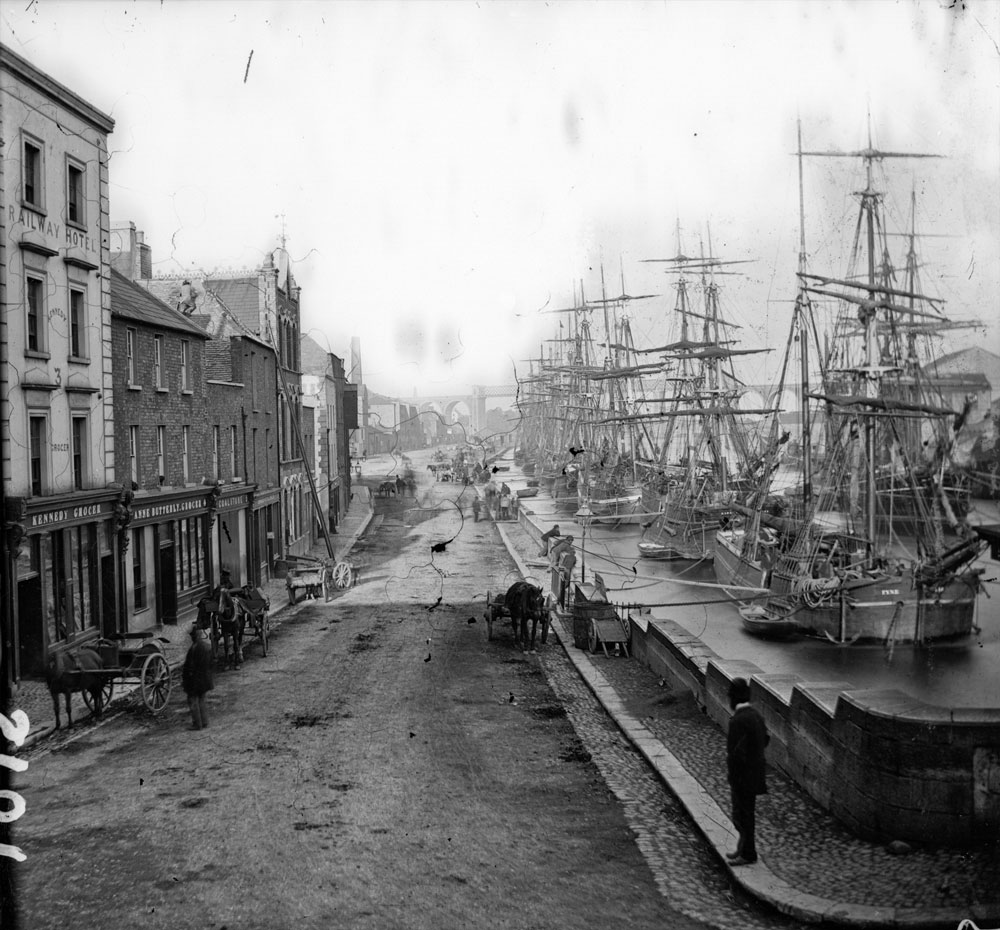 For our Expert Q&A on Thursday, June 6 we had Dr Richard Reid and Dr Perry McIntyre to answer your questions about Irish immigration in the 1800s. Thanks again to Richard and Perry for giving us all the benefit of their time and expertise.

Summary of links from the Q&A:

Our Expert Q&A with the DRs Richard Reid and Perry McIntyre starts in 15 minutes at 8:30pm AEST. Join us with your questions on Irish immigration in the 1800s.

Please ask your questions in a comment below, and Perry or Richard will answer in a following comment.

Comment: IHM: Welcome everyone, thank you for joining us. Please welcome Perry and Richard to tonight’s Q&A!
A. IHM: Tip :: Keep refreshing your browser to see the answers as they appear and remember to look through the entire list of comments, as facebook may order your questions and answers out of sequence.
A. Perry: Hi, Richard and Perry here to help you tonight.
A. Carmel: Hi all!

Q. From Noeleen: My g. great grandmother Bridget Young and her sister Mary arrived aboard the Thomas Arbuthnot in 1850. Bridget was the mother of Kelly Gang member Steve Hart. The book “A decent setof girls” tells me that they came from “Hannahdown” (Sic). I visited Galway last year and saw the famine memorial at Annaghdown. My question: is there any way of finding records of their parents’ deaths etc? I have looked, but maybe not in the right places… and I am not holding hope that there will be records.
A. Perry: Hi Noeleen – Basically no chance. Death registration didn’t begin until the 1860s. There are some rare aeriel registers for Catholics parishes but not for Annaghdown in Galway. Perhaps you should check cemeteries in the area in case there is a headstone. Lots of cemeteries in Galway have been indexed – check for a heritage centre in Galway that might deal with family history enquiries and send them an email about cemeteries that have been indexed – Richard
A. IHM: You can go to Roots Ireland to search records from the East Galway Family History Society ::http://ow.ly/lLo65
A. Noeleen: Thanks Perry. I checked quite a few for headstones and some indexes. Chalk this up to the end of the line in this particular branch.

Q. From Tracey: My ancestors (John Carroll and Catherine Ryan) came from Ireland in 1864 both arrived per Queen of the East and married here just after arrival (June 20). According to the passenger records He was from Clonmore father John from Dunmore Tipperary and Mary (dead); Katherine’s parents were Daniel Ryan (Clonmore) and Margaret (dead). This information was found on Tipperary Index on the internet at this link (click to view) – Can you suggest where I start for Irish records – I do not know where these places are?
A. Perry: Alphabetical Index to the Towns and Townlands of Ireland published in 1861 for the 1851 Census has no Dunmore in Tipperary. There are 5 Clonmores listed in Tipperary in different parts of the county. You will really need to determine which of these Clonmores the Ryans came from before attempting to look for records in Ireland. Marriage, dead and births of their children in the colony should help with this – Richard and Perry
Q(b): Tracey: Thank you – can you point me in the direction of the towns for Clonmore or the index you speak of? Also do you know is there only 1 Dunmore (anywhere in Ireland).
A. IHM: The IreAtlas townland database at :: http://www.seanruad.com
A. Tracey: Thanks
A. Tracey: Are the irish births,deaths, marriage records in one place or in each parish please?
A. IHM: You can search Irish Civil Registrations on FamilySearch :: http://ow.ly/lLr9z | Roots Ireland :: http://ow.ly/lLrnm | Findmypast Ireland :: http://ow.ly/lLrzE
A. Perry: I  assume you mean Civil Registration which did not start in Ireland until 1864 so many of us are second or even third generation Australians by then! They are at the GRO – General Register Office – Dublin which have a search room at the Irish Life Centre in Abbey Street, Dublin and are on some websites. Before 1864 you are reliant on parish registers and need to know the parish and whether they were Catholic or Church of Ireland – lists of surviving ranges of parish registers are on the National Library of Ireland’s website. For the 6 Counties of Ulster part of Northern Ireland since 1922, the BDMS are in Belfast. Perry
A. Tracey: Thank you very much Perry and Inside History – I appreciate your help.

Q. From Clancy: Hi Richard and Perry. According to my great grandmother’s death certificate, her mother is unknown but her father was Patrick Murphy. My grandmother told me he arrived with his family in the mid 1800s, My grandmother is reported as being born in Sydney in 1881 but I have not been able to find a record that fits. Do you have any tips to help me narrow down likely Patrick Murphys?
A. Perry: Hi Clancy, Murphy is the most common surname in Ireland. The fact that his first name is Patrick doesn’t help. Undoubtedly there were would have been hundreds of Patrick Murphys who came from Ireland in the 19th century. Mid 1800s doesn’t really help you a lot. You really need to try and see from death, marriage and birth certificates if you can get an approximate date on this guy. Good luck with a name like that! – Richard.
A. Kerry: That’s similar to me Clancy, says on certs of her kids birth born in Sydney but no records no marriage no death and no immigration only record is birth of her children that is it.
A. Perry: They MUST have at least died and, if you are a descendant, had children so you have to search further and purchase certificates. The indexes to Aus BDMs are mostly on line now.
A. Kerry: It states on my mans death cert her mother was Elizabeth Hutchison but it not true her.mum was Elizabeth mead so not Always true. Elizabeth age changed three times on her kids birth cert I learnt my relatives love to hide a few details not sure why.

Q. From Jan: My Irish gg grandparents married in St Pancras in 1851 before coming here in 1853 – Edward Sarsfield & Mary Leonard. Edward was born abt 1823 in County Wexford. His father is also Edward Sarsfield occ Farmer/Labourer apparently dead before 1853. I have reached a total blank from here back. I cannot find out anything more about the Sarsfield of County Wexford. Any suggestions please ?
A. Perry: Hi Jan, do you know what denomination they were – Catholic, Protestant? – Richard
A. Jan: Roman Catholic – I have no town in County Wexford but possibly thought could be Wexford itself but just a guess. Once in Australia the surname becomes Sarchfield but prior to this seems to be Sarsfield.
A. Perry: My suggestion is that you look for the name Sarsfield in the indexes to the Tithe Applotment books for Wexford, produced between 1823 and 1838 and the Tenement Valuations for Wexford (known as Griffith Valuations) produced in 1853 for Wexford. That will help you to see if the name Sarsfield crops up in that county and in what areas. Sarsfield is not a particularly Wexford name, more associated with Limerick but it doesn’t mean it’s not there in that county. – Richard
A. IHM: Search the Griffith Valuations on Ask About Ireland :: http://ow.ly/lLr2T
A. Jan: Thanks Richard – I think I’ve gone down that road a while ago. Yes Sarsfield is quite a famous name in Limerick – just got to try and make a connection some where. Anyway might just have to go over and search the Parish records in person  thank you.
A. Perry: Did you look at Griffith and the Tithe Applotment? – Richard
A. Jan: Yes I think so but long ago, will try again – thank you for the link to Griffith’s Valuation – I will start looking.

Q. From Carmel: I have Mary Anne (Annie) Hart born c 1806 Ballinrobe, coMayo. I have no idea who her parents are but she married in Lancashire then the family came to Australia in 1849. would love that step back! Where do I start?
A. Perry: Hi Carmel, how do you know for sure she was born in Ballinrobe? – Richard
A. Carmel: It was stated on her death certificate. (so it has to be true!)
A. Perry: Really! I’m sure that’s right but one must always wonder at the informant’s knowledge when they gave such information. The family name Hart originally comes from Co Meath and these families were pushed to the west after the Norman invasion so they have probably been in Mayo for quite a while. Unfortunately there are no Catholic births or marriages that far back for Ballinrobe ie 1806 so all you can hope for is the occurance of the name in some other record – for example, there is a list of Ballinrobe householders for 1783 in a magazine called Analecta Hibernica volume 14. There is also something known as Spinning Wheel Premium List with 1900 Mayo names from 1796. – Richard
A. Carmel: Can these be found on line anywhere or where can they be accessed?
A. Carmel: I am fully aware of information on death certificates, but it was her son in law who was the grandson of a minister and at 17 filled out his father’s certificate with extra information so trusting him to check!
A. Perry: There are 8 Harts on the Spinning Wheel Premium List for 1796 in Mayo – see http://www.failteromhat.com/post1796.php. – Richard
A. Carmel: Thank you I will have a look at this
A. IHM: Analecta Hibernica volume 14 is available on JSTOR :: http://www.jstor.org | You can access JSTOR via your National Library of Australia card :: http://ow.ly/lLsjw

Q. From Peggy: My G Grandfather John O’Rourke, his wife and 10 children came from Limerick, Ireland in 1884 to Sydney, Australia as unassisted immigrants. His sponsor was Michael McGirr 163 York St Sydney. I have been unable to find out who Michael McGirr is. How did the sponsorship work…did the sponsor have to be related to the family?
A. Perry: Usually if you had a sponsor it meant you were assisted so I’m a bit confused here. By 1884 you can look at directories in Sydney which shoud pinpoint Michael McGirr
Q(b): Peggy: The immigrations records are confusing as some showed them as unassisted and yet others showed them as assisted? confusing. From your reply they must have been assisted due to them having a sponsor. Did the sponsor have to be related? What were the rules around being a sponsor? (thank you)
A. Perry: Hi Peggy, a sponsor could be a friend as well as a relative. There are records relating to all this in State Records NSW – Remittance Deposit journals, these have been indexed. There are also regulations relating to age, occupation etc if you received an assisted passage sponsored by a friend or relative. – Richard
A. Peggy: Thanks for the information Perry.