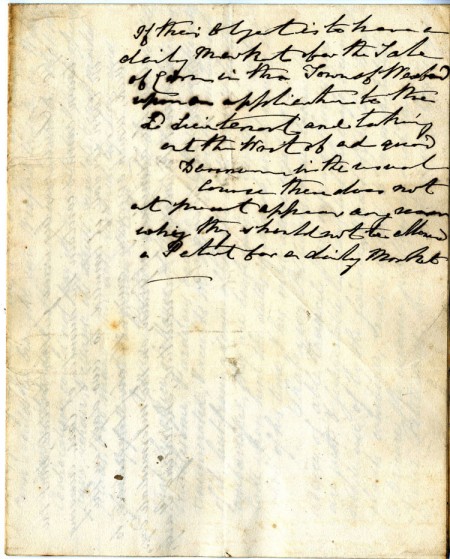 Petition of the Mayor, and Corporation of Wexford, to Earl Talbot, Lord Lieutenant, Dublin Castle, requesting permission to hold a daily corn market in the town of Wexford. Explains that in the past, on each day of the week, sellers coming to the town have paid a toll on all corn disposed of in the market; but recently, a movement has arisen in opposition to payment of tolls to the corporation, except on Wednesday and Saturday, causing a marked reduction in revenue. They assert that due to this action ‘the Mayor by advice of Council, has continued, to make every exertion to enforce the amount of toll, in kind, as usual, on the intermediate days of the week; he has been resisted and abused, his constables and himself threaten’d, and such force, and resistance given to them, that they are utterly inadequate to overcome; without having recourse to military assistance’. Signed by Arthur Meadows, mayor.
Image courtesy of National Archives of Ireland, CSO/RP/1818/635