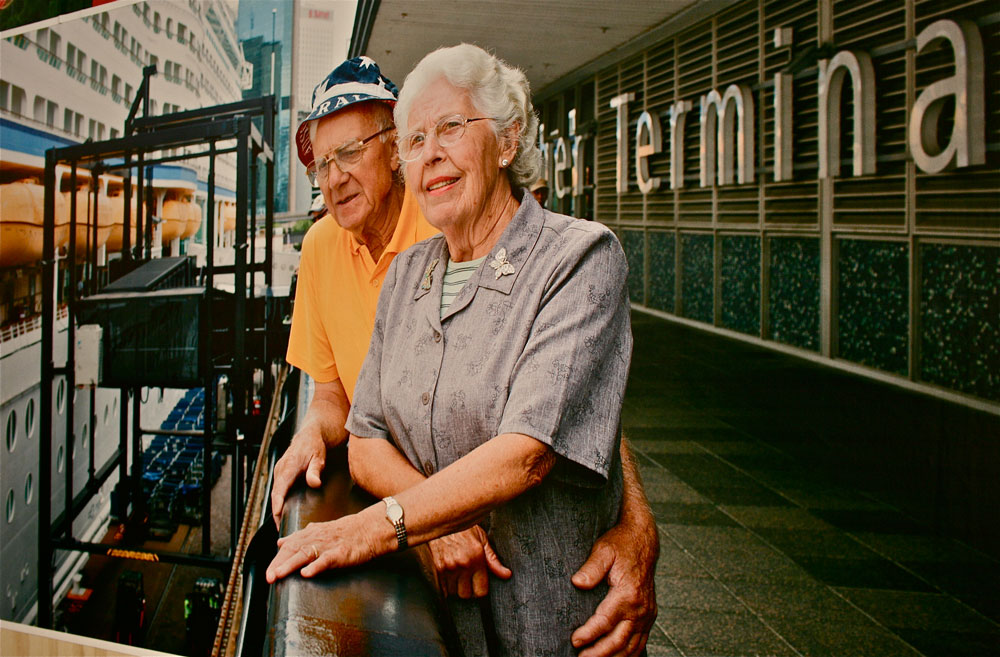 Presented by Sydney Living Museums, Public Sydney: stop, look, live! is a new exhibition at the Museum of Sydney. Through photography, objects, film and storytelling, the exhibition features Sydney’s best loved public spaces and the stories of the people who use them. The exhibition was inspired by the Sydney Living Museums’ involvement in the recent publication of a wonderful book — Public Sydney: Drawing the City — by award-winning Sydney architects Peter John Cantrill and Philip Thalis.

Donald and Rita Roberts will always feel a connection to ships whether they’re watching them at the Overseas Passenger Terminal or travelling on them when they take a cruise. Arriving in Australia as “ten pound poms” on the Fairsea in 1966, life wasn’t all plain sailing. Donald explains. “We were living in Lancashire where it’s damp and rainy. We had a family of four — an eldest boy, a middle girl, and twin boys. When the twins were three months old, they caught Whooping Cough and they were so sick that I was actually resigned to losing one of them. They were in an isolation hospital and we even got the local pastor in to baptise them.

They both pulled through and a short time after that, I was reading a newspaper article that said: “In Australia there are hours and hours of sunshine every day’ and I thought that if we went there, maybe these two little boys wouldn’t get into that situation again. I was a carpenter and Rita was at home looking after the children. We didn’t have much money (we never did) but I said to her: ‘We’ve got to give it a go’”. The six-week long trip was “a bit of a slow boat to China” but on arrival in Australia, they spent eighteen months at the Villawood Migrant Hostel. “It was a very good setup”, says Donald. “You were fed and you didn’t pay any rent until you had a job. When I found work as a carpenter at the Holsworthy Army Camp, we were able to afford a rented house.”Donald then landed a job “way out past Coonabarabran”, a decision he still questions.

For four years, he worked twelve-hour days, seven days a week with a home visit permitted only once a month. “I earned a lot of money so we could put a deposit on a house but looking back, I know I missed out on four years of seeing my children growing up.”

These days, the Roberts love getting around Sydney by public transport. Whether it’s a visit to Customs House, catching a ferry to Watsons Bay or to Circular Quay from Parramatta. “When you’re driving you don’t see anything and the traffic is terrible”, says Donald. “Sometimes, we just walk and wander”, he says.

Public Sydney is on display at the Museum of Sydney until Sunday 8 September 2013 and is FREE.

Thanks to Paula Grunseit for another terrific story. Click here to read more from Paula.

Poster with the slogan ‘Australia Land of Tomorrow’ designed by Joe Greenberg, and produced by the Department of Immigration, circa 1948. It was produced to promote immigration to Australia. These posters were displayed in Displaced Persons camps in Europe. Courtesy of Museum of Victoria