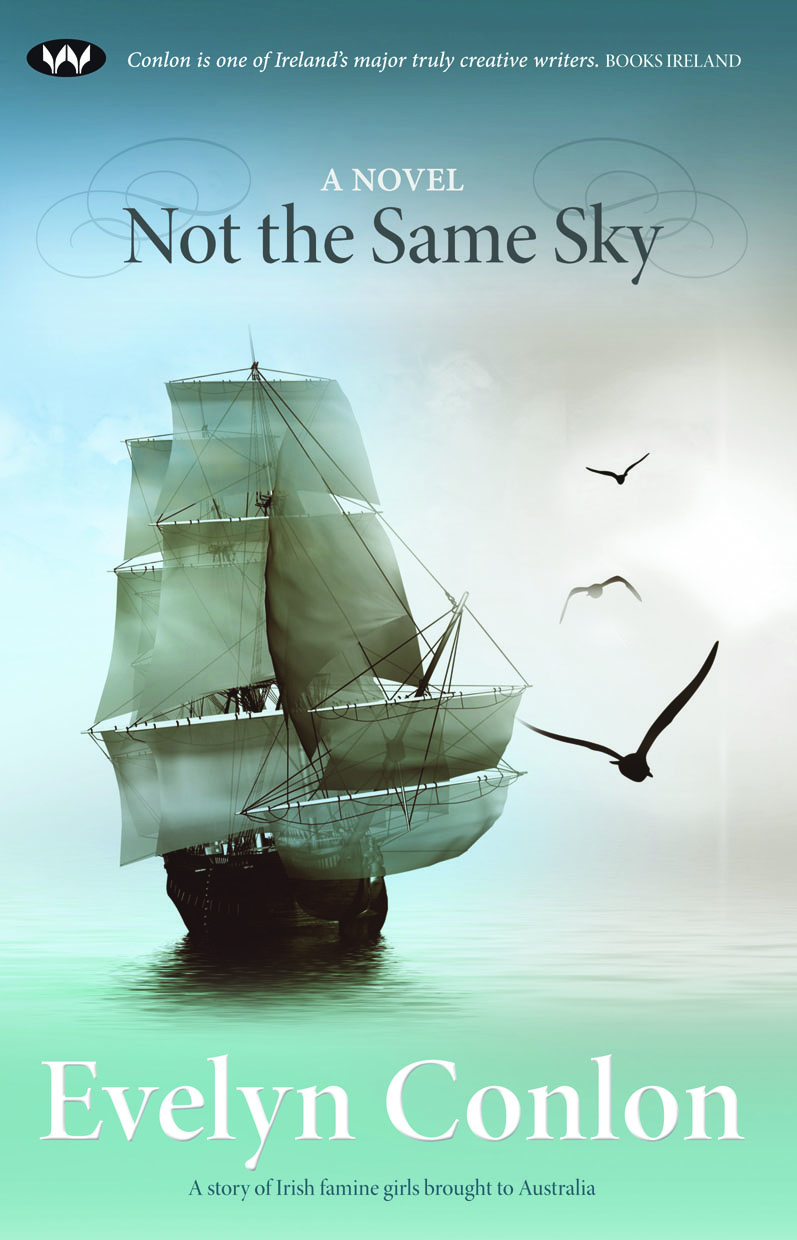 On Saturday, Inside History attended the launch of Not the Same Sky, a novel by Evelyn Conlon about four young Irish famine girls sent to Australia aboard the Thomas Arbuthnot. Jeff Kildea, a historian and Adjunct Senior Lecturer at the UNSW’s Global Irish Studies Centre, launched the book.

Jeff has written extensively on Irish Australia, from his article on St. Patrick’s Day in issue 16 of Inside History (click here to learn more), contributions to the Dictionary of Sydney, and his book Anzacs and Ireland (2007).

We enjoyed Jeff’s speech at the book launch so much that, with his gracious permission, we decided to share excerpts of it here. It was a thought-provoking speech on journeys: from the famine girls’ voyage to unknown shores across the world, to the journey of discovery and research undertaken by historical fiction authors such as Evelyn, historians and family historians alike.

Life is often compared to a journey. Perhaps that’s why novelists frequently use a journey narrative in their writing as a way of examining the deeper meaning of life. In Not the Same Sky we have two such narratives, each describing a journey from Ireland to Australia – one of the longest you can take – but separated in time by about 160 years.

One is a journey of months by ship, the Thomas Arbuthnot, by a group of famine orphan girls who end up staying in Australia for the rest of their lives; the other a journey of hours by Joy Kennedy, a stonemason who comes by aeroplane and stays but a few days before returning home. “It’s very far,” Joy tells people on her return – and don’t we know it. But both journeys turn out to be transformative.

And that of course is one of the things about journeys. Once we leave the ordered existence of our known world – our comfort zone, perhaps, if we are so lucky – we are susceptible to contingencies beyond our contemplation.

At this point I should disclose that I first met Evelyn on a journey. It was about ten years ago and we were both flying from Ireland to Australia. I had been there researching my book Anzacs and Ireland and Evelyn was on her way to Australia to research what is now Not the Same Sky. As our plane was approaching Sydney we found ourselves standing next to the window of one of the exit doors and we got chatting and we learned of our mutual interest in Irish Australia. Since then we have become firm friends, visiting each other when we travel to other’s country. That’s one of the great things about journeys – they change your life.

And so too with the characters in Not the Same Sky. Their lives are transformed by their journeys. Honora Raftery, Bridget Joyce, Anne Sherry and Julia Cuffe among others have been recruited from workhouses and, in a sense, are made an offer they cannot not refuse – emigration or starvation. Surgeon Superintendent Charles Strutt, their supervisor and protector, tells Julia, “But you had a choice. You all had a choice, well you could have said no, I think…” To which Julia responds, “Some choice.” (p. 118)

To the orphan girls on the Thomas Arbuthnot everything is new: the vast ocean, which many had never seen before; life on board ship, which Evelyn describes in intimate detail and with great wit and poignancy; and the changing sky, which gives the novel its title. As the ship travels south the familiar North Star, that stationary symbol of steadfast certainty always indicating north, disappears over the horizon to be replaced by an ambulatory cluster of southern stars, familiar to us but previously unseen by the girls. The change dawns on them: “Imagine,” says Anne Sherry. “Even the stars won’t be the same. It’s like leaving again.” (p. 77)

But more bewildering than the night sky is their new home’s unfamiliar landscape, with its muted colours, its pale greens and yellows and browns, so well captured on canvas by Tom Roberts and the Heidelberg school. And so well captured in words by Evelyn in Not the Same Sky.

For, unlike the orphan girls, Evelyn is no newcomer to Australia. She has made the long journey many times and has travelled far and wide across this country. In the early 1970s she even spent six months at Mount Isa, working at nights behind the bar in a pub, learning to write, as she puts it. Clearly, Evelyn also learned to read well the landscape and the people. So much so that the descriptions of the bush that appear on the pages of this book will be very familiar to native Australians. The contrast with the landscape of Ireland which the girls leave behind is stark and Evelyn, as a native of Ireland and an honorary Aussie, is well placed to describe the orphan girls’ reactions to their new surroundings….

In Not the Same Sky Evelyn dares us to contemplate change, the re-­arrangement of the truths of our life, with all its dangers, just like the orphan girls and Joy Kennedy were forced to do.

Although we tend to use the collective term “famine orphan girls”, Evelyn reminds us that each is an individual who has her own way of facing up to the challenges of change. In that sense the novel is about multiple journeys in which some survive; some do not. Of those who survive, some do well; others do not. Not the Same Sky is a story of life’s lottery and not all are winners.

And Joy Kennedy’s latter-day journey is different again. She has been brought to Australia by friends of the Famine Memorial Committee to advise on an appropriate memorial to the orphan girls. Her journey to Australia is one more familiar to us, living as we do in the age of jet travel. After all, not many of us have made the long journey by ship and then ridden on a dray from Sydney to Yass….

But our familiarity with Joy’s journey goes beyond mere means of travel – we live in the same era. However, we are not so familiar with the lives of the orphan girls and the challenges confronting them. Faced with the existential reality of their geographical displacement, they had to come to terms with their new home and a new land. And Evelyn spends much of the novel describing with wit and insight how each of the main characters does just that.

But the orphan girls’ challenge is not Joy’s challenge. Her challenge, and ours too, particularly those of you who are descendants of the orphan girls, is to understand who these girls were and how they lived and survived. It is something beyond our direct knowledge. Displaced in time, we cannot travel with them on their journeys. We, like Joy, must go on a different journey if we are to discover the truths about these girls. The problem is one of memorialisation. How do we remember them when we never knew them as persons.

Once again, Evelyn is well placed to explore how Joy goes about addressing this problem. As a native of Monaghan, a county in the Republic that borders Northern Ireland, Evelyn knew well the wretchedness of the recent Troubles. It was brought home most starkly in May 1974 when a loyalist bomb went off in Monaghan Town killing seven people. On the same day, three bombs exploded in Dublin, killing 26 persons. In Monaghan a monument was erected in the town near the bomb site.

But in preparation for the 30th anniversary of the bombing, Evelyn was asked by the Monaghan Memorial Committee to compile and edit a memorial anthology of works written by people born or living in Monaghan, including family members of those killed, and comprising short stories, essays, poems and excerpts from novels. The resulting anthology entitled Later On stands with the monument in the town square as a moving and fitting tribute to the victims of the bombing.

Like Evelyn did when compiling Later On, Joy Kennedy has to research her subject, in this case the famine orphan girls, and to do so she reads widely, she visits archives and graveyards, she takes the long journey to Australia, she travels to country towns where the girls lived or passed through. Evelyn describes Joy’s anguish and uncertainty as she undertakes the task. One cannot help but think that there is a deep personal reflection here. Writing a novel is not an outer body experience and no doubt Joy’s and Evelyn’s paths crossed many times. For the challenge of the stonemason and the novelist are not dissimilar.

How do you memorialise these young women in a way that is appropriate, that bridges the temporal gap of understanding to bring them to life for us as real persons.

…. Whatever may have been Evelyn’s misgivings, channelled through Joy Kennedy, in my humble opinion, Not the Same Sky is a fitting tribute to the orphan girls, that bridges the temporal gap of understanding to bring them to life for us. Just as Evelyn’s memorial anthology Later On complements the sculptured monument in Monaghan, so too does Not the Same Sky complement the sculptured monument in the Hyde Park Barracks.

Grounded in detailed research, in part it reads like history. But it is much more than that. Historians are constrained by the facts as they find them. A novelist, while still being faithful to the essential facts, can go that one step further using imagination to elaborate, embellish and entertain; to bring raw facts to life; to vest the characters with a humanity that brings them closer to us. As an accomplished novelist and short story writer, Evelyn does this brilliantly, tapping into our emotions as we follow the progress of the orphan girls on their journeys. Unlike the orphan girls, Joy returns home to Ireland and normality gradually returns to her life. But really it doesn’t. It’s too late. Joy has changed and been changed. “I don’t know what memorials are for now,” she says. “Why pick one thing and not another?” (p. 249) In the end we might conclude that perhaps it’s only migratory birds that can journey without change.

I could go on, peeling back the many layers of this multi­layered, carefully researched, beautifully written novel. But I think the better course is to launch it on its journey so that it can change us.

I declare Not the Same Sky officially launched in Sydney.