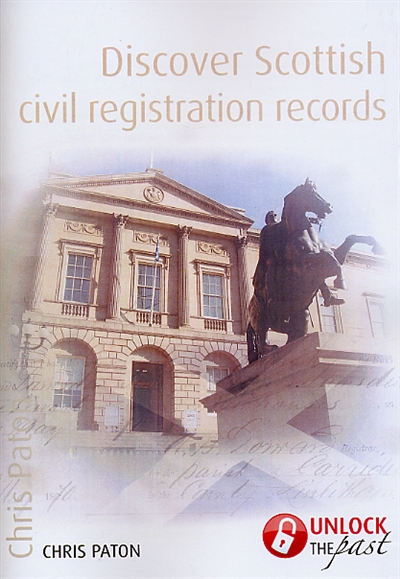 This week we talk to Chris Paton, author of Discover Scottish Civil Registration Records and many other great books for tracing your British ancestors. Originally from Northern Ireland, but with both Scottish and Irish roots, Chris holds a Postgraduate Diploma in Genealogical Studies and work as a professional genealogist, running the Scotland’s Greatest Story research service.

Discover Scottish Civil Registration Records takes a look at the vast world of Scottish civil registration records. Scotland commenced the statutory registration of births, marriages and deaths within the country in 1855, some seventeen and half years after a similar process had already got underway in England and Wales. The information lost to the family historian by such a late start is, however, more than made up for by the fact that Scottish registration records are the most detailed of all those found within the British Isles.

Chris will be visiting Australia for the 4th Unlock the Past history & genealogy cruise in February 2014 and will be talking in Brisbane, Canberra, Melbourne, Adelaide, Hobart, Sydney and Perth before, during and after the cruise. Hope to see you there. And don’t miss the cruise, the last few cabins are booking fast!

Chris: I spent twelve years working in the media industry, producing and directing television documentaries, and was always fascinated by other people’s stories. As a child I knew little about my own background – my parents divorced when I was young, as did both of their parents, so I had no real sense of family. With the advent of my first son in 2000, I decided to look into my own background, as I didn’t want him having the same lack of identity I grew up with. I already had the research and writing skills from media work, so redirected them to something a little more worthwhile.

IHM: Q. Which resources did you find most helpful? Favourite website?

Chris: There’s too many to note, but possibly my most used are that of the Public Record Office of Northern Ireland, particularly for its wills and valuation records collections, and Emerald Ancestors, a Northern Irish vital records site. For my Scottish side, the National Records of Scotland catalogue is a regularly used tool.

Favourite library? The Mitchell Library in Glasgow, Scotland – no contest!

IHM: Q. What resources did you come across when researching your books that hasn’t been widely used?

Chris: Possibly the one I learned most about was the vaccination records. Vaccination was compulsory in Scotland from the 1860s to the 1940s, and the registration of a birth was only the start of the process, as you then had to have your child vaccinated. The records are never discussed, but some registers are still held – they are essentially copies of the birth registers held at a local level which record if a child was ‘vaccinated’ or ‘insusceptible’ of vaccination. But there are various other record types that were also generated from this, particularly for those who refused to have a child vaccinated, and who in some cases were prosecuted for it.

Chris: Not so much in this one, but in a previous book, Tracing Your Irish Family History on the Internet, I explained how I made the discovery that a great great granny of mine called Florence, from Belfast in Ireland, turned out to have actually been born in Gibraltar, to two parents who married in Corfu, one from Dublin, the other from India, who then travelled to Bermuda and had another son. At this point the father died, the mother returned to Ireland and remarried, but wee Flo ended up in England, married there, then had a son in Scotland, at which point she then moved to Ireland. It was a case of going around the world in 80 records – Michael Palin had nothing on my lot…!

Chris: Yikes, loads of stuff! I have a great great grandfather born in the late 1830s in Glasgow and he has been a brickwall of mine for 13 years. I know everything about what became of him, and even the alleged names of his parents, but it’s just not happening! The killer of my three times great grandmother would be another – I featured the story of her murder in Perthshire 1866 in a book called The Mount Stewart Murder, and although a man was tried, the case against him was found non-proven in Scots Law, so he walked away. I’d also love to find the ship’s log for the month in which a collision between a British and a Russian submarine happened in the Cold War. My father was on board the British vessel, but although the logs from the month before and after are available at the National Archives in England, the record of the incident itself is conveniently ‘missing’, despite the thirty year closure rule having long expired.

Chris: Write for your reader, not for yourself. Someone coming to your work may have no idea about the subject you are addressing, so you need to be with their point of view as they engage with your book and then bring them along with you as you develop the story or the thesis. Avoid jargon, unless you need to use it – in which case explain it! – avoid repetition, don’t waffle, and don’t be too flowery with your words. And never assume your first draft means “job done”, if possible get someone else to read it and to be brutally honest about it. With the books I write for Unlock the Past I have a great editor, Rosemary Kopittke, who bombards me with lists of errors and fudges I didn’t quite get away with, and the books always come out much stronger for it. Above all else, don’t sit there thinking “I’d love to write a book, but I don’t now how” – just do it!

Chris: It wasn’t such an issue for this one, as this is more of a guide, but with The Mount Stewart Murder I tried to put myself into the place of all those involved. I had great newspaper coverage of the murder, investigation and trial, which really helped, as well as the trial papers themselves, but I also visited the locations involved, and read up on as much as possible, including a book about the local dialect of Scots spoken in the region at the time. It all helped to build up a more realistic picture.

Chris: If it sits on my desk as a reference book, because I write books that I want to use myself, as much as for anyone else. I constantly refer to my Tracing Your Irish Family History on the Internet and Discover Scottish Land Records books, for example, in my daily work as a genealogist – they are both well worn already. Good reviews and sales also help, but not every book I’ve written makes money – I didn’t make much from The Mount Stewart Murder, for example, but then that was never originally intended for publication. It was written for my two boys, essentially to carry a family story forward a few more generations, and to help them understand a basic principle best described in Scottish Gaelic:

cuimhnich air na daoine o’n d’thàinig thu – remember those from whom you came.