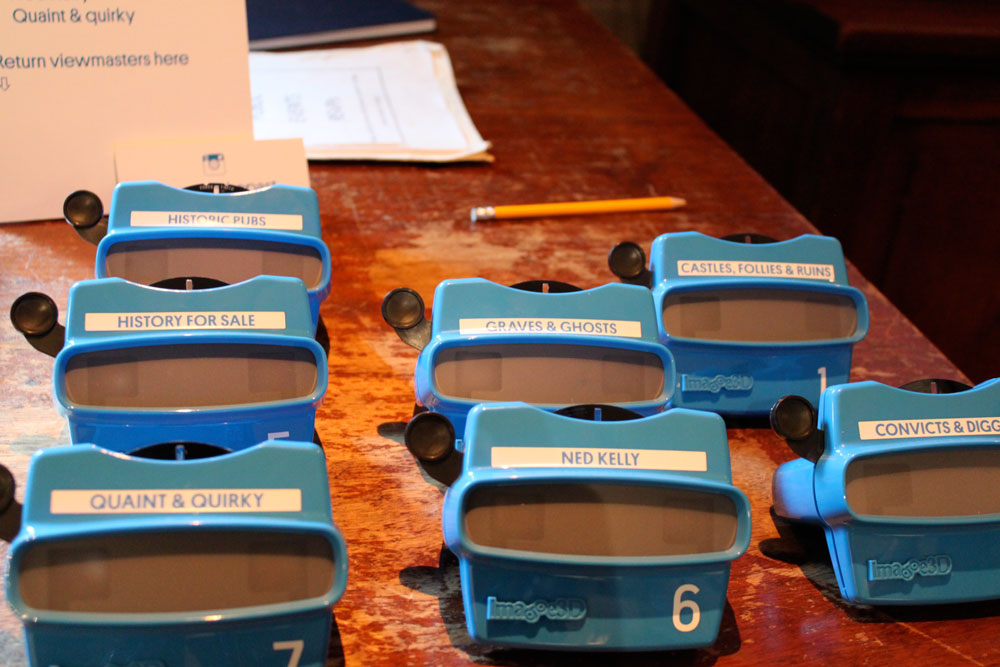 Chloe Okoli, a winner of Inside History’s 2nd Annual Genealogy Blog Awards, blogs about 19th and 20th century Australian history at http://chloeokoli.com. In this special guest blog, she takes us through the new Touring the Past exhibition at the University of Sydney’s Macleay Museum, stopping off at a number of important historic sites around Australia along the way.

The convict settlement at Port Arthur is a major tourist destination, and everyone knows about Ned Kelly’s shootout in Glenrowan, but this hasn’t always been the case. Touring the Past: Tourism and History in Australia is an intimate exhibition currently showing at the Macleay Museum at the University of Sydney that explores the growth of historic tourism in Australia and how Australians began to discover they had a history worth visiting.

Curator Associate Professor Richard White, a historian of travel, tourism and popular culture in Australia, wanted to explore “the way a new society starts to learn that it’s old.”

When Mark Twain visited Australia in 1895 he said that “Australian history is almost always picturesque: indeed, it is so curious and strange, that it is itself the chiefest novelty the country has to offer.”

Touring the Past explores the history of Australian tourism, as Associate Professor White believes that “there’s been that tendency to see real history as being somewhere else… you go somewhere else for the historic experience.” Yet this exhibition shows that there is much to see right here at home.

Historic sites were initially those landmarked by explorers where monuments were erected to show that these places were worth visiting. Tiny replicas, such as Cook’s Cottage and a monument to the Hume and Hovel expedition of 1824, are great examples.

Indigenous people were also involved in historic tourism – from selling artifacts to acknowledging sites of conflict – yet their exploitation and being viewed as a “dying culture” early in the 20th century makes this a complex subject, that needs more detailed and in-depth exploration.

The convict past is another theme that looms large in Australian historical memory. The development of Port Arthur as a tourist site is a case explored in the exhibition. When it ceased being a prison in 1877, the Tasmanian government wanted to demolish it and change its name to Carnavon, but they gradually realized the potential of the site that could offer a macabre experience to the thrill-seeking tourist. Associate Professor White is particularly interested in this type of “dark tourism”.

As successive governments and “respectable opinion tried to suppress to some extent the convict past” in the national narrative, they instead turned to the explorer and “the pioneer tradition.” Yet this “respectable” history failed to appeal as more people were “drawn to places of trauma” such as the old convict settlements, shipwreck locations and Aboriginal conflict sites – the darker side of Australian history.

The convict ship Success was exactly the kind of dark experience that tourists wanted in the late 19th century. After the Success ceased to be a prison, an enterprising entrepreneur who saw its tourist value set it up as a floating exhibition, filled with waxwork criminals to give people a look inside the grim criminal world. It sailed around Australia, then England and America, but as the years went by the exhibition became more extravagant and removed from its original state. Bushranger Harry Power served time on the Success and later become a tour guide. On show is an amazing replica model of the vessel, as well as souvenirs, photographs and guidebooks from the famed convict ship.

Another famous bushranger who needs no introduction is Ned Kelly and the exhibition explores his enduring presence in Australian historic tourism. Souvenirs from Glenrowan sit alongside the armor that Mick Jagger wore during the filming of the Ned Kelly movie.

A growth in local history at the start of the 20th century fuelled the explosion of ‘back to’ local town celebrations, where local stories of pioneers and explorers were told alongside those of Indigenous stories. Notable is the famous Dog on the Tuckerbox statue that was unveiled by Prime Minister Joseph Lyons in the Back to Gundagai celebrations of 1932.

It was during this time that ordinary people began visiting historic places and writing about their experiences and encouraging others to do the same. Frank Walker and Frank Clune retraced the steps of explorers, writing and sketching their tales, while James Tyrell operated a curio shop of Australiana that fueled an enthusiasm for the past. This interest transformed into a nostalgia for the past that culminated in the creation of historic theme towns such as Sovereign Hill and Old Sydney Town, which both opened in the 1970s, with more ‘pioneer villages’ soon following, giving people an ‘authentic’ experience of colonial life. Buying souvenirs and taking photographs were all part of the tourist experience at these historic sites.

Associate Professor White said that after the boom decades of heritage tourism in the 1980s and 1990s, the historic tourism sector was in decline, but that “we’re trying to encourage more of it with this exhibition”.

Historic tourism in Australia might take a different direction in the future. White believed that a sort of ‘self-conscious’ tourism might emerge where people are interested in seeing what it was like to be a 1920s tourist in the Blue Mountains. Ideas like this are already incorporated into places like Port Arthur where the original hotels are part of the historic experience. He also thought that Mary MacKillop pilgrimages might become popular as “Penola in South Australia is already building on the tourism potential of Mary MacKillop’s association.”

A nice twist is that certain elements of the exhibition mimic a real historic theme park. You can take a photo of yourself with a cardboard cutout of Ned Kelly or a convict or even a colonial family, while on the entrance desk you can use a retro viewfinder to see historic snapshots taken around Australia.

These experiences are another way to get you thinking about what it is you are looking for when you visit a historic place in Australia. It was a great idea to provide a spot for reflection at the rear of the exhibition, where you can sit on a couch, help piece together a jigsaw puzzle on the coffee table, and flip through books and brochures of historic Australia. People will continue to visit the historical sites of Australia and this exhibition helps us to understand the past, but to also think about the future of historic tourism in Australia.

Touring the past: tourism and history in Australia is FREE and is showing at the Macleay Museum at the University of Sydney from 26 August 2013 till 14 February 2014. Click here to directions to get there.