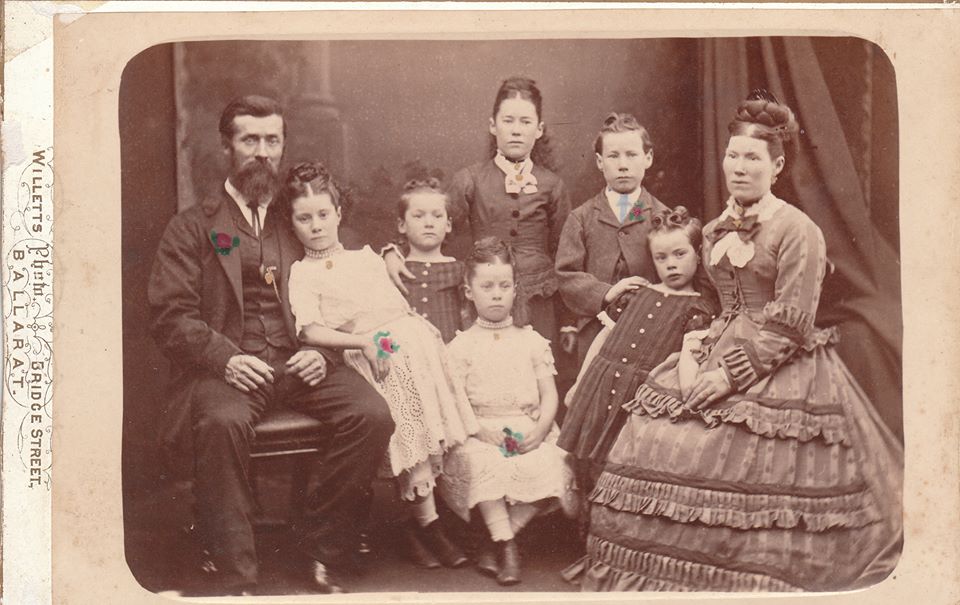 From time to time, our lovely family of readers send us questions and we ask the help of our friends in the societies, libraries, archives and museums across the country to help. This week we speak to curator Margot Riley, the State Library of New South Wales resident fashion historian.

I would love to find out who this family is. The picture belonged to my grandmother – Elsie Hutchinson nee McWhirter – and I would think it was a family member. The picture has been cut to fit in a frame.

This Paris Panel photoprint shows a charming group portrait which can be dated to about 1874-76 by the visual evidence supplied by the dress and appearance of the sitters and confirmed by the photographer’s details appearing along one side and on the reverse of the mount.

George Willett is recorded as a photographer operating at Bridge Street Ballarat between 1875 and 1883 in Niven’s Ballarat and District Directories, with a previous studio in Sturt Street in 1869. As no Ballarat newspapers have been digitized for the period 1869-1875, and there was no directory published in the intervening years, it is not possible to assign an exact date for the opening of Willet’s Bridge Street studio but an early to mid 1870s date would be highly feasible.

The image records a man and woman with six children – three boys and three girls. The presence of a family connection between the group members is clearly suggested through their affectionate poses – older siblings rest their arms protectively on the shoulders of younger children who also lean affectionately against their parents. The overall impression created by this portrait is that of a respectable and hard working migrant family (possibly Germanic) keen to record their dynastic success in the land of opportunity. With the exception of the dresses of the two younger daughters, the family’s clothes seem to be well worn.

The mother’s dress, in particular, appears to have been remodelled from a late 1860s style with the addition of more up-to-date ‘mousquetaire’ cuffs to the sleeves and ‘en tablier’ trimmings to the skirt. She has also combined a heavily plaited hairpiece with her own hair which is dressed high on her head and secured with a pierced tortoiseshell comb. The two younger girls appear to be the centre of attention, dressed in matching white frocks of ‘broderie anglaise’ (cut work embroidery), and this image may in fact record their first communion. A sense of occasion is conveyed by the carefully curled coiffures of all three boys, the younger two of which are yet to be ‘breeched’, ie. dressed in trousers; before the era of indoor plumbing, it was common practice to dress both girls and boys in skirts (to avoid messy toileting accidents) until the age of about five or six.

The celebratory air of the image is further heightened by touches of hand-colouring in the girls’ posies and the floral buttonholes of the eldest son and his father.

* Margot Riley is based at the State Library of NSW and is a historian with a special interest in textiles and dress. She is the curator of Australian Glamour – which sits alongside the amazing Selling Dreams exhibition at The State Library of NSW that charts the fascinating evolution of fashion photography though 60 original works by 40 legendary artists including Horst P Horst, Irvig Penn, Richard Avedon, Helmut Newton, Arthur Elgort and Tim Walker. Selling Dreams is drawn from the Victoria and Albert Museum‘s national photographic collection, and is curated by V&A curator of fashion photography, Susanna Brown.

This free exhibition is at the State Library of NSW until November 10.

Have you hit a research roadblock? Got a query about a historical record? Our experts are here to help. Email your queries to experts [at] insidehistory.com.au or write to us – click here for contact details.