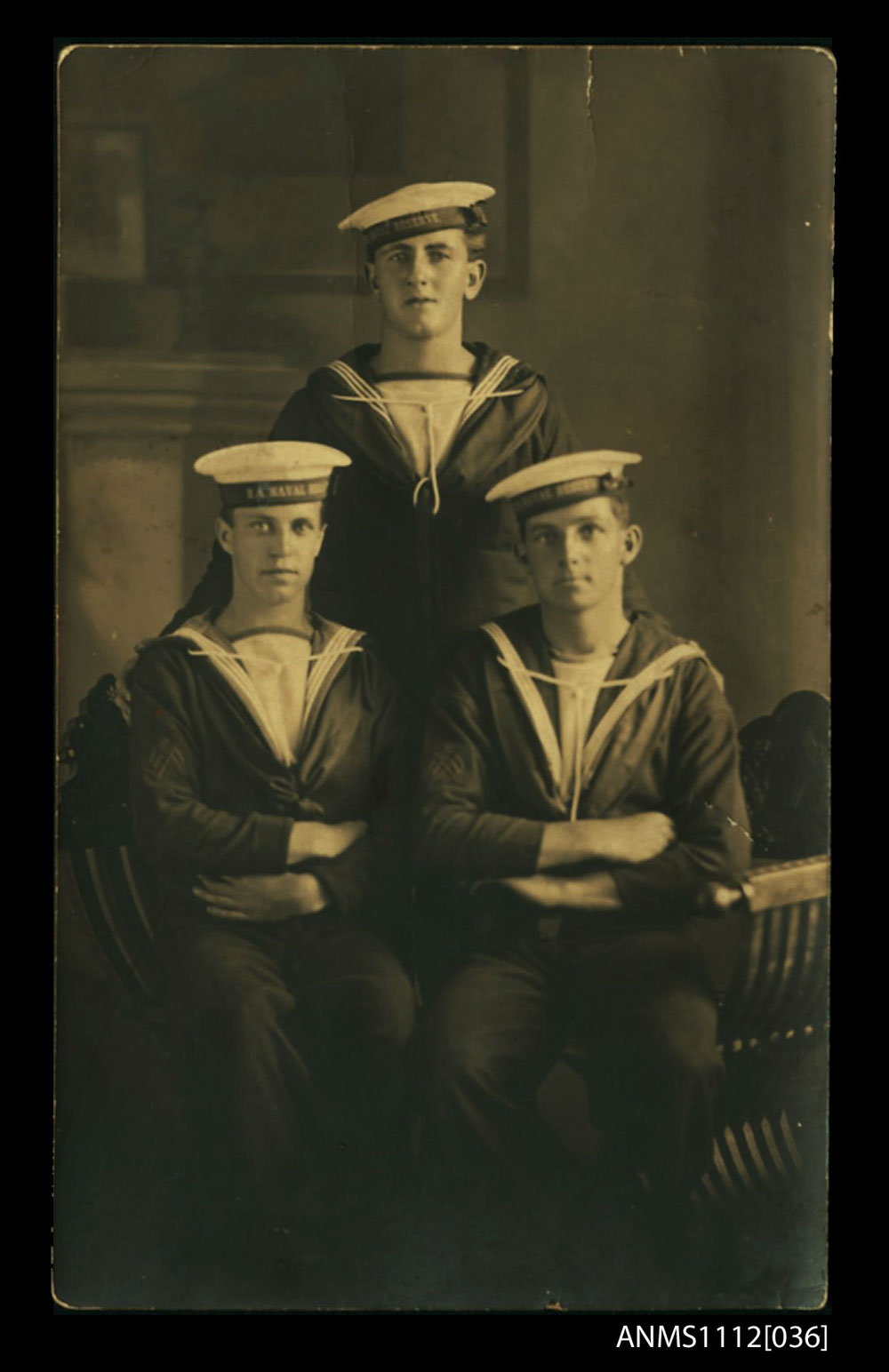 Second in our series from Lindsey Shaw, formerly a Senior Curator at the Australian National Maritime Museum, on the history of the Royal Australian Navy.

In August 1914 Australia declared its support of Great Britain and the country went to war. Whilst recruiting began in earnest for troops and lighthorsemen, the Royal Australian Navy (RAN) was quick off the mark – sailing north with the Australian Naval & Military Expeditionary Force (AN&MEF) to take German New Guinea, and to stop the German Pacific Fleet. The first Australian casualty of the war was a sailor – Able Seaman William Williams, fatally wounded on 11 September 1914.

The first naval vessel lost was the submarine AE1 – see image above – which went out on patrol off New Britain on 14 September 1914 but did not return. Her final resting place has never been located and so the exact cause of her loss remains unknown.

Frederick William Woodland was a Royal Navy sailor who joined the RAN in February 1913 and was deployed to the submarine. His service record, held at the National Archives of Australia, simply states ‘Reported missing in Submarine AEI’. His widow Helen, 4-year old son Frederick and 1-year old daughter Annie were left with compensation in the form of a pension, medals and the gratitude of King and country. In 1921 Helen migrated to Quebec, Canada. Until they reached 16 years of age the children received an allowance to assist with their schooling; and Helen’s widow’s pension ceased in 1927 when she remarried. This information comes from the family archives – all the paperwork relating to Woodland’s death was kept by Helen and then her daughter Annie. In 2001 Annie’s son was visiting Australia and, moved by the Australian National Maritime Museum’s display about AE1, talked to his mother about donating the Woodland family papers. This wonderful archive brought the disastrous loss of AE1 into focus with a real sailor and his family, not just a page in history.

Australia’s navy served across the globe in this ‘war to end all wars’. From the Pacific to the Atlantic, the North Sea to the Mediterranean, the RAN patrolled, escorted, fought and bombarded as part of the British Grand Fleet. HMAS Sydney soundly defeated the German raider SMS Emden in a fierce battle off the Cocos Islands in November 1914 and AE2 was the first Allied submarine to successfully penetrate the Dardanelles Straits, disrupting Turkish and German shipping.

The Royal Australian Naval Bridging Train (RANBT) was the first in and the last out of Gallipoli – building pontoons, bridges and jetties for the landings and evacuations of the troops. Douglas Ballantyne Fraser joined this small naval engineering unit and served with the RANBT at Suvla Bay on the Gallipoli Peninsula, before moving to duties along the Suez Canal and the Sinai Peninsula. After the RANBT was disbanded at the beginning of 1917, Fraser returned to Australia in July 1917 and served in the Royal Australian Naval Brigade (RANB) for the remainder of the war. The RANBT is an all but forgotten naval engineering unit but it was the most decorated unit in the Royal Australian Navy during the war. From their commander, LCDR Leighton Seymour Bracegirdle, who was awarded the Distinguished Service Order and through the ranks, the men of the RANBT were decorated more than twenty times for their service at Suvla Bay, the Suez Canal and in the Sinai during 1915-1917. Fraser’s daughter – a museum volunteer – donated his memorabilia in 2007 thus giving us a personal insight into this relatively unknown unit of the Royal Australian Navy.

At the end of the war the Royal Australian Navy had lost 15 officers and 156 sailors, including the entire complement of the submarine AE1. Lest We Forget.