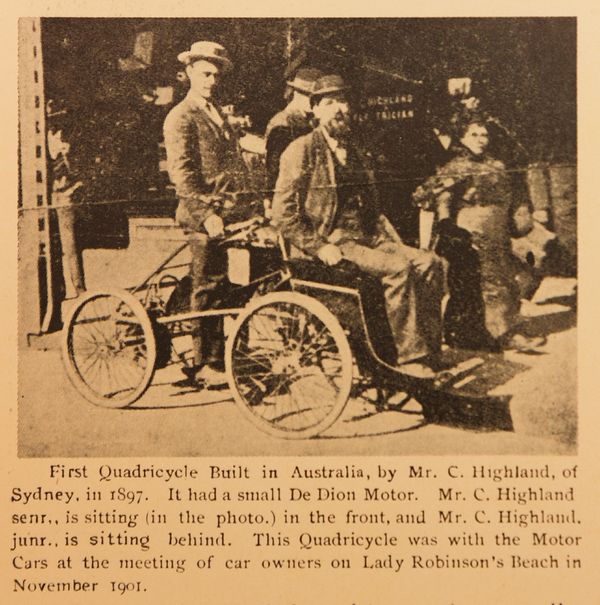 Long before the Holden vs. Ford rivalry, before Custance broke inter-city motoring records, and even before carriages gave way to cars, an unsung inventor tinkering away in his Sydney workshop quietly made Australian motoring history.

Charles John Hoglund – who would later anglicise his surname to ‘Highland’ – was born in Stockholm in 1849. By his thirties, he captained trading ships in the Solomon Islands while avidly pursuing books and periodicals on the latest technological advances. When he and his wife settled in Sydney, Charles founded a business on Market Street where he set about importing engines. Along with his son, Charles Jnr, he experimented with electrical products from pulley systems to armature winding. Charles’ first major innovation is recounted in an article from Tooth’s KB Chronicle, 1 December 1935: “In 1894 Charles Highland dreamed of the Horseless Carriage, and in 1894 he realised his dream.”

The ‘horseless carriage’ that he developed is believed to have been Australia’s first, a three-wheeler chain driven by a Daimler engine. A rigorous series of test drives around Johnston Street in Annandale revealed that the vehicle was prone to spilling petrol and catching on fire – not exactly roadworthy.

Later that year, Charles fitted the cumbersome engine to a boat instead, thereby creating the first boat in Australia to run on an internal combustion engine.

In 1896, Charles Snr and Jnr set about constructing a four-wheeler to improve mobility, using an air-cooled 3 h.p. De Dion engine and various technological innovations, such as a new carburettor. They enlisted the help of another innovative father-son team – George Winter Wood, known as ‘The Cycle Maker’ of Leichhardt, and his son George Wood Jnr – while the coach work was completed by Pitman of Redfern.

In March 1897, the final product took to the roads. The vehicle, sometimes referred to as a ‘quadricycle’, was a notable success, facing few mechanical troubles.

The anonymous Tooth’s KB Chronicle journalist recounted what it was like to ride in this early car:

“Starting was quite a feat. They always picked a good decline, and this sometimes required a fairly long push. The driver jammed on the brakes hard, and the passenger parked in the front seat and held tight. The driver then lifted the exhaust valve, released the brakes, and pedalled all out down the gradient; a fair speed was attained – then bang-bang-bang! She’s off.”

But was this Australia’s first motorcar? There is a surprisingly wide range of contenders for the title.

David Shearer of Mannum, South Australia, was hailed as “Australia’s first inventor of a motor car” in the early 1890s. As The Mail reported on 10 July 1926, his was powered by mallee wood. The Powerhouse Museum notes that Captain Harry Tarrant of Melbourne is regarded as the inventor of Australia’s first petrol car in 1897.

“Who made in Australia the first motor cycle, the first motor and forecar, and the first tri-car? The honour of making and introducing the three types belongs to Messrs.  G.W. and G. Wood, who lived in Leichhardt at the time. According to accounts, these mechanics took the initiative in motor matters as early as 1895…”

That there were so many contenders for this achievement speaks to the exciting, experimental spirit of this early period of Australian motoring history. Multiple competing claims, gaps in the material evidence and the sometimes minute technical variations between vehicles make it difficult to evaluate which exactly was Australia’s first. Then there’s the surprising trickiness of determining what exactly constitutes a car – is it four wheels? The engine? Running on petrol? All of the above?

At any rate, Highland is credited as the owner of Australia’s first four-wheeled motor vehicle, yet his technological innovations remain sorely little-known.

Other innovations he accomplished include Australia’s first petrol driven lawn mower, first electric cutting and welding machines, and the first home electric light plant to be developed in one unit. The Tooth’s KB Chronicle states that Charles Highland was on the threshold of further discoveries when, “owing to coming into contact with various electric rays, he became seriously ill”.

Tragically, Charles became bankrupt and, according to his descendant Robin Amos, was committed to the Callan Park institute by 1905. He died in 1908.

“I think it is a real shame that someone who was so inventive seems to have been lost to history,” Robin says.

“In lieu of floating companies and capitalising on his products and achievements, he preferred to attain the labour of ‘doing something’ and creating the means whereby man would have a brighter and better life in his domestic domain.”

Learn more about Australia’s transport history in issue 18, the transport edition of Inside History.