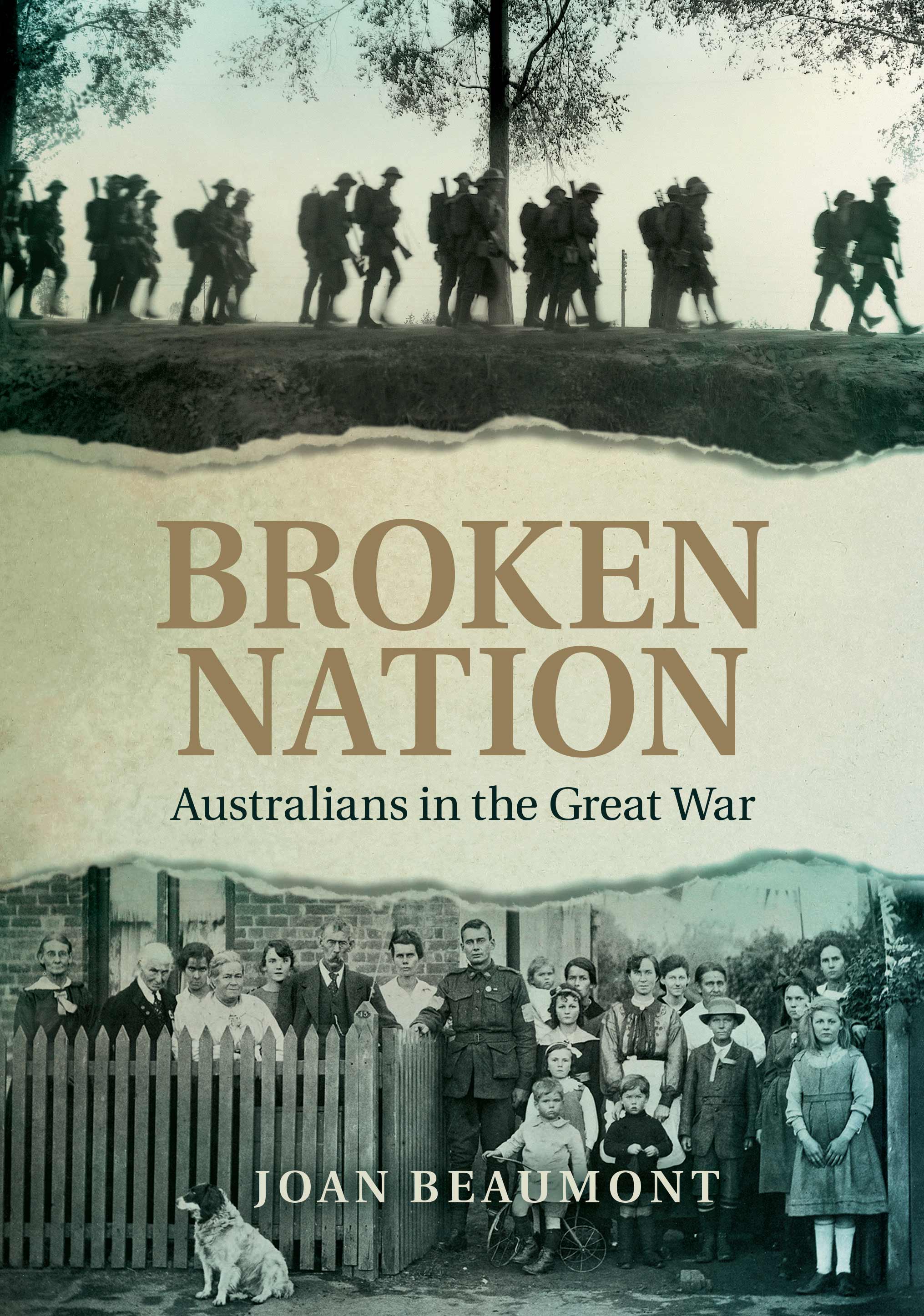 Home > Blog > Featured > Who and what do we remember each November?

Who and what do we remember each November? Joan Beaumont, author of Broken Nation: Australians in the Great War, looks at the context of Remembrance Day.

As a child I heard the story of my great uncle Joe Russell many times. Family mythology would have it that he volunteered rather late in World War I. He was single and 31 years of age — very much an ‘eligible’ — but it was only in December 1916, after he had been handed a white feather, for cowardice, by his girlfriend that he finally went to war. Joining the Australian forces at Polygon in September 1917 he was almost immediately wounded. His leg was amputated and he returned to Australia in early 1918. Resettling in Adelaide he lived with his sisters, including my grandmother who had been widowed by the Spanish influenza that killed perhaps 50 million people around the world in 1918–19, almost 10 times the number who died in the war.

Joe would regularly have nightmares, reliving the suffocating moments when he was smothered by the dirt of France as stretcher bearers carried him out from the battle front. He would struggle in his sleep to get out of bed, without his wooden leg, and fall to his bedroom floor. Edna, my mother and the only child in the household, would rush to help him. Joe’s contribution to World War I was reluctant, short, ineffectual, yet brave. Being one of millions who served in this terrible conflict, he has been forgotten by everyone but his family.

What we remember, as individuals and groups, is always partial. For Australians, as a nation, the memory of war is dominated by Gallipoli. But there is much more to Australia’s experience of war in 1914–18 than this. Many more Australians died on the Western Front; others in Palestine. And, we often forget, most Australians did not serve at all. Although nearly 330,000 men from a population of fewer than five million did go overseas with the Australia defence forces, nearly 70 per cent of men aged 18 to 60 did not.

The Australian home front is a core element in the story of war. At home Australians were physically remote from battle, but they were profoundly affected emotionally. And they were critical to the war effort in different ways. For one thing, they accepted casualties on a scale that would be unthinkable today. They mobilised vast resources through voluntary work and, in many cases, accepted a lower standard of living. Most critically, the majority of Australians supported the war, believing that the cause for which their men were fighting was just.

Some domestic populations of World War I ultimately lost the will to fight — Russia in 1917 and, to some degree, Germany in late 1918. But despite the fact that Australians were profoundly divided on the questions of military conscription and the equity of the sacrifices demanded of them, the will to continue the war survived. The home front should also be remembered because it was here that much of the intangible damage of World War I occurred. Of course it was the men of the AIF — the more than 60,000 dead and 153,000 wounded — who bore the physical injuries of the war. But their families and the Australian political system and social fabric were also left injured and maimed.

By 1916 Australians were in many ways a ‘broken nation’, bitterly divided on the questions of how the military and economic cost of the war should be borne. The resulting disputes — over conscription, cost of living increases and the obligations of citizenship — left Australia divided along fault lines that lasted at least a generation: the volunteer against the ‘shirker’; the conscriptionist against the anti-conscriptionist; and — though sectarianism was not created by the war — the Catholic against the Protestant. The insults, calumny and accusations that each had traded with the other in the hysteria of the war years poisoned public life for many years. The fact that the Australian Labor Party split under the pressures of war also ushered in a long period of dominance of federal politics by the conservative parties. In much of the recent commemoration of war, this negative legacy of the war has been elided.

Remembering the home front does not deny the importance of battles in the history of World War I. These after all are the essence of war. Yet even here, we remember only part of the story. When the five divisions of the First Australian Imperial Force came to choose the locations for their memorials in 1919–20, they chose Pozières (1st Division), Mont St Quentin (2nd Division), Sailly-le-Sec (3rd Division), Bellinglise (4th Division) and Polygon Wood (5th Division). These battles do not map easily onto today’s commemorative practices and priorities.

Fromelles, notably, is absent. And who knows where to find Bellinglise? The men who fought World War I, it seems, chose to be remembered not for their defeats but for their victories. Gallipoli perhaps was the exception, although even this was remembered as a ‘triumph’ in the sense that it was the dramatic storming of the cliffs by the initial landing forces on 25 April 1915 and their survival against the odds that sparked the Anzac legend. Today, however, war remembrance is dominated by catastrophe and trauma. In many accounts of the war, combatants have become almost non-consenting victims, and mutineers and rebels, heroes’.

Yet if we owe anything to the generation that fought and died in World War I — and Remembrance Day ceremonies generally suggest that we do — it is to try to remember the war as they saw it. In particular we must recognise, if not condone, the values for which Australians were prepared to fight. In popular culture World War I is often seen as an epitome of futility: a war in which the losses were never matched by the gains; in which lives were wasted by incompetent and profligate military commanders; and in which victory failed to bring any lasting peace to Europe. There is good reason for this, but Australians did have clear war aims in World War I. They went to war to maintain British global imperial power, to protect the racially exclusive White Australia Policy, to guarantee Australian security in the Pacific, to defend democracy against German tyranny and aggression, and to protect the rights of small nations such as Belgium. Some of these values we understand, but some we struggle to understand. Were these war aims worth 60,000 lives? But that is not the issue.

What matters is that for Australians of a generation a century ago, these values were enough to sustain them through four terrible years of war.