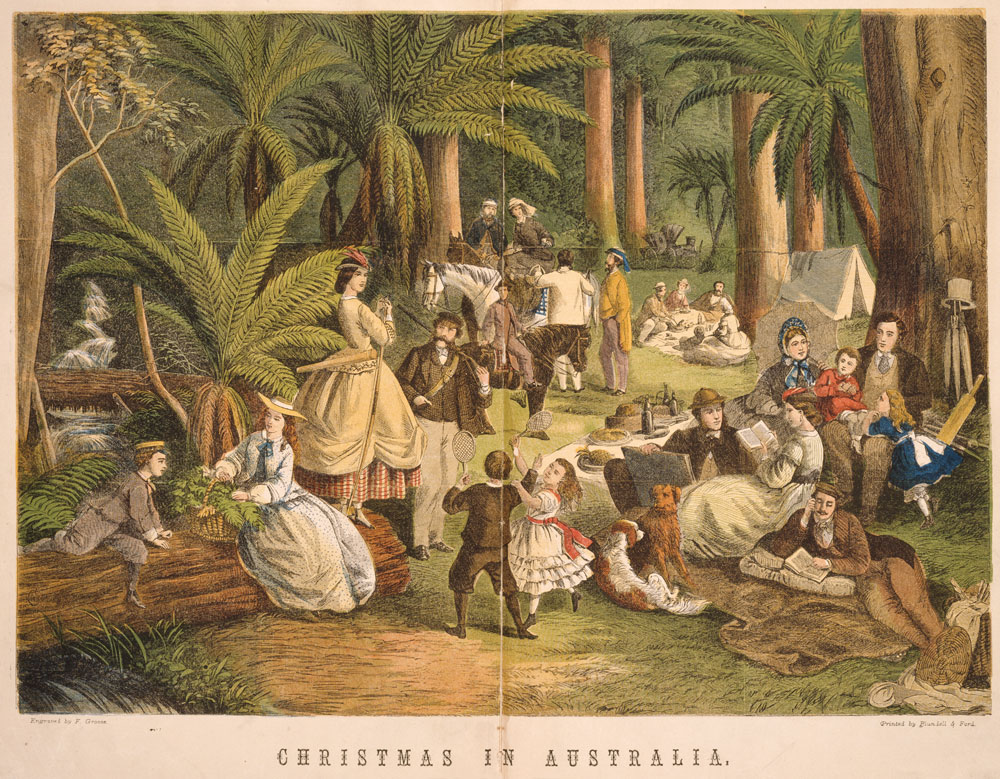 As families gather and spread good cheer, this time of year offers the ideal opportunity to reflect on our ancestors’ holiday customs. Sarah Trevor delves into Trove to discover snapshots from festive seasons of years past across several communities.

From Holly to Gum Nuts
Many 19th-century traditions remain prevalent today. Queen Victoria reportedly popularised the Christmas tree — initially a German tradition — among her English subjects, while the modern Christmas card originated in England in the 1840s and soon spread here. Gradually, Britain’s wintry customs were acclimatised to our summery season. Holly’s place in Christmas decorations was replaced with cherries and mistletoe with roses.

Adelaide’s celebrations of 1880 were particularly grand: Rundle Street blossomed in decorations, from Chinese lanterns to gum branches. In 1836 the Sydney Gazette condemned the increasing ritual of “intemperance”. Before dawn on Christmas Day, the colony’s youngsters reportedly wandered around, calling into homes to bid Merry Christmas. In return, they were granted pence, bread and ale.

Celebrations were also marked with balls and bustling markets. Some aspects of the season have changed little — in 1902, the necessity of having to “tackle the Christmas shopping crowds” seemed to have been as dreaded then as it is now!

Offering Peace
Spreading Christmas cheer was not the only motivation behind the annual ‘Native Conference’ events initiated during Governor Macquarie’s administration. Held in the market square at Parramatta, the first Conference in 1814 was attended by 60 Indigenous men, women and children from the Sydney region, who sat in a circle along with the Governor and his wife, enjoying roast beef and ale. By 1818, several hundred Indigenous people were in attended the event.

The 1824 Conference was attended by the tribal chief, Windradyne, who had led the Wiradjuri people’s resistance against colonial settlers in Bathurst. He walked some 200km to Parramatta to request peace from Governor Brisbane, which was duly granted.

Kalgoorlie, in Western Australia, held its first annual ‘Blackfellows’ Christmas Feast’ in 1891, and maintained the event for decades. In the Western Argus on 27 December 1921, E M Collick appealed for food and donations, noting, “We don’t do much for our black neighbours as a whole, so let us at least be generous to them on their Feast Day”.

The Tree of Life
With a long history of immigration to Australia and New Zealand, the Chinese community’s customs have added diversity to our holiday calendar. Predominantly Buddhist and Taoist, Australia’s early Chinese settlers appeared to have viewed Christmas primarily as an opportunity to have a grand feast (at least according to Australian newspapers). As early as 1856, The Argus reported that Chinese immigrants in Geelong, Victoria, had purchased pigs and poultry in preparation for a “grand gorge”, speculating that since it was near Christmastime, “it may be the preliminary to a laudable adoption of the good old English customs”.

By the mid 20th century, many Chinese families also commemorated Christmas by decorating their ‘Tree of Life’ with paper flowers and chains. Of course, the most important holiday on the Chinese calendar has been Chinese New Year for thousands of years. It has a long history here too, with fireworks marking the occasion in towns and cities across Australia from at least the 1880s.

Breaking Bread
The Greek community in Australia is well known for proudly maintaining its ethnic traditions and contributing to broader Australian society, and its holiday celebrations are no different. During the Great Depression, a Greek migrant by the name of Gregory Casimaty gave a wonderful demonstration of Christmas spirit, hosting a dinner for 200 unemployed single men who otherwise may have had quite a lonely Christmas. Casimaty, who was known for his philanthropy in his town of Hobart, had arrived in Sydney from Greece in 1905, just 15 years old.

In 1938 The Advertiser described a Christmas performance at Adelaide’s Holy Trinity Church Hall as a “mixture of Greek and Australian custom.” Students of the city’s Greek school performed folk dances, songs and poems.

Generations of religious Greeks have fasted from meat, fish and dairy in the lead-up to Christmas Day. At the long-awaited feast on Christmas Day, special bread called christopsomo is served along with other Christmas dishes and is still enjoyed today.

Food, Glorious (Italian) Food
“It seems as if we have caught to some extent the spirit of the old Italian carnivals in our Christmas and New Year Eve celebrations,” declared The Brisbane Courier in 1903 when describing Brisbane’s festive spirit. Certainly the Christmastime pantomime shows attended throughout Australia in the early 20th century were believed to have Italian origins.

Italians expected to attend a traditional midnight mass on Christmas Eve — even when at sea! The Savinas, a Cairns couple of Italian descent who were aboard the Surriento when returning from a trip to Italy, described the ship’s sumptuous Christmas celebrations to the Cairns Post, 11 January 1951. Typically Italian, so much food was served that only about half was eaten by the passengers.

Many Italian migrants helped build our post-war infrastructure projects, and the work could be lonely. Those working on the South Australian railways in 1953 were kindly sent a Christmas parcel containing nuts, cigarettes, Italian newspapers and a personal greeting, with the help of railway officials.

Traditions Young and Old
As written in Queensland’s Nambour Chronicle and North Coast Advertiser, on 15 December 1950, “here in our own country we took our Christmas custom from everywhere, blending into open traditional design that we all warm to — the typical Australian Christmas.”