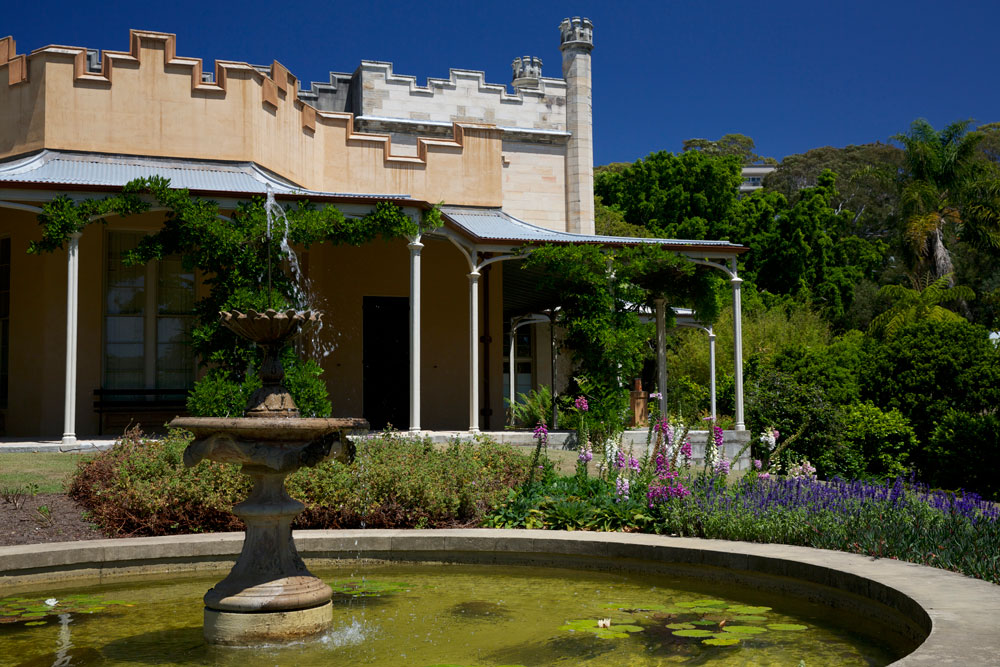 Visiting and wandering through a historic home can prove to be a fascinating and richly rewarding experience even for those with only a passing interest in history. Adam Woodhams tours two historic houses and their gardens for a wonderful glimpse into their past.

A well preserved and presented property provides a captivating window into a period of a time long gone. It allows a fleeting glimpse into not just the bigger picture of that society, but at the minutiae of daily life 50, 100, 200 years past. A fact often not considered by the visitors to heritage properties is that the properties are effectively, as a whole, static. Although their structures may undergo remedial work or are tweaked to become true to a period, the challenges are generally to do with preservation, site care and management rather than expansion, growth, rejuvenation, and replacement. In many cases what surrounds these historic properties and helps them to truly maintain their ‘sense of place’ are gardens and landscapes; living, breathing heritage that is hugely important in fully reconstructing the narrative of a property. We visited two of the finest heritage properties in Sydney managed by Sydney Living Museums, to delve into the fascinating history of their gardens and the challenges of modern management of these living treasures.

Elizabeth Farm, Rose Hill
It’s an oft spoken truism that Australia started its great economic rise ‘on the sheep’s back’. If this rise is to be attributed to one man it would be John Macarthur and it all started as early as 1794 at the Macarthur family property ‘Elizabeth Farm’ at Rose Hill near Parramatta. John and Elizabeth Macarthur, along with their infant son Edward, had arrived in the young Sydney colony in 1790 after surviving the sea journey as part of the horrendous Second Fleet. It was in February 1793 that Macarthur received the first land grant of 100 acres (40ha) of ‘some of the best ground that has been discovered’ beside the all-important Parramatta river. Construction of a homestead on the land quickly began and by November the same year the Macarthur family, which by this time included three young children, moved into the house they named Elizabeth Farm. Eventually the farm would grow to cover almost 1,000 acres (404ha) and was a fine agricultural estate. Today it covers around one acre (.4ha) in suburban Rose Hill.

In order to understand the Elizabeth Farm gardens today it is worth learning as much as we can of the original design. A lot of our visual knowledge of the gardens and the estate comes to us from the paintings of famed colonial artist Conrad Martens. Although Elizabeth Macarthur’s granddaughter was a keen sketcher, her sketch books that reference the garden only contain drawings of flowers and plants, none of garden layout, so there is some thought that a book of such sketches may have been lost over time.

The house sits on a rise over Clay Cliff Creek, from which there was once sweeping views towards the Parramatta River. The aspect from the northern veranda over cultivated paddocks would have been purposefully framed by bunya (Araucaria bidwillii) and hoop pines (Araucaria cunninghamii) to highlight the panorama and to frame the house when seen from afar. Today these sweeping vistas are all but gone, swallowed by suburbia and the growth of the surrounding trees.

The first garden beds were most likely based on a simple geometric plan, as seen at Old Government House Parramatta, Government House Sydney and which survive at Rouse Hill farm. The beds would have contained an assortment of shrubs and quite likely useful plants for the house, flowers for cutting and herbs for the kitchen. The use of geometric beds was quite typical in ‘frontier’ colonies such as those in Australia and the United States, the idea being that the formality of geometry enabled the settlers to express control and dominance over a wild and rugged landscape. Gardeners today would be struck by the diversity of plants in these colonial gardens. The Macarthurs in particular had a great love of botanic diversity so their garden was an eclectic melange of everything from traditional perennials and roses, to succulents, bananas and grapes. Although beautiful these were by no means grand gardens. They were small, private and almost intimate, in many respects a reflection of the character of the Macarthurs themselves — Elizabeth Farm was never used as a venue for formal entertaining on any large scale. It was always, first and foremost, the family home.

The home’s vegetable gardens and orchard were located some distance away from the house itself and, as Sydney Living Museums portfolio curator Scott Hill remarked, quite ironically, their location is thought to be beneath where a Woolworths supermarket stands today. It’s worth noting too that when one reads any of the journals of the Macarthurs and a mention is found of ‘doing gardening’ they are not referring to popping out the front to mow the lawn, clip the hedges and pull out a couple of weeds as we would today. ‘Doing gardening’ during this period was used in relation to working in the vegetable and fruit gardens.

The gardens today
The aim is to bring the gardens of Elizabeth Farm as close as is possible to those of a late Regency garden. Surviving elements are being retained and in some cases uncovered, while the rest is being pieced together through the ongoing interpretation of paintings, drawings and written records. Determining what plants were grown is easier than may be expected as William, one of the younger Macarthur sons, ran a commercial nursery and maintained an extensive botanical collection at the family’s other property, Camden Park. Nursery lists from this enterprise still exist and make for interesting reading as they demonstrate the rich diversity of plants available — 16 different types of passionfruit, for example!

A number of significant plants still exist in the gardens, such as an olive tree (Olea europaea) quite likely planted by Macarthur in 1805, a now somewhat recumbent Chinese elm (Ulmus parvifolia) thought to have been planted in 1850, and a huge clump of non-invasive giant bamboo (Bambusa species). At a more personal level many of Elizabeth Macarthur’s favourite plants are to be found in the garden too; plants such as heliotropes (Heliotropium arborescens) and China pink roses (Rosa chinensis cvrs) have pride of place.

Vaucluse House and Estate, Vaucluse
As is often the way with early colonial properties Vaucluse House and its more extensive estate was an evolution rather than a one-stage development. Although the first land grant in the area was as early as 1793 it’s generally considered that ground wasn’t broken for Vaucluse Estate until 1803 by the colourful ex-convict Sir Henry Browne Hayes. Sir Henry had a number of structures built on the estate, including two houses. Part of one of these houses still exists inside Vaucluse House. The Gothic revival style buildings that we recognise as Vaucluse House were built by the later, more well-known owner, lawyer and politician William Charles Wentworth, who purchased the estate in 1827. It was Sir Henry who had started to develop the estates landscapes in the picturesque style, but it was during the time of the Wentworths that the grand gardens were all but completed. The quality and diversity of the gardens was certainly aided by the fact that the family were very keen horticulturists; Charles’ wife, Sarah Wentworth, even purchased miniature garden tools for their young children. At its peak the grounds of the estate extended to 515 acres (206 ha), today it still covers an astounding 25 acres (10ha) right in the middle of some of the most expensive real estate in Sydney.

In contrast to the almost rugged, bucolic nature of Elizabeth Farm, the gardens and greater estate of Vaucluse House were a very different style. Situated in a sheltered valley with a reliable water supply, the grounds surrounding the house were laid out as ‘pleasure gardens’ to allow for family picnicking and promenading. Outside the confines of these pleasure gardens many of the grounds in the valley were maintained in a park-like state to the water’s edge. The original pleasure gardens commenced with a rolling lawn leading down from the house towards the harbour and contained a mind-boggling collection of exotic plants. Much remains of these gardens. The vegetable gardens were located across the small, natural watercourse just to the west of the house, and these gardens are still operating today. From early in the 20th century the house and grounds became a public park and in 1912 the house was opened as Australia’s first historical museum. Although the gardens survived amazingly intact, it was from this period onwards that some rather unfortunate plantings took place impacting on the integrity of the original landscape vision of the Wentworths.