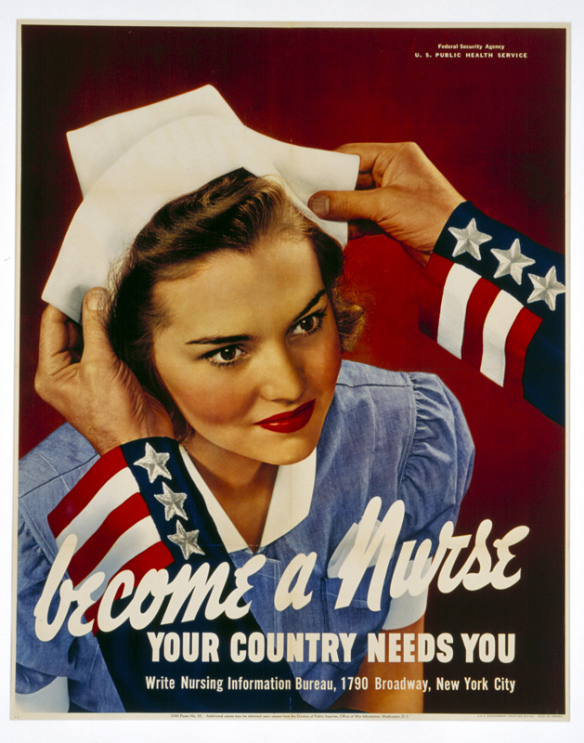 For a long time the identity of the young woman depicted in this famous American World War Two propaganda poster was a mystery. Staggeringly, just two months ago, the woman on the poster came forward. Weslee Wootton D’Audney visited the Australian National Maritime Museum‘s recent exhibition, Persuasion: US propaganda posters from WWII and revealed her past and link to one of the posters in the exhibition.

It’s discoveries like this at our marvellous museums that keep us going back to exhibitions everywhere. Here, she shares a snippet of her story.

I have never been famous, though my face adorns a famous poster that blanketed America during World War Two – and even now pops up almost weekly in a new form. I’m probably the only person alive who remembers its creation.

Following the attack on Pearl Harbor on 7 December 1941, President Franklin Roosevelt and his cabinet foresaw a long war with heavy casualties, and made the recruitment and training of new nurses a high priority. In July 1942, I was 17 years old and a first-year pre-med student at Barnard College, Columbia University, in New York City. I earned my college expenses doing back-to-school fashion shows for Fifth Avenue stores and posing for story illustrations in Saturday Evening Post and for various magazine advertisements. I was in demand as the ‘wholesome outdoor type’ and was called the ‘clean face of young America’.

William Ritter, a well-known commercial photographer for whom I had worked previously, called me for an appointment. When I arrived at his studio I was asked to put on a student nurse’s uniform. An older man was given two navy-blue sleeves with white stars and red-and-white stripes to slip on. They had obviously been specially made for this shoot.

Mr Ritter usually tried several compositions and took lots of pictures. This day he had a large pencil-drawn layout showing star-spangled sleeves with hands reaching out to cap a nurse, whose face was blank. The layout was the work of the J Walter Thompson advertising agency and had been approved in Washington. Mr Ritter told me he had to follow the layout exactly, adding, ‘This one is important, it is big’. The result was the recruiting poster Become a Nurse, Your Country Needs You. Within a few months, it was appearing in post offices, libraries, public buildings, doctors’ offices, high schools and universities. More than a million copies of the poster were distributed throughout the United States. I passed it every day in the halls at Barnard, where it was also in the cafeteria and the dormitories. At the end of the semester I asked the dean if I might have one. She responded, ‘Take two,’ and I carried the posters home on the subway that night…

Why does the poster still appeal after 72 years? A New Zealand friend, who is a psychotherapist and has lived in the United States, offered this explanation: ‘Where else would you get a symbol of innocence, purity and patriotism all rolled into one? In World War II, America was the saviour of mankind, loved by everyone. There is a great need for Americans to feel good and patriotic about themselves at this particular time in their history.’ While the ‘clean face of young America’ has become an old woman wrinkled with age, it is heartwarming to me to find the poster has not only endured but is being rediscovered by a new generation.”