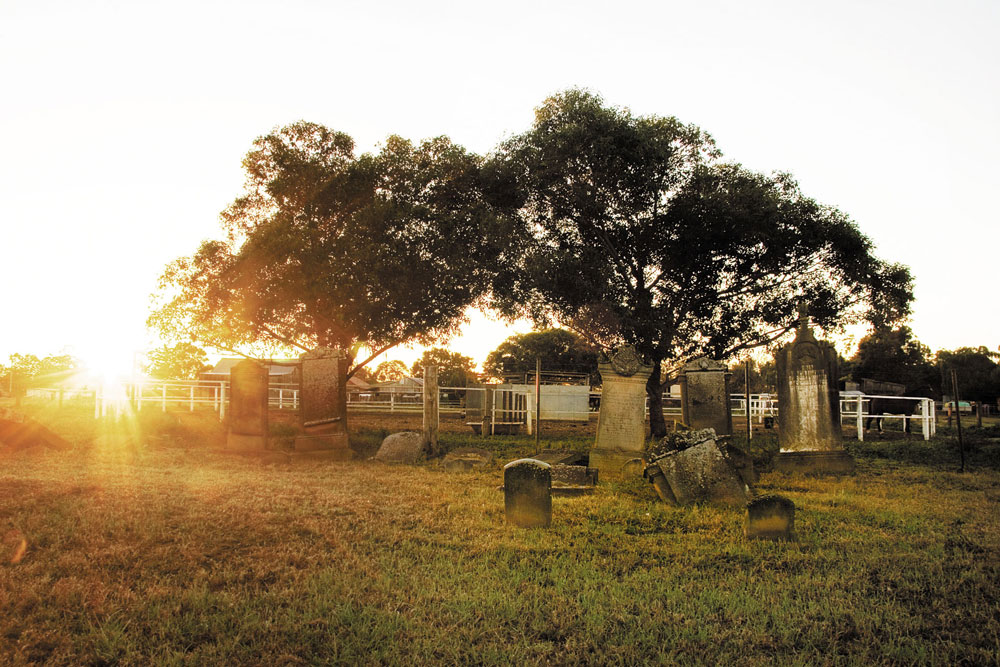 In great news for the heritage of the Hunter region, Maitland Jewish Cemetery has recently been granted State Heritage listing! As we celebrate the good news, we revisit what historian and University of New England professor Janis Wilton had to say about the great work being done to protect the at-risk cemetery.

In 1979 Rabbi Raymond Apple described Maitland Jewish Cemetery as a “monument to dreams and deeds”. Like other cemeteries, these dreams and deeds are embedded in the gravestone inscriptions, the stories that emerge about the people buried in the cemetery and the history of the site and the locality in which it sits.

Maitland Jewish Cemetery is a particularly powerful place. It is unique as the only separate and consecrated Jewish cemetery in northern NSW. Established in the late 1840s it served members of the Jewish communities throughout the north and north west until the 1930s. It is marked by Hebrew on the gravestones, by Jewish symbols, by the simplicity of the tombstones, by the patina left by neglect and care. It is a tangible reminder — along with the still extant synagogue building — that the area was home to a significant Jewish community in the 19th century.

When Joe Eisenberg, director of Maitland Regional Art Gallery, and I first visited the cemetery in 2006, we were mesmerised. We felt, we imagined, we puzzled. Joe encountered a strong sense of his own Jewish heritage. We wanted to have the cemetery and its stories become better known. We wanted it to be conserved, treasured, interpreted. We sought what work had already been done.

Over the years, a number of people and groups had transcribed the English inscriptions. There were initial profiles on some of the people buried there. There were photographic and archival records. We wanted to do more. We wanted the dreams and deeds of the people buried in the cemetery, their families and their community to come alive. We wanted local residents and visitors to gain a glimpse of the complexity and challenges of Jewish life in colonial Maitland and to experience the emotional and evocative pull of the site.

Joe commissioned artist Hanna Kay to paint her responses to the cemetery. She visited, she reflected, she became absorbed in the physicality of the place. The aim was to engage people with the cemetery through the paintings. Hanna’s exhibition has since travelled to nine galleries in New South Wales, Victoria and Queensland. Art, history, place, emotions, movement, beauty settle in her works.

Joe asked me to research the history of the site and the people buried there. Descendants, local residents and historical groups, and Jewish community organisations all assisted with their archives, collections and memories. Deceased estate files, probate records, newspaper articles, photographs provided hints, insights, images. The Hebrew inscriptions on the gravestones were transcribed, transliterated, translated, explained. Jewish burial practices and symbolism were identified. The lives of individuals and families took shape. Patterns emerged. A book was published. And there is an online database designed to share the ongoing research on the people in the cemetery, the Jewish community and other sites.

The project has attracted positive responses from visitors, Jewish community members, residents, descendants, family and local historians, and from the heritage industry. The project won the 2011 National Trust (NSW) Heritage Award for Interpretation and Presentation (Government).

In Joe’s and my terms, the project achieved its aim to engage wide and diverse audiences with the ideas and reality of the cemetery, with the lives of the people buried there and the community they represented, and with the importance of conserving and interpreting such a site. Awareness of the significance of the cemetery and the ways in which it can be read and presented have increased. Now the next steps are underway: Maitland City Council has initiated a conservation management plan for the cemetery, and has participated in establishing a Friends of Maitland Jewish Cemetery group.

The mixture of research, interpretation, presentation and conservation evident in the project — and developments since — perhaps provides a way forward for other cemeteries in need of documentation, care and communication.