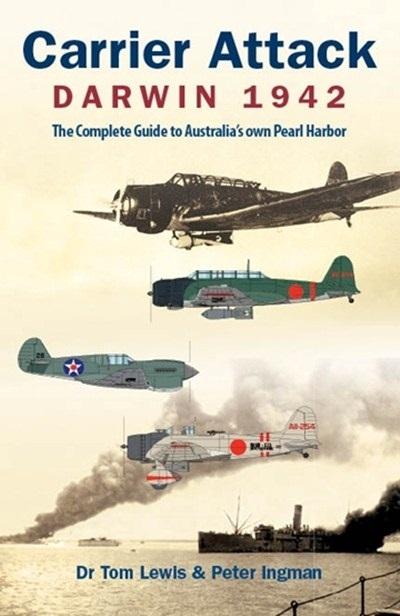 No one could have predicted the extraordinary scale and ferocity of the attack on Darwin on February 19, 1942. This would be the largest ever Japanese air attack in the South Pacific, and the only time Australia was attacked by carrier-launched aircraft.

Using newly translated Japanese records, Carrier Attack is the first forensic analysis of the Darwin air-raid. It is the first detailed analysis of the raid by military historians. Carrier Attack reveals the reality of the raid – and dispels many myths. The Darwin raid is usually portrayed as a wholesale disaster for the Allies, and a day full of military ineptitude. Carrier Attack shows the defenders were alert and fought with purpose. Arguably it was the Japanese that wasted much of their attacking strength.

After several weeks of intense warfare in the Pacific, it was the lonely outpost of Darwin that received the attention of the mighty Pearl Harbor attackers but as no invasion followed, what was the reason for this? Was Darwin really of such vital strategic importance? Carrier Attack answers these questions, and provides an accurate description of exactly what happened.

A detailed analysis of the Japanese attack plan:
the composition of the air armada from four different carriers; the tactics and actions of the level-bombers, the dive-bombers and the Zero fighters the targets and bombing patterns; we know exactly what they attacked and how successful they were. There are no longer any “what ifs”.

The actions of the defenders:
The Australian Army Anti-Aircraft gun defences. Every site is listed. The RAAF base: what were the events that led to the base being deserted by over 1000 airmen that afternoon?

Where did they go and why? the American P-40 fighters – and more. The 64 vessels present in the harbour have been listed by name for the first time – another two lost vessels have been identified. Individual ships’ actions have been chronicled, and even the effect of the tides has been studied. Japanese losses are detailed – far more of the attackers were hit than has been previously realised. Allied losses are detailed: 235 dead, almost half of them American sailors from the USS Peary and USS William B Preston. 11 ships sunk, and many others damaged. 30 aircraft destroyed.

Carrier Attack is beautifully produced and illustrated and has fine colour maps, and provides a timely and fresh analysis of the raid on Australia’s shores.

Carrier Attack is available to purchase from Avonmore Books – click here for more.