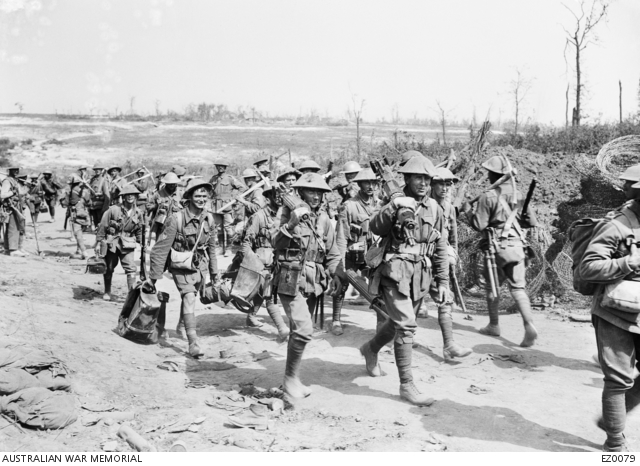 The Australian War Memorial’s Craig Tibbitts reveals the story of two brothers who faced the horrors of Pozières in 1916, and looks at why their letters are so important.

In 1927 the Australian War Memorial’s Director, John Treloar, wrote to the Reverend John Garrard Raws about the wartime letters of his two sons, asking if he might consider donating them to the Memorial. The Reverend responded that sadly, the original letters were not preserved, however typed copies survived and could be loaned. The copies were clearly precious to him and he urged they be returned after copying as ‘they are all I have left.’ In closing he downplayed the significance of his sons’ letters saying, ‘… I doubt if they contain any information of note.’ This reaction was in fact rather common, as found in many postwar donation files at the Memorial. While such assumptions were usually false, in the case of the Raws letters from the Western Front in 1916, their father couldn’t have been more wrong.

A series of letters written by one of his sons, John Alexander Raws, is regarded as some of the most honest, insightful and horribly graphic accounts of the experience of Pozières, where some 23,000 Australians fell.

Born in Manchester, England, in 1883 and 1886, John Alexander (Alec) and Robert Goldthorpe (Goldy) were the younger sons of Reverend and Mrs Raws. The family migrated to Australia in 1895 and settled in Adelaide before later moving to Melbourne. Growing up, the boys attended Prince Alfred College and Alec soon became an outstanding sportsman. With a keen eye, he was a particularly gifted cricket batsman and later turned his hand to tennis, playing at the state representative level. In his later teens Alec embarked upon a career in journalism, working in Adelaide and Perth before gaining a position with The Argus in Melbourne in 1907. There his main work was political reporting.

With the outbreak of war in August 1914, Goldy was working on a plantation in Queensland. He returned home and joined the Australian Imperial Force (AIF) in January 1915 and was soon off to the war. Elder brother Alec, on the other hand was rejected in the initial recruitment. Standing just (165cm) tall and slightly built, he did not meet the required height and chest measurement standard. While Goldy was in Egypt training, Alec again tried to enlist in July 1915. This time, to everyone’s surprise, not least his own, he was accepted. The medical officer asked, “Do you want to go?” to which Alec replied, “Yes.”

Yet Alec Raws was not well disposed to going to war, both from an ideological standpoint and in a physical sense. Nor were his motives for joining up guided by a sense of patriotism towards the British Empire or Australia. He was disgusted by how men in power, governments and ‘the system’ had let the world fall into such a terrible, bloody war. As explained in a letter to his father, Alec joined up to support his mates and brother, already serving overseas and to take a stand for his own principles and a belief that only an Allied victory would bring salvation to the world.

Alec was not built for soldiering. While an excellent athlete, he was not only small in stature, but also somewhat frail in health. In recent years he had experienced fainting episodes and the doctor told him to avoid excessive strain. Violence in any form was also anathema to him. And yet despite all this, Alec was determined to enlist and fight in the war. In April 1916 he finally left Australia to serve overseas. It was said he had confided in a friend before leaving that he felt he would not return.

In the meantime Goldy had been at war for a year, landing at Gallipoli in September 1915 with the 23rd Infantry Battalion. He had seen fighting in the Lone Pine sector following the August offensive and had since been promoted to lieutenant. Now, as his elder brother headed for Egypt, Goldy was on his way to France — to the Western Front. By the time the Australian troops started arriving in France in March 1916, the Western Front had bogged down into stalemate. It had become clear that attacking strongly entrenched German positions protected by barbed wire, machine-guns, and artillery would be enormously costly. This new battlefield would test the Australians to their limit. On 1 July the great allied offensive in France began on the Somme. Fighting on a massive scale continued as both sides fed in fresh divisions over the ensuing weeks. Despite horrendous losses, the British and French were making progress.

On 23 July the 1st Australian Division went into action to capture the village of Pozières, a particularly hard nut to crack in the German defences. They succeeded, but had to endure several days of intense bombardment and counterattack. Suffering terrible losses, they were soon relieved by the 2nd Australian Division, which included Goldy’s 23rd Battalion. On the night of 28-29 July this division attempted another push forward, but the attack failed and losses were again very heavy.

It was at this point that Alec and Goldy’s paths in the war finally crossed — almost. As fate would have it, Alec had secured a transfer to his younger brother’s battalion, the 23rd, but after arriving in France, had to spend two months in training depots and entrenching units behind the lines. Now a second lieutenant, at last he joined the battalion in the front line at Pozières on 29 July but he had only just missed his brother. Goldy had gone into the attack the night before and was now missing. A few days later Alec wrote home:

Goldy is gone – quite probably taken prisoner and all right. If killed he could not have died in agony because our stretcher-bearers were out in No Man’s Land that same night, and then next day, and he could not have been missed. I was out searching for him myself the next night …

Despite being worried sick about his brother, Alec also had to cope with being new to the front line at a time which saw probably the worst and most intense period of fighting and constant shelling the Australians ever had to endure. Another attack took place on 4 August and here the horror really began for Alec. The handful of letters he wrote to family and friends show a man struggling to endure the carnage around him and the dreadful strain of constant bombardment, while leading men he hardly knew. At night the Australians had to send parties out to dig and repair the trenches so they could still offer some protection. Alec described one such night’s work:

It was awful, but we had to drive the men by every possible means … The wounded and killed had to be thrown to one side. I refused to let any sound man help a wounded man. The sound men had to dig … I took it on myself to insist on the men staying, saying that any man who stopped digging would be shot. We dug on and finished amid a tornado of bursting shells … I was buried twice, and thrown down several times — buried with dead and dying. The ground was covered with bodies in all stages of decay and mutilation, and I would, after struggling free from the earth, pick up a body by me to try to lift him out with me, and find him a decayed corpse. I pulled a head off — was covered with blood. The horror was indescribable.

After coming out of the front line on 7 August, Alec wrote of losing in a matter of days, his brother, two of his best friends and almost all his fellow junior officers. All dead. The men were in a terrible state and many suffered from shell shock. Alec went on to describe how he felt:

We are lousy, stinking, ragged, unshaven and sleepless. Even when we’re back a bit we can’t sleep for our own guns. I have one puttee, a dead man’s helmet, another dead man’s gas protector, a dead man’s bayonet. My tunic is rotten with other men’s blood, and partly splattered with a comrade’s brains. It is horrible, but why should you people at home not know? Several of my friends are raving mad. I met three officers out in No Man’s Land the other night, all rambling and mad. Poor Devils!

Alec worried that his nerve had nearly gone during that week of hell, but somehow he pulled through. Other concerns surfaced as well. It was now sinking in that Goldy was dead. Alec wrote how the shock of that realisation set in. A sense of fatalism also set in among many at this time. Alec wrote, ‘It is sad to think that one has to go back to it, and back to it, and back to it, until one is hit.’ No doubt the strain of it all had quickly taken a toll on this brave young man. Bad chest pains and fainting episodes returned, but Alec was utterly determined to go back into battle and see it through.

As the days passed he became more reflective on what had just happened and a sense of anger and bitterness arose. On 19 August Alec wrote to his eldest brother at home in Australia:

Before going in to this next affair, at the same dreadful spot, I want to tell you, so that it may be on record, that I honestly believe Goldy and many other officers were murdered on the night you know of [28-29 July], through the incompetence, callousness, and personal vanity of those high in authority. I realise the seriousness of what I say, but I am so bitter, and the facts are so palpable, that it must be said. Please be very discreet with this letter — unless I should go under.

On 22 August the 2nd Division went back into the fighting. By this stage it had moved slightly to the northwest, towards Mouquet Farm, and if anything had become more intense and bitter. On his first day back in the front line Alec was killed in action. Moving along a communication trench with some of his men, a salvo of artillery struck, killing everyone. He was apparently killed by the concussion of the shells bursting as no wound was found on his body. All that could be managed at the time was a hasty battlefield burial.