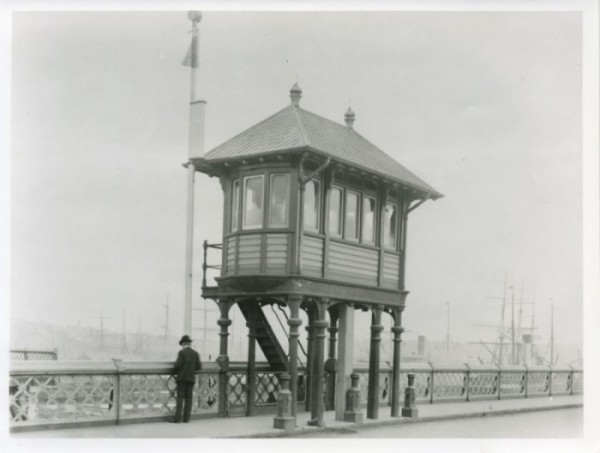 In preparation for a major heritage restoration, Sydney Harbour Foreshore Authority is appealing for any stories, memories, information or memorabilia relating to the historic Pyrmont Bridge control cabin.

The state heritage listed Pyrmont Bridge is the oldest surviving electronically operated swing span bridge in the world. These bridges are movable, rotating horizontally to allow for marine traffic – particularly tall vessels – to enter the harbour, a feature which proved important for the city’s development. Spanning Darling Harbour, the first Pyrmont Bridge opened in 1857.

By the time the current bridge was opened in 1902, engineered by Percy Allan, it was one of the first swing span bridges to be electrically operated. It was also one of the world’s largest examples of this type of bridge.

Pyrmont Bridge’s design and engineering received international praise in its early days and even today it is recognised as a National Engineering Landmark.

A landmark restoration project set to take place in June will restore the equally historic control cabin to the style of its early 20th-century heyday, as well as its original location. (It was moved eastward in the 1980s to make room for the erstwhile monorail.)

Sydney Harbour Foreshore Authority CEO Catherine Gallagher says that whilst there is no shortage of archival resources relating to the cabin, the Authority is interested in hearing from any members of the public with links to the cabin throughout its long history.

Any Sydneysiders with personal stories, information or materials relating to the cabin are encouraged to get in touch before June.

“Of particular interest is any information related to external or internal parts of the cabin, which could very well be tucked away in the attic of someone whose father or relative was involved in operating or maintaining the bridge,” Ms Gallagher says.

“For over a century, the Pyrmont Bridge has connected the city to the western suburbs while allowing tall vessels to access Darling Harbour. Restoring the control cabin to authentic condition is an appropriate way to honour and protect the legacy of a much-loved Darling Harbour icon,” says Ms Gallagher.

“Any suitable material provided before June will help inform the heritage restoration designs and do justice to this unique piece of Australia’s engineering history.”

If you have information, stories or memorabilia relating to the Pyrmont Bridge control cabin, please send electronic copies of this material to info@shfa.nsw.gov.au before June.