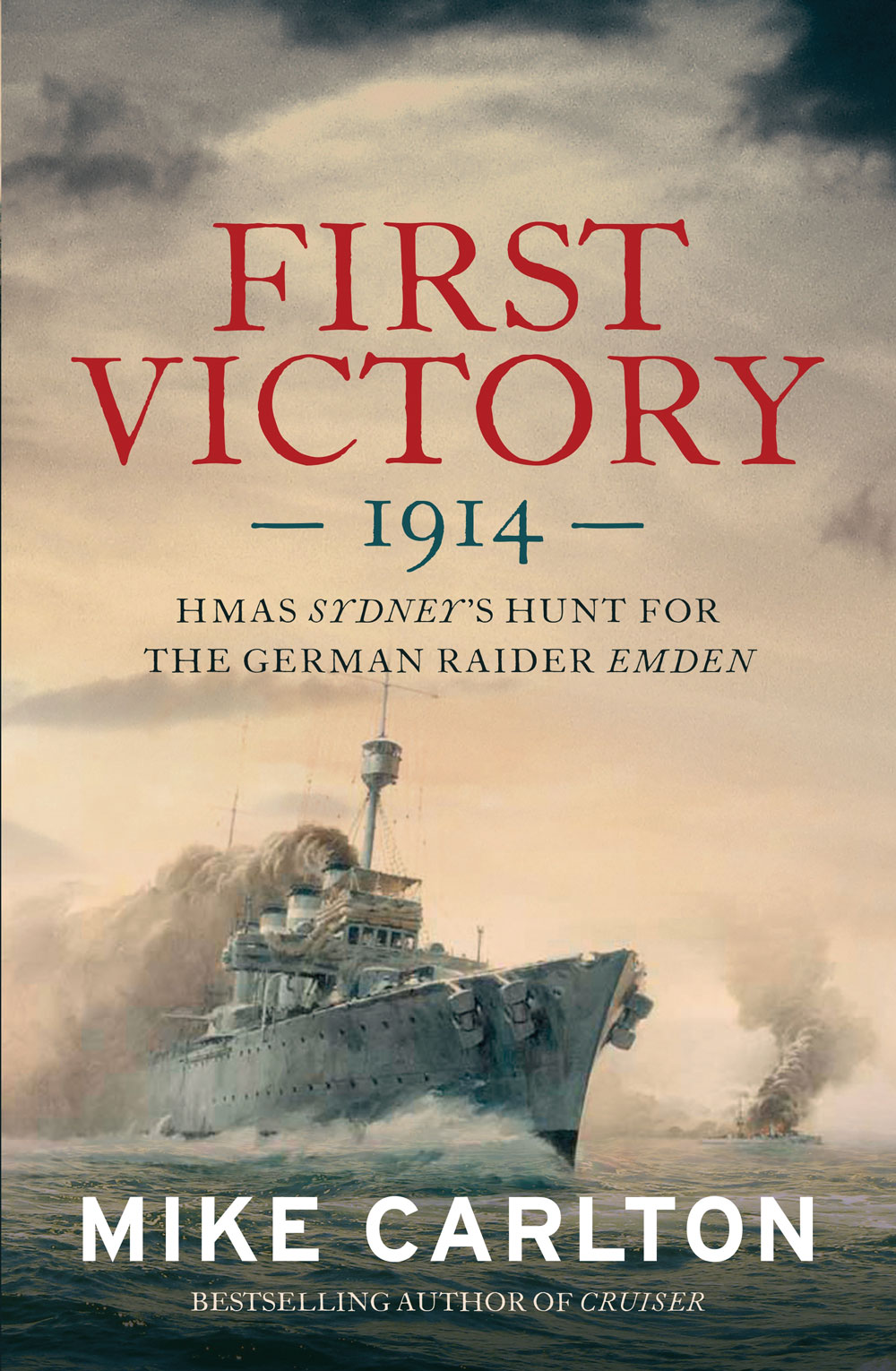 What if things had turned out differently for Mike Carlton and he had become a naval officer instead of a journalist and author? It’s something he still wonders about as he tells Paula Grunseit during a conversation on all things naval history – plus his latest book, First Victory: 1914 – HMAS Sydney‘s hunt for the German raider Emden.

“I’ve wanted to join the Navy from about the age of 11 when I first read the Nicholas Monsarrat novel The Cruel Sea,” says Mike Carlton. “I found it on my parents’ shelves and I read it under the bedcovers with a torch when I was supposed to be asleep. I was transfixed by it. I’m quite sure I didn’t understand a lot of it but the narrative got me and the story of the battle of the Atlantic in the Second World War with U-boats and submarines — it absolutely grabbed me. I must have read it about 200 times since then because it’s still my favourite book. I can quote you passages from it. It awakened in me the immature desire as a kid to stand on spray swept bridges and command destroyers and sink U-boats and that was the first sparking of a love of naval history. Over the coming years I realised what a fabulous field of study it was,” he says.

Having developed his love and aptitude for history at school, Carlton has written two books about great ships and their crews. Cruiser: The Life and Loss of HMAS Perth and her Crew traces the extraordinary stories, adventures and fates of the Australian crew of HMAS Perth, most of them very young men, who fought during World War Two against the Nazis, the Italian fascists, the Vichy French, and the Imperial Japanese Navy. Some were captured by the Japanese and became labourers on the Burma-Thai railway. Only a third of the crew survived to return home at war’s end.

First Victory, published in 2013, tells the incredible story of the bloody battle between HMAS Sydney and the German raider Emden at the Cocos Islands in the Indian Ocean on 9 November 1914.

Carlton says: “I’ve always wanted to write something for the World War One Centenary. I’d known about the Sydney/Emden story for a while and it was the first great naval victory for the newly formed Royal Australian Navy (RAN). It’s never really properly been written by an Australian before. I don’t know why. There’d been a few historical bits and pieces, essays and so on but not a full account of it. It struck me that it was a good story but I didn’t know how rich it was until I got into it especially on the German side — that was the most fascinating thing of all actually because I got enormous cooperation from the German descendants of the Emden’s crew,” he says.

With help from his friend retired rear admiral James Goldrick of the RAN, who is also one of the world’s great naval historians, Carlton was able to connect with the descendants of the Emden’s crew. “They have a very close-knit family association; they call it the Emden Family,” says Carlton. “They are a group of descendants of the crew run by Flottillenadmiral Henning Bess, a retired flag officer of the German Navy, and they could not have been more helpful.” Bess offered the author every assistance, translating for him, finding documents, and obtaining permissions to quote from letters. “They were all just terrific and I owe Henning a great debt,” Carlton says.

Carlton found it exciting when he found his preconceptions challenged.

“I came to like the Germans very much,” he says. “We’ve all been brought up on the idea of the ‘beastly hun’ but these were young, German sailors, no different to the Australian or British sailors whom they fought. They were young men imbued with a spirit of patriotism who fought for their country for whatever misguided reasons on both sides. They were very similar and they were very likeable young men and that to me was perhaps was the saddest feature — they should never have been fighting each other and they treated each other with great chivalry. The German Navy behaved with courage and skill and decency and so too did the Australians. They were worthy foes and they behaved in that way.”

As for the Australian side of the story, Carlton says: “The exciting thing is going to the War Memorial in Canberra and getting out the original documents — the ships logs from HMAS Sydney, the bridge log, the signal log. To hold the original documents or letters in your hand… HMAS Sydney had a young Lieutenant on board called Rupert Garsia who documented the battle in a long, long letter to his father and to actually hold that letter, not a copy of it but the actual fragile paper is an extraordinary thrill and an extraordinary privilege,” he says. Garsia’s father sent the letter on to the Times which published it anonymously on 15 December 1914. It represents the best Australian eyewitness account of the Battle of Cocos.

Readers will be intrigued and surprised, as was the author, by how close the Germans actually were to attacking Australia. Carlton says: “The commonly held view is that World War One was a fight between the crowned heads of Europe and their arms makers and was of no real concern to Australia but it was of vital concern to Australia because the Germans were there in the Pacific and had distinct plans to make life very difficult for us. They were willing to shut down our trade and if need be bombard Sydney, Brisbane, and Melbourne to do it. I got into the network of German colonies in New Guinea and to the north and realised what a threat they were — they were very serious about it. So that was extraordinarily important and I thought it was worth making the point to Australians that we were threatened in the First World War, that we weren’t just off to fight the King’s enemies at Gallipoli and Northern France,” he says.

How does this sit with our long held notions of Gallipoli? “Like all of us I was brought up on the Gallipoli legend,” he says. “It’s a great legend and you cannot downplay the courage of the men who fought there but it was also a defeat and far more Australians died in France than ever did in Gallipoli. And we actually won a few battles there as well. Gallipoli took front and centre stage for a long, long time and understandably so but I don’t believe that it was what made us a nation. We were making a nation well before the First World War broke out. There was an extraordinary burst of energy and creativity in arts, in politics, in the law, in technology — we were flying aeroplanes, that sort of thing. Gallipoli was a staging point on the road but it certainly didn’t make us a nation.”

Carlton says that sacrosanct views about Gallipoli are being challenged. “There’s a book by a former army officer James Brown called Anzac’s Long Shadow: The Cost of our National Obsession and it challenges the place that Gallipoli holds in our national story,” he says. (Click here to read more about this book.)

“Brown doesn’t downplay the death and the sacrifice at Gallipoli but says it should not be centrepiece. It was another battle, it was a defeat. And in fact, it has distorted our view of what warfare is about and particularly about our care for the veterans of more recent wars like Afghanistan. I’m very pleased to see Gallipoli downplayed and to see other battles and other stories brought to the fore,” Carlton says.

As for the differences between writing journalism and writing history, Carlton says:

“Journalism is fabulous training for writing history because it teaches you how to search for facts, how to dig for information, how to approach people and ask them [questions], but journalism doesn’t give you much opportunity for long form writing. When writing history, you have to assemble your facts, distil them to present the most accurate picture of what happened and you then have to turn them into a narrative that the reader will enjoy.”

“I derived a lot of inspiration oddly enough from historical novelists and navy novelists like Patrick O’Brian who wrote the Master and Commander Aubrey-Maturin series and going back to The Cruel Sea and even the Hornblower stories. I tried to bring to the history I was writing some of the techniques of the novelist to make sure the story cracked along, that you wanted to turn the page to see what happens next and that’s really important to hold the reader,” he says.

Knowing when to stop the research and get down to the hard business of writing is often the hardest part, says Carlton. Getting side-tracked along the way is a blessing and a curse because it can be so enjoyable and so distracting. “I love doing the research,” he says. “That’s the most fun part of all — going down rabbit holes and finding things, turning up a rare document.”

Despite the mountains of information and ease of availability that the Internet affords to researchers – for example all of the Kaiser’s speeches are online – Carlton says that nothing beats holding original documents, meeting people, and talking to descendants.

Another huge challenge is the need to filter stories. He says: “When you’re writing about a ship or ships, there are several hundred people on board and each one has a story. You can’t tell them all so you have to be selective and that’s the tricky bit.”

So was his mother right in having convinced him not to run off to sea and join the navy? She told him she thought it was “low paid, cold, and dangerous.” Carlton says: “I don’t think I would have been a very good naval officer — I went into journalism instead. My mother was probably right but you always have that lingering wonder…”

Mike Carlton will appear at the Byron Bay Writers Festival on Friday 1 August, joining Dr Clare Wright, James Brown and chair Russell Eldridge for a session called ‘History: A Work in Progress?’, sponsored by Inside History.