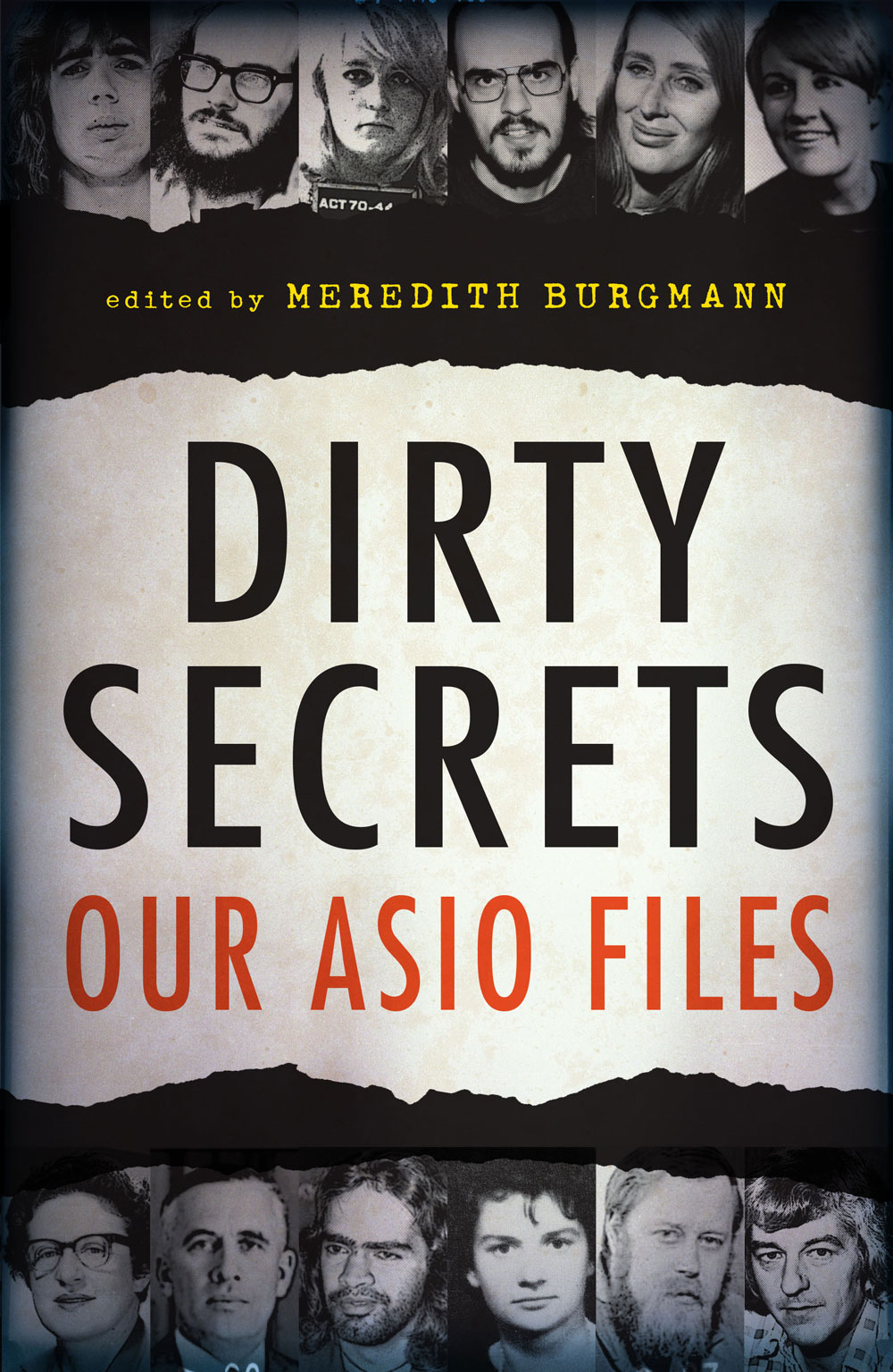 From time to time, we’ll be talking to great Australian authors about what inspired them to start researching and writing their stories.

Here, we look at mid-20th century politics, activism and government surveillance in our chat with Meredith Burgmann and Wendy Bacon on their new book, Dirty Secrets: Our ASIO Files.

Meredith Burgmann, who both edited the book and contributed a chapter, is a politician, former President of the New South Wales Legislative Council and current President of the Australian Council for International Development. She is also the author of Green Bans, Red Union: Environmental Activism and the New South Wales Builders Labourers’ Federation (1998) and The Ernies Book: 1000 Terrible Things Australian Men Have Said About Women (2007).

Investigative journalist and political activist Wendy Bacon also contributes a chapter. A former academic at the University of Technology Sydney, Wendy is now Professor of Journalism at the Independent Centre for Investigative Journalism. See her website here for her journalism work.

Published by NewSouth Books, the description of Dirty Secrets: Our ASIO Files reads: “In this moving, funny and sometimes chilling book, leading Australians open their ASIO files and read what the state’s security apparatus said about them. Writers from across the political spectrum including Mark Aarons, Phillip Adams, Nadia Wheatley, Michael Kirby, Peter Cundall, Gary Foley and Anne Summers confront – and in some cases reclaim – their pasts.

Reflecting on the interpretations, observations and proclamations that anonymous officials make about your personal life is not easy. Yet we see outrage mixed with humour, not least as ASIO officers got basic information wrong a lot of the time, though many writers have to contend with personal betrayal. Some reflect on the way their political views have – or haven’t – changed.”

IHM: Meredith, how did this project come about?

Meredith: In 2008 an article appeared in the Good Weekend about my own personal file. Shortly afterwards, Philippa McGuinness from NewSouth Publishing (previously University of New South Wales Press) approached me and asked if I would put together a book about other ASIO files. As the project proceeded I thought it would be more interesting to ask well-known Australians to write about their files. Firstly because readers would have an immediate rapport with the subject because they would know something about them already and also because the fact that they were being watched was so ludicrous.

IHM: How did you track down your file? What was that process like?

Meredith: I was sure I had an ASIO file because in 1999, after Bob Carr had closed down the increasingly corrupt and incompetent NSW Special Branch (which acted to some degree as the state branch of ASIO), I applied for my Special Branch file and received an amazingly detailed document. So in 2005 I applied for my ASIO file from 1968 up to 1975 under the “30 year rule”. It was actually reasonably straightforward. In those days you applied directly to ASIO but now you apply through the National Archives.

IHM: Were you aware at the time that you were being spied upon?

Meredith: We all laughed about being followed by ASIO but I’m not sure I actually believed it. We always joked that at May Day and important rallies there would be an ASIO photographer on the third floor of Woolworths looking out on to the steps of Sydney Town Hall. Sure enough when I got my file, there was a photograph of me addressing the Third Moratorium in June 1971 from the Town Hall steps beautifully taken from the third floor of Woolworths.

I was unprepared for the extent of the coverage of my personal life. They even reported on where my car was parked at night and what bottle shop I visited.

IHM: What was it like to read notes and comments on your personal life made by people who were, essentially, spying on you?

Meredith: It was a bit confronting. I quickly worked out who was the informant in an organisation I belonged to called the Southern Africa Liberation Centre but I was relieved it was someone I didn’t like at the time. I don’t know what I would have done if I had discovered that someone I really liked was spying on me. Penny Lockwood discovered that her boyfriend was an ASIO plant.

IHM: What did you find most surprising in your file?

Meredith: I think the amount of time and energy ASIO put into checking up on peripheral people in my life. They stole my address book in May 1970 and then investigated everyone in it. Even my elderly aunty in Scotland had a notation beside her name. They spent 20 pages digging into the life of a family friend who was in the navy and then got him transferred from the job he loved doing. I felt terrible about that.

IHM: As the editor of Dirty Secrets: Our ASIO Files, what did you find most amusing or affecting when going through other contributors’ stories of reading their files?

Meredith: I found Alan Hardy’s chapter about his father (famous Communist party author Frank Hardy) very moving. Alan was finding out things he didn’t know about his father as he read the file.

There were also some very funny bits. They described Anne Summers as “fashionably but not very well dressed” and Gary Foley as “appears to be in the Black Power Movement and is a pest”. They thought David Stratton deserved attention because he wore a red tie and handkerchief to Polish National Day.

IHM: What were some of the insights you gained into ASIO and, more broadly, government at the time?

Meredith: ASIO interpreted their task of monitoring ‘subversion’ as spying on anyone who disagreed with the conservative policies of the government of the day. Therefore if you opposed the war in Vietnam or opposed apartheid you were considered a legitimate target. For instance they were tapping the phone of Jim Cairns (who was later Deputy Prime Minister under Whitlam) simply because of his anti-Vietnam activity.

IHM: What insights into government surveillance did you take from this process and how relevant do you think these are in today’s political, and technological, climate?

Meredith: I’m afraid that I was appalled by the poor quality of the agents who were following us. They attempted no real political analysis and were often wrong or confused about details of their surveillance. When people ask me whether our secret police are more efficient today, I can only answer that we really don’t know but the evidence of 30 years ago does not make for very reassuring reading.

IHM: Wendy, how did you become involved in Dirty Secrets: Our ASIO Files?

Wendy: I was invited by my friend Meredith Burgman to contribute a chapter on the files of myself and my brother Jim Bacon.

IHM: How did you track down your file?

Wendy: I was surprised to find that my own three-volume file was online although my permission had not been sought. It had been publicly available for quite some time without me even knowing. It was not that I was not interested but simply that I was always busy and imagined that I would apply for my files sometime in the future. I found out later that the National Archives have no obligation to inform the subject of the file when it is released.

My brother, who died in 2004, already had three volumes of his file. So I was able to get these from his widow Honey Bacon. I applied for the other four volumes and went through them in hardcopy at the National Archive. Some parts of the files (more than just the identify of the informants) were redacted. Later I organised for Jim’s files to go online as well.

IHM: Were you aware at the time that you were being spied upon?

Wendy: I was certainly aware in the 1970s that I was under surveillance by NSW Special Branch that liaised very closely with ASIO. They photographed me at demonstrations and I heard them talking about me once on a walkie talkie at a Springbok demonstration.

We used to talk about whether there were spies who had infiltrated our activities or not but we always made allowances in a joking way for our own paranoia. We did not take it too seriously.

Later in the 1970s I used to hear the clicking sounds that back then were a sign of phone taps but I also think that was Special Branch not ASIO. So I was very surprised to see the extent of ASIO surveillance. For instance, they sent a spy to a very small Libertarian Push conference for a whole weekend who prepared a fairly detailed account of the proceedings and described all the people. They attended some feminist meetings and again prepared detailed accounts. There were anti fascist meetings in Melbourne where scores of names and phone numbers were gathered. I gained the impression through comparing our files that the surveillance was more efficient in Melbourne than in Sydney.

There was ongoing phone taps on premises that were visited by Monash Labor Club students in Melbourne so conversations between my brother, who was a very active member and leader of the Club, and my mother were taped. Also they tracked down our siblings to find out what they were doing. They noted the places where my sisters worked and attended school. I certainly did not expect that and I would not be surprised if there were calls to those places although I don’t have any evidence of that.

I am sure my brother knew he was under surveillance as he wrote to me about it at the time. He was very concerned about being framed by the police. He was part of a campaign against ASIO powers so he and others were demonstrating outside ASIO headquarters in Melbourne while they were being spied upon.

IHM: What was it like to read notes and comments on your personal life made by people who were, essentially, spying on you?

Wendy: Given the amount of material, there were not as many comments on my own personal relationships as I expected. In my case, it was more political. In Jim’s cases, there were some details, mainly about his partner and children and their movements. I think perhaps the people who were more intensely followed in their personal lives were more closely connected with the Communist Party than I was.

IHM: What did you find most surprising in your file?

Wendy: The most surprising aspect of my file was the discovery that they had several records of my parents’ in the 1950s and very early 1960s. I was really astonished by that. My parents were probably progressive in the context of those times but I didn’t imagine they could possibly have been of interest to ASIO.

For example, they attended one or two meetings of the Kew Peace Group, an organisation that I have not been able to trace. However they appear on a list of attendees, along with their addresses and occupations. I will research more about the group in the future by contacting the families of the other people listed so in that sense it is a rare and valuable record of a little known group operating in Melbourne’s civil society.