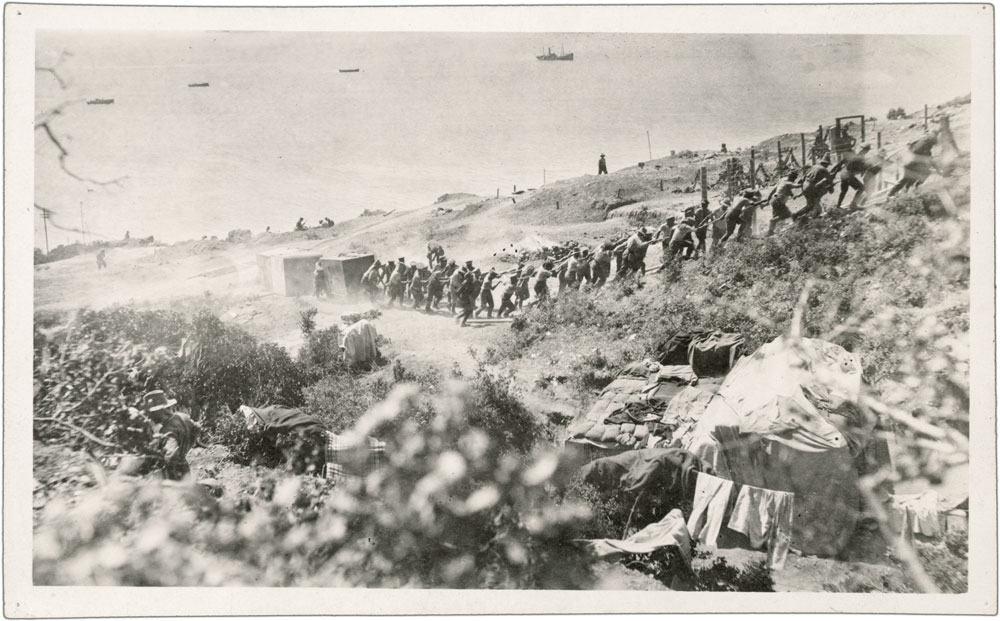 War didn’t affect only soldiers at the front,” says Amy Lay, a curator with the National Archives. “Our records show activity and anguish on the home front which the website also aims to portray. It shines a light on those caught up in the middle, with records of people classed as enemy aliens who may have been living in Australia for years.

The website is a treasure trove for family historians, with World War One service records from both Australia and New Zealand. It also includes records which show artistic and literary works from the era, censorship records, the dossiers of munitions workers and merchant navy seafarers — and much more. Photographs taken by future Governor-General Lord Richard Casey during the war are also featured. He left Australia with the first AIF in 1914 as the aide-de-camp to Sir William Bridges at Gallipoli.

“The service records contain extensive information and give an insight into the reality of war,” says Lay. “They show where soldiers served, list details of injuries and stays in hospital, and some even include wills and letters from relatives.”

The website also enables people to add their own tributes to diggers from their home town — perhaps a photograph, letter or information on the family.

Some famous names
While many people will find their own ancestors in Discovering Anzacs, there are also stories of more famous servicemen and women, says David Knight from Archives New Zealand.

“One of the New Zealand soldiers who features on the site is David Gallaher, captain of the famous ‘Originals’, the All Blacks team which toured Britain, France and North America in 1905 and 1906,” says Knight.

“He had volunteered for service in the Boer War and at the outbreak of World War One was keen to volunteer again. But he hesitated because he had a wife and child. When his brother Douglas was killed in France in June 1916, David felt it was his turn to go and he left New Zealand with the 22nd Reinforcements in February 1917.”

Gallaher was wounded at Passchendaele on 4 October 1917 and died a few hours later. Listed as aged 41, he was really almost 44 years old. He had first lowered his age when he volunteered to fight in the Boer War. Another New Zealander who features on the website is Keith Caldwell, the country’s highest-scoring WW1 air ace.

Caldwell became one of the most widely respected fighter or ‘scout’ pilots on the Western Front, especially when in command of No. 74 ‘Tiger’ Squadron,” says Knight. “Under Caldwell’s command, the squadron destroyed more than 200 enemy aircraft in less than eight months — making them one of the most successful at that time.

As well as winning the Military Cross, Caldwell was also awarded the Distinguished Flying Cross and Bar, the Croix de Guerre (Belgium), and was twice mentioned in dispatches. He had several close calls and survived a mid-air collision by standing on the wing and skilfully guiding his crippled plane to descend behind British lines. He jumped clear just before it hit the ground.

Accusations of fraud
With so many young men wanting to enlist when war was first announced, some lied about their age, and perhaps changed their name, to be eligible. Seventeen-year-old Australian Herbert Scanlon, for example, put up his age to 20 years and enlisted under the name Herbert Sanlon.

“After the war he became a farmer in New Zealand and wrote a series of stories about life as a digger under his real name,” says Lay. “He later faced accusations of fraud, partly because he had signed up in Australia and partly because he enlisted under a different name. They couldn’t find his service file in the New Zealand records. Several of the books he wrote are held in the National Archives’ copyright collection.”

“He invented many things, including a tank in 1912, which he tried to sell to the Australian army — but they weren’t interested at the time,” says Lay. “In his file there are letters from friends advising him to offer his invention to the Germans but he was never tempted to do so. The National Archives holds both his service file and his tank invention file. He continued designing and engineering in France after the war.”

The digital images were given to the National Archives of Australia by the Department of Veterans’ Affairs after a staff member identified their Australian uniforms in a collection at the Imperial War Museum in London.

To explore the website and the collections it holds, visit discoveringanzacs.naa.gov.au