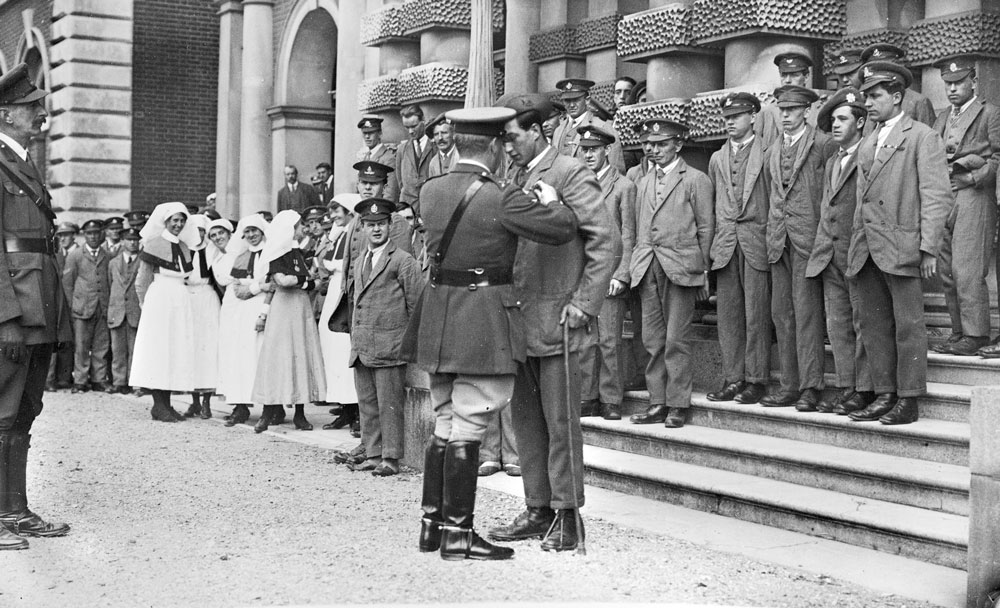 Was your ancestor one of the tens of thousands who served in World War One under an Allied banner? Military historian Neil Smith, from Mostly Unsung, explains why their records can be so difficult to find, and which are the best places to look.

Australians are well served when it comes to tracking down the 430,000 who served in the Australian Imperial Force and Royal Australian Navy in World War One.

Researchers can be frustrated though when records of an Australian who enlisted in World War One just can’t be found — often, this is because he or she was one of the 50,000 or so ‘Other Anzacs’ who had served under the colours of an Allied country or in a more obscure Australian role.

Before Gallipoli
Men of the Naval and Military Expeditionary Force to German New Guinea were the first Australians committed to battle, months before the heights at Anzac Cove were stormed. Here is the first area of war service for which records are scant at best. Naval Reserve sailors Bill Sercombe from Queensland and Cyril Harslett from South Australia, who received their baptism of fire near Rabaul on 11 September 1914, are cases in point. These men were reservists or part-time sailors and like many of their Army Militia colleagues or munitions workers are difficult to locate in official records.

About the same time, in England, another group of Australians sailed for France under the command of Newcastle surgeon Bill Eames. This unique group of men and women for which few records are available were members of the Australian Voluntary Hospital. The accolades received by these early arrivals at the front were many, including one from the King himself who said during his visit to the hospital, “I am very pleased”, even though during the day, his horse reared and fell on him. One of the oldest members of the hospital was William Cope, a New South Wales solicitor who had served in the Sudan in 1885 and later the Boer War. When war broke out in 1914 Cope joined the French Red Cross and later transferred to the Australian Voluntary Hospital. His service didn’t finish there either as he was later decorated for rescuing men under fire.

By the time the Australian and New Zealand Army Corps arrived at Gallipoli on April 25, 1915, there was already a growing number of Australians whose service history would not survive to the present day.

British Regiments
The bulk of the Other Anzacs who served with Allied nations in the Great War did so with the British Army. Unfortunately most British World War I military records were lost in the Blitz so it is difficult to identify and gather war records for Australians among the multitude of Great War British regiments and corps, although there are some areas worth pursuing for information. A high percentage of Australians who enlisted with the British forces were medical men with the Royal Army Medical Corps, or nurses such as South Australian Rosa Stows, attached to the Queen Alexandra’s Imperial Military Nursing Service. Another group that boasted a strong leavening of Australians was the Royal Flying Corps, with Bob Little from Hawthorn, Victoria, being the top scoring fighter ace in World War I. Another aviator was Ted Boyd from Perth who,
at age 17, made his way to England with the Merchant Marine. Once there he enlisted and became a Wireless Observer flying over Flanders.

He was shot down and despite many escape attempts remained a prisoner. He suffered great cruelty and starvation all because he once tried to send a message home by carrier pigeon, in which he said he had been Picked up by Huns. His captors took great exception to this term and treated him accordingly.

Every British regiment seems to have had at least a handful of Australians in the ranks. King Edward’s Horse enlisted hundreds of Australians studying or working in England. Lieutenant Frank Ham, an agent from Armadale, Victoria served with this regiment and died in Ireland in early 1916. Ted Knox was an accountant from Bellevue Hill in NSW. He served with the Artillery in France and was decorated for his gallantry. Lieutenant Sydney See was another artilleryman and son of NSW Premier Sir John See. Sydney was killed in action near Mametz in late 1916 leaving his brother Villiers to continue the fight with another British regiment.

Large numbers of Australians serving with the Allied forces were well educated and as a result were often commissioned. Stanley Bruce, an old Melbourne Grammar boy and later Australian Prime Minister was promoted to Captain with the Worcester Regiment.

Some gave more humble service like the distinguished artist Arthur Streeton, who was working in London prior to enlistment in the Royal Army Medical Corps where he served as a Private until discharged unfit in February 1917.

Not so well known perhaps, but none the less patriotic was Victorian Robert Rogers who served as a Trumpeter with a fortress garrison in Essex. Australian Tom Murray had previously deserted but regained his honour when he re-enlisted with the Royal Irish Rifles under the name Bandon. Other Australians like Victorian Walter Skelton couldn’t serve in uniform due to age or disability and chose to become munitions workers in England.

New Zealand, South Africa and Canada
Other Anzacs can be found among many friendly forces. Naturally there was a strong cross pollination of men between Australia and New Zealand. Tasmanian Cecil Kingston and George Kennedy from Brisbane were two of hundreds of Australians who enlisted with the New Zealand Expeditionary Force. Most Commonwealth armies boasted some Australians in their ranks. Victorian James O’Donnell was with the South African Horse while Bill Pinney from Moonee Ponds signed on with a South African infantry regiment. Queenslander Rupert Stiles and Auburn man Cecil Kinross were members of the Canadian Expeditionary Force so at least their records are easily traced through the National Archives in Canada (see www.collectionscanada.gc.ca)

Non-Commonwealth Armies
Some Australians sought service in non British Commonwealth forces. Sydney-born John Hope became a flyer with the US Army Air Force and Victorian Geoffrey Rollason served with the US Army in both world wars. It is not clear why the French Army seemed to attract so many Australians. Perhaps there was a connection with New Caledonia. Louis Havre became a Soldat while several men from the Pelletier and Playoust families in Sydney were attested into the French Army, together with Francois Henry from Williamstown in Victoria.

It’s well recorded that there was a scattering of ethnic groups such as the Chinese throughout the Australian Imperial Force — such as the four Langtip boys who rode in the Charge at Beersheba against Turkish forces. It is something of a surprise though to find that two Victorians served with the Chinese Labour Corps. They were Ernest Harrison and Charles Calcutt, who campaigned with the Chinese on the Western Front. Maintaining the Asian theme, Clive Gaunt from Ballarat was commissioned into the Rangoon Volunteer Rifles in 1910 and served throughout the Great War, while George Kingsell from Dulwich Hill, Sydney, rode with the Lucknow Cavalry until discharged due to sickness in November 1917.

The Ceylon Planter’s Rifle Corps is a much overlooked Anzac partner. This small group of about 200 Ceylonese men fought side by side with the Anzacs on Gallipoli as part of the 1st ANZAC Corps. They soon became well known as General Birdwood’s bodyguard. Bugler HW Byrde was an Australian in this Corps but more work is needed to determine how many of others were Australian.