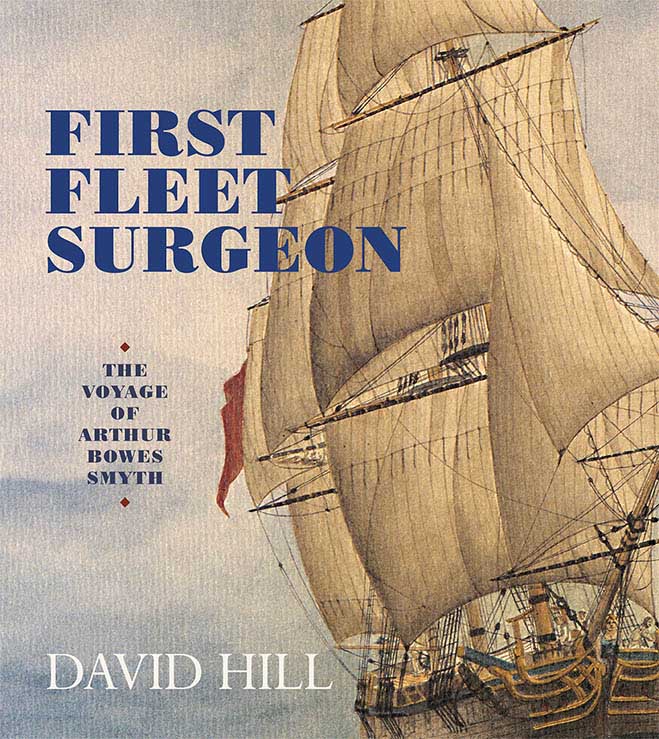 The journal of surgeon Arthur Bowes Smyth, who travelled onboard the Lady Penrhyn convict ship, reveals much about the First Fleet voyage, attitudes to female convicts and life in the early settlement, says author David Hill. Here, he tells Sarah Trevor about his new book, First Fleet Surgeon: The Voyage of Arthur Bowes Smyth, published by the National Library of Australia.

IHM: What drew you to the story of Arthur Bowes Smyth?

David: Most of the journals written by those on the First Fleet were by officers who were careful not to offend their superiors. Arthur Bowes Smyth wrote a private diary which in many respects was more revealing and frank. He even criticises the fleet commander Arthur Phillip.

IHM: What were some of the challenges faced by surgeons aboard convict voyages?

David: The surgeon’s tools were restricted to a few items he carried in his bag, including puncturing instruments for bleeding. Otherwise the surgeon simply had to make do. Bowes Smyth was on the Lady Penrhyn, which carried only women convicts. There were no medical provisions for children or for the children born on the voyage. Many diarists and observers of convict women, on the First Fleet and beyond, were quite harsh in their judgment of these women.

IHM: What were Arthur Bowes Smyth’s attitudes regarding the women of the Lady Penrhyn?

David: Bowes Smyth, like many of the ‘officer class’, had a low regard for the women on the Lady Penrhyn. He probably never encountered their class before he agreed to sign on as ship’s surgeon. Many of the other officers took up with convict women during the voyages but there is no evidence that Bowes Smyth did.

IHM: What sorts of impressions of the early colony are recorded in Bowes Smyth’s diary?

David: He was only in Sydney for three months before he left to return to England. Yet he provides a valuable perspective of the arrival of the fleet and the struggle to establish the settlement. He also provides one of the frankest accounts of the management of the early days of the colony – including the claim that the marines were punished more severely than the convicts.

IHM: Which stories affected you the most in the course of your research?

David: The total disregard by the British of the condition or suitability of the convicts sent on the first fleet. According to Bowes Smyth the oldest was an 82-year-old woman. The youngest was a boy who was convicted at the Old Bailey when he was 9 years old. Nineteen convict women gave birth during the eight-month voyage, the first only weeks after leaving Portsmouth, suggesting many were obviously pregnant before they left.

IHM: Which stories amused you the most in the course of your research?

David: The convicts being ‘showered’ with fresh oranges at Rio di Janeiro where they stopped for water and food. Arthur Phillip and his colleagues were enlightened about hygiene and diet and they were probably correct in their claim that the convicts were in better health by the time they left Rio than when they had left Portsmouth five months before.

IHM: Which resources did you find most helpful in researching Bowes Smyth and the voyage?

IHM: What resources did you come across that haven’t been widely used by others?

David: Some of the other journals written by less prominent men on the first fleet. For example, Jacob Nagle, an American who fought against the British was pressed into the British navy and was a seaman on the Sirius. Nagle was with Arthur Phillip the first day Europeans sailed into Sydney Harbour. He was also survived the shipwreck of the Sirius at Norfolk Island.

IHM: If you could track down one thing you haven’t yet managed to find out, what would it be?

IHM: What’s your best tip for people wanting to write a history book of their own?

David: Have some idea of the structure of your book before you start writing. Even if it is just a short outline of each chapter.

Fancy a copy of First Fleet Surgeon for yourself? We’re giving away 5 convict-themed book packs containing First Fleet Surgeon as well as June Slee’s Crime, Punishment and Redemption. Simply subscribe or renew your subscription to Inside History before the end of June to enter the draw. Good luck!