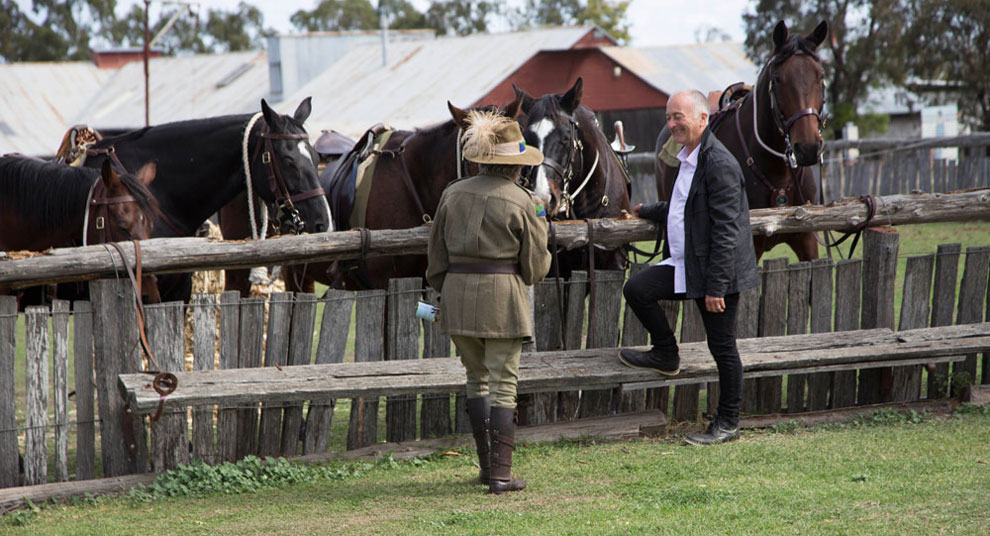 A German bullet from the Somme and the notebook that saved a soldier’s life. A wedding dress remade seven times during World War II. American servicemen living it up with local girls. Sir Tony Robinson’s new television series Tour of Duty sees him discovering all sorts of links to war in Australia. Cassie Mercer talks to the famous actor and presenter in issue 28 of Inside History magazine, about why he loves filming here and what the future holds for genealogy.

Sir Tony Robinson bounds through the crowd at Newcastle Museum and on to the stage. The audience cheers enthusiastically as he welcomes everyone to the day and begins to rehearse his introduction for the cameras.

The legendary British actor is in town to film his latest series for Foxtel, Tour of Duty, which looks at 100 years of war in Australia, and history lovers in Newcastle have turned out in full force to greet him. Residents have brought along war memorabilia, family heirlooms and hair-raising stories, and there are military experts on hand to decode documents and identify precious objects.

It’s part of a momentous tour around Australia and New Zealand, which also takes in Toowoomba, Hahndorf, Bathurst, Launceston, Ballarat, Darwin, Fremantle, Auckland and Dunedin for the 10-part series.

And each city has brought with it its own discoveries, all while the cameras are rolling. For Robinson, uncovering these personal stories — passed down through generations, but not otherwise widely known — is part of the attraction.

“I wanted to make a series which, at the heart of it, was the notion of us all sharing our history together,” he says. “And actually Australia is a very easy place to do that because so many of its settlements are so far apart, there’s still a real sense of local pride… and I absolutely adore that.”

One stand-out story for Robinson, uncovered during filming, was that of a soldier wounded at the Somme and the notebook he’d brought with him on his return home.

“After he was shot he went to England to be patched up for about six or seven weeks, and was given his uniform back, and given his ticket to go out to the Front again. On the way to the dock, he felt into his inside pocket, which he’d not felt since the day he’d been shot up.

The notebook, complete with bullet, is now cherished by his descendants. The stories from the homefront are just as enthralling, such as the one about a well-worn wedding dress from Ballarat. It was 1942 and Ballarat, like many towns, was doing it tough. But a few enterprising brides made the best of what they had.

“We saw a wedding dress that a woman wore in 1942,” explains Robinson. “And when she finished with it, her sister got married, and she wore the same dress, which they had to lengthen. And then somebody else wore it, and they had to contract it again. And it went up and down and in and out seven times, and we’ve got this great series of wedding photographs of how one particular group of women made the best of themselves during war. And I thought that was a lovely story,” he says.

“And, again, in Ballarat there were all these American soldiers turning up out of nowhere and all these young girls on their own with the most sophisticated, handsome, comparatively rich young men — and then suddenly they all disappear again several months later. That was a great narrative.”

Robinson is well known for his love of history. And it was evoked in him from a young age.

“As far back as I can remember, I’ve had it, but I didn’t know it was history; I thought it was my dad telling me stories,” he says.

“I’m very passionate about parents talking to their kids about what things were like when they were young and about their parents as well. I think that one of the best things you can give children is a sense of the continuum of history, that sense of society, the development of society, and the possibility of progress. And my dad gave me that in spades, but he was a very funny man and so in a lot of ways, what he said was very funny.”

“And of course he went through the Second World War — he was a working class boy away from home for the first time, mobile for the first time, meeting the sorts of people that he never would have had the opportunity to meet anywhere else. And he loved the war! He had the greatest time possible and just wanted to tell me all about it.”

So what does Robinson think the future holds for genealogy?

“I absolutely believe that we’re embarking on a new step in our ability to understand human history,” he says. “And it’s come about via genealogy. But I think we’ll probably stop calling it genealogy very soon, because what’s more important is about how it can help us trace the movements of people across the globe over thousands of years.

“DNA, plus all these archaeological techniques like dendrochronology, offer us the ability to decode chemicals in the ground that showed us where people lived, where animals lived, for thousands of years. I think we’re going to be able to understand ourselves in ways that we can hardly dream of at the moment. And to be at the beginning of that, I think, is enormously inspiring.”

Sir Tony Robinson’s Tour of Duty airs on The History Channel on Tuesdays, 7.30pm until 2 June.