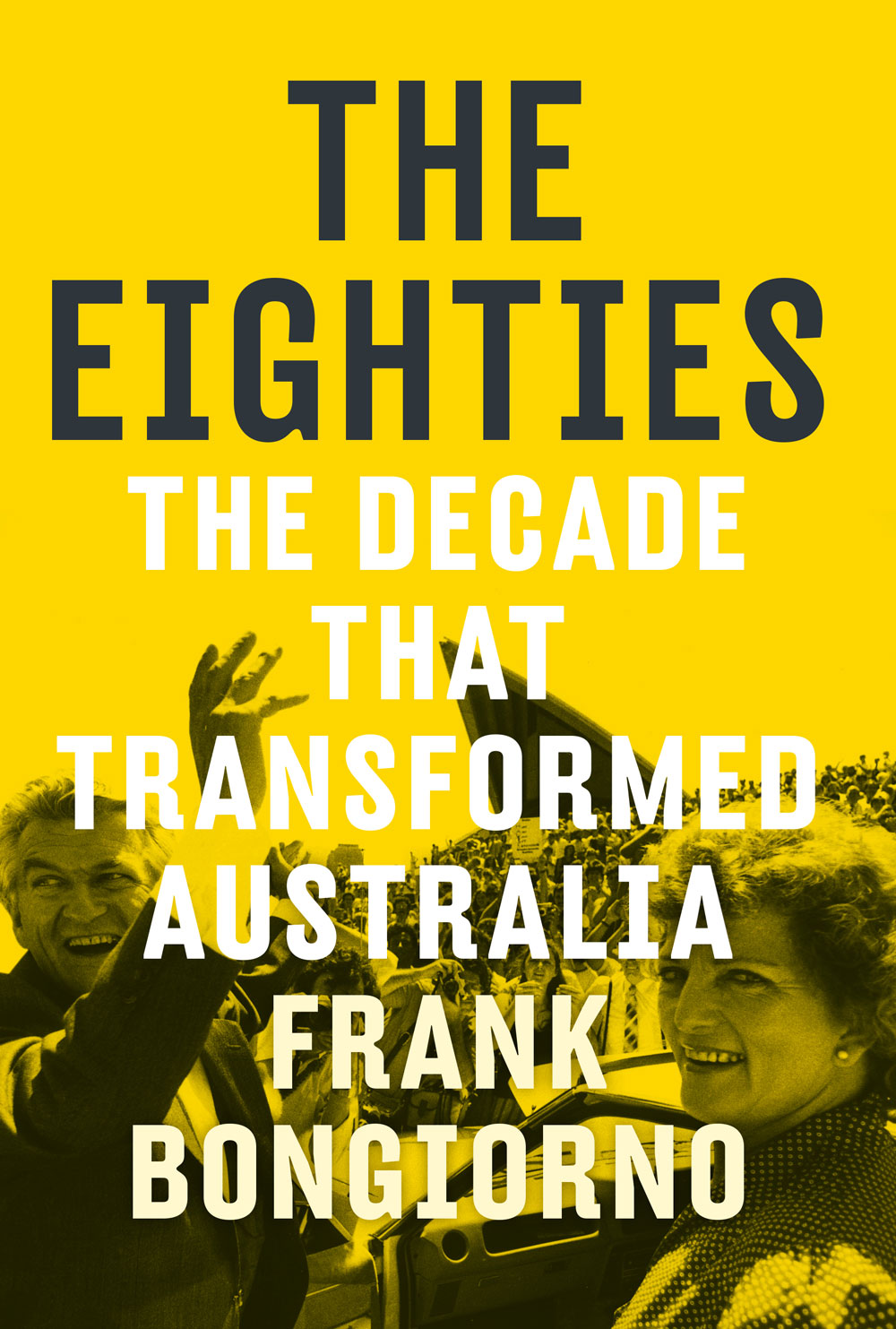 Beyond the big hair, shoulder pads and iconic moments, the 1980s were a time of transition in Australian history. Historian Frank Bongiorno, Associate Professor of History at the Australian National University, tells us more about this crucial period and his new book The Eighties – The Decade that Transformed Australia (Black Inc. Books).

IHM: What originally drew you to write a book specifically about the 1980s?
Frank: I noticed a few years back that the 1980s seemed to loom large in debate about the present; the Hawke years had become the measure for considering the quality of our present politics, media and much else. It was almost as if the 1980s had become for us what the 1960s had been for the 1980s; a time when things were both different and (for many) rather better!

This sense extended to popular culture, too, as a nostalgia industry grew up around the decade. People who lived through the period as teenagers or twenty-somethings recalled with great fondness the music, the films and the fashions – and they now often had the money to indulge their nostalgia, too.

That interested me, not least because the way the 1980s was often being presented – as a golden era – seemed to me to blot quite a lot out that mattered. In particular, I thought there had to be more to the 1980s than a story of big hair, shoulder pads, and how wise and successful our politicians were back then.

And having lived through the period as a teenager, I was interested in returning to it as a historian, wondering how my own memories of that time measured up to what I might be able to glean of other people’s experiences. Above all, I could see that there were some great stories to tell!

IHM: Historically speaking, what do you think are the most distinctive or significant elements of 1980s-era Australia?
Frank: It’s well to recall the economic changes – the floating of the dollar and the thrust towards a more deregulated and open economy – because these did have an enormous effect on the lives of many Australians. People were forced to see their own personal fate as tied to the performance of their economy in a way that had seemed less direct during the period of regulated, rising affluence from the mid 1950s through to the early ’70s. At the same time as Australia was engaging with Asia in new ways through tourism, immigration, trade and investment, there was an upsurge of nationalism, associated with the America’s Cup victory in 1983 and the Bicentenary of 1988, which also became a major occasion for a reappraisal of relations between white and Indigenous Australians.

As the country became more multicultural, large numbers of people also seemed more intensely interested in history. Genealogy became increasingly popular, pride in convict heritage was greater than ever, and property-developers sold heritage homes. Australia was said to be ‘flavour of the month’ overseas; it was packaged up for the global market, whether what was on sale happened to be tourism, Crocodile Dundee, Neighbours, Aboriginal art or Foster’s lager. Australia’s entrepreneurs, no less than its sports stars and entertainers, took on the world and believed they were winning.

IHM: As a historian, what was it like to research and write about a decade that you’d lived through?
Frank: It’s certainly different to writing about a past you didn’t live through. The advantage is that you have a stock of memories that can provide the basis for further enquiry; you are not starting from scratch!

But there are dangers, too: you think you know what happened and how it happened but when you begin to dig a little deeper, things seem more complicated. At the time, I might have read about a particular event in one newspaper, and perhaps seen a television report, or heard a snatch of news on the radio, maybe talked about it with friends. But as a historian, one would look more broadly, to a wider range of papers, to archival documents, to long-form journalism that I didn’t read at the time (teenagers weren’t major readers of the Bulletin, for instance!).

Yet you also can’t quite help recalling what you were doing and perhaps even where you were when you write about a particular happening. As I wrote of the rise of the video cassette recorder, I couldn’t help recalling that ours was pinched in 1989!

IHM: The Eighties – The Decade that Transformed Australia covers not only the iconic figures and moments of the decade, but also the ‘forgotten stories’ of everyday Australians. What were some of the challenges involved in researching and writing the book?
Frank: Even for the 1980s, locating those voices and experiences of ordinary folk can be a challenge. There are so many larger-than-life figures that it’s easy for others to be crowded out. But there was more to the 1980s than Bob Hawke, INXS, Alan Bond and Kylie Minogue, even if they all need to have their place.

Because one of the things I wanted to do in this book was to show that there were many ways of living the 1980s, it was important to find out about whose who didn’t much figure in the media, and especially those who have been largely forgotten when people recall the decade nostalgically.

I was interested in what it was like to be unemployed, or to have one’s factory employment taken away, or to find that the loan that you were persuaded to take out in a foreign currency by a loan manager meant that your debt had quadrupled. And how did it feel to be there beside the Hume Highway in the rain, cheering on Cliffy Young as he made his way to the finish line of the Sydney-Melbourne Ultramarathon in 1983; or on the shores of Sydney Harbour on 26 January 1988, watching the ships come in? How, as historians, do we tell a few yarns that contribute to a larger story, and in a way that will make a reader want to stick around?

IHM: Which resources did you find most helpful in the course of your research?
Frank: The 1980s was the last great decade of the print media, and I – as well as my research assistant, Megan Kelly – spent a vast amount of time in front of microfilm readers. The National Library’s Australian Newspapers Online is wonderful but for the 1980s, you won’t get terribly far relying on digitised sources. That said, my heartfelt thanks whoever it was who put the Canberra Times on Trove up to 1995, because it served as a useful source of material for some things and a springboard for others.

The social researcher Hugh Mackay’s regular reports on various topics – everything from food and money through to attitudes to business and national identity – are a wonderful resource for social historians, containing as they do the voices of ordinary Australians.

The riches of the National Archives of Australia never fail to astonish. While most family historians will know what a wonderful social history resource it is, you might also get the impression from the Cabinet release each January that it’s all about government decision-making. But among many other treasures, the archivists tracked down for me two thick files of material in which Australians living outside the major cities wrote to the official historian of the Bicentenary, Denis O’Brien, in response to his letter to local newspapers around, telling him what they did (and how they felt) on 26 January 1988. What an extraordinary snapshot they are into Australians’ sense of identity and history at that moment.

IHM: If you could track down one thing you haven’t yet managed to find out, what would it be?
Frank: Where did Laurie Connell’s millions end up? The infamous Western Australian banker lived a lavish lifestyle, but the merchant bank that he controlled – Rothwells – lost such a vast sum that its cash can’t all have gone into keeping him in race-horses and the like! I suspect there are still many stories about the 1980s entrepreneurs to be uncovered – who, especially among our politicians, got invitations to Kerry Packer’s famous summer parties at Palm Beach? That might be a useful perspective on how power operated in Australia of the 1980s. I presume there are plenty of people around who know but I’m not one of them!