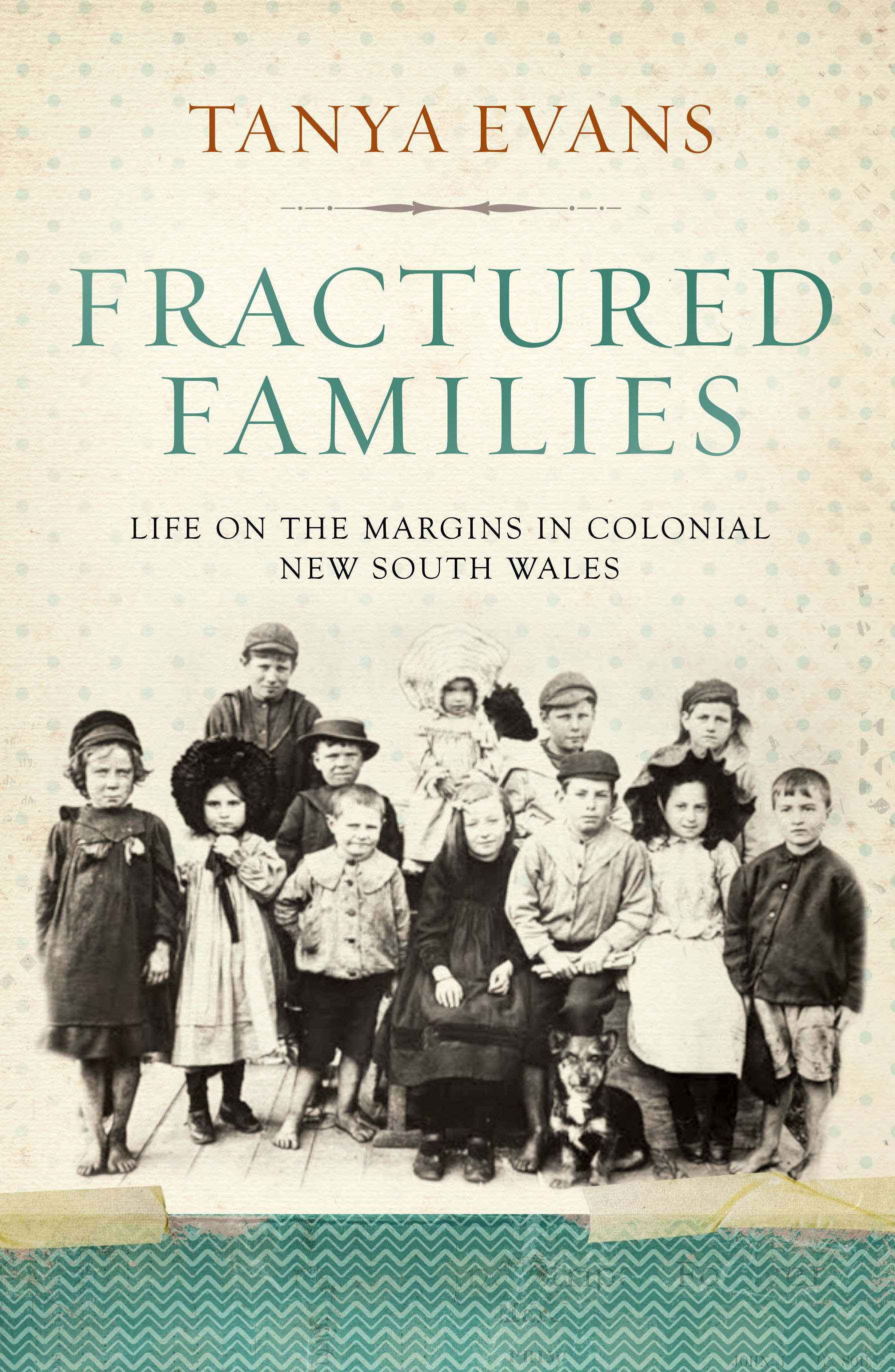 Researching the histories of the disadvantaged is more challenging than researching the fortunate, Dr Tanya Evans tells Sarah Trevor – but also more fascinating. In this extended interview, Tanya tells us more about her new book, Fractured Families: Life on the Margins in Colonial New South Wales (NewSouth).

IHM: What inspired you to start researching and writing about the everyday lives of the desperate and disadvantaged in colonial New South Wales?
Tanya: I have always been interested in the history of poverty and people who lived on the margins of society. I have written two books on the history of illegitimacy in 18th- and 20th-century England. I find the poor’s life stories much more interesting than those of the rich.

I also think that the poor and the dispossessed need all the historians they can get. It is important that we try to understand the long history of poverty and the complex ways in which structural disadvantage continues despite welfare, political and social reform since the 19th century.

IHM: What were some of the challenges involved in pursuing this topic, as opposed to the lives of the ‘rich and famous’?
Tanya: It is much harder to pull together sources on the lives of the poor. I love the detective work involved in piecing together fragmentary evidence in order to reveal the life-stories of the most desperate people in the past. The book discusses the different legacies left by the rich and poor, by ‘extraordinary’ and ‘ordinary’ Australians. People with resources often thought long and hard about how they would be memorialised beyond their death. Historians need to reveal this process because it makes an important impact on the sorts of stories that can be told about past lives.

Researching the lives of poor Australians involves working our way through convict, charitable and other records; the records of governmental organisations and charities rather than memoirs and letters.

We need to think carefully about how and why these records have survived and what stories they allow us to tell about the past.

IHM: Could you tell us more about how you collaborated with family historians to research and write this book?
Tanya: It seemed important to me that the major client group of the Benevolent Society since its establishment – lone mothers and their children – some of the most-disadvantaged members of Australian society since settlement, should contribute, in some way, to the Society’s history.

My research was driven by a desire to bring together the work of family historians, recovering the histories of their poor ancestors, with academic research on the history of the organisation and the wider historical context of this particular nineteenth-century charity.

It became clear that thousands of descendants of women who gave birth at the Benevolent Asylum during the 19th century have searched their family trees to learn more about their ‘illegitimate’ ancestors.

Before the 1970s, these ancestors would have been buried and forgotten. I wanted to discover more about the fractured family lives of these people and why their histories were being revealed to us now.

Towards the end of July 2011 the Benevolent Society sent a letter to those people who had requested permission to access their records at the Mitchell Library, inviting them to contact the Society to share their family histories and to talk about the reasons for their research into the Society’s records. Just over 80 letters were sent to those people who had requested access to the records during the period 2004 to 2011. Most went to descendants of people making use of the Benevolent Asylum in the 19th century and we received a number of family histories in response.

My work has been mostly dependent, however, on the extremely generous contribution of Martyn Killion and Heather Garnsey. Many of your readers will know that Garnsey is Executive Officer of the Society of Australian Genealogists and Killion is well known in Australia’s genealogical community. Over 15 years ago they became aware of the exceptional richness of The Benevolent Society records for researchers working on the histories of fractured families in colonial Australia. The archives of The Benevolent Society provide rare detail of the circumstances of the very poorest and often most fractured of New South Wales families.

Killion and Garnsey were conscious of how hard it was for genealogists to discover details about families with absent fathers so they could recreate the family trees of ‘illegitimate’ ancestors. From their own practice as family historians they were also well aware of the value of indexes for facilitating genealogical research.

So, over the course of 13 years, in their spare time and while holding down full-time jobs, Garnsey and Killion created and made publicly available a database of the admissions and discharge registers and an accumulation of detailed case studies of the Benevolent Asylum from 1857 to 1900. They continue to aid thousands of descendants hoping to learn more about their ancestors who used the services of The Benevolent Society. Garnsey and Killion hope that one day they might be able to provide an index to the earlier records of The Benevolent Society to assist more researchers in their endeavours.

Following my discovery of this resource and subsequent conversations with Killion and Garnsey, they offered to circulate my request for family histories to people who had accessed their site. Hundreds of family historians were contacted by this means. So Killion and Garnsey were crucial to this family history project and I benefited from their networks of knowledge and information. This book has emerged not only from these responses but from other connections made after I have presented my academic research to public audiences, Internet responses – especially rootsweb – and when people have contacted me when they have read my work online. I also work as a consultant for the Australian series of Who Do You Think You Are? and this experience has informed my research and writing.

IHM: Which resources did you find most helpful in the course of your research?
Tanya: Most historians would answer this question by referring to archival sources, library collections or personal papers but actually what I loved most about this project was my collaboration with family historians – with real people! I found conversations and email communication most helpful. These took place in person but also digitally.

One of the things that fascinate me most about family historians is their generosity of spirit, the ways in which they share data and their capacity to communicate the details of their research using a variety of different media.

I found the contacts made through rootsweb very helpful and the value of this resource was made clear to me by a researcher on Who Do You Think You Are?. I have benefitted from a wealth of knowledge in people’s minds. If different communities share resources and knowledge we can hopefully create a more useful resource for others.