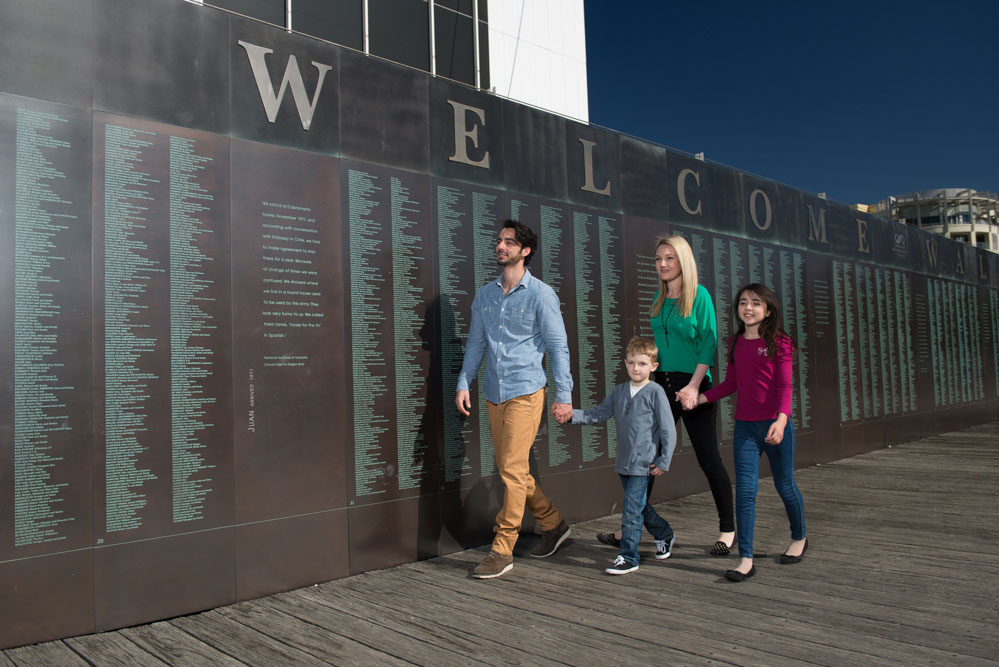 The Australian National Maritime Museum in Sydney is honouring our migration history – learn how you can commemorate migrants in your own family, past or present.

From colonial-era free settlers to Chinese miners during the gold rush; from ‘Ghan’ cameleers to post-World War II migrants and refugees: Australia has long been enriched by successive waves of immigration.

The Welcome Wall at the Australian National Maritime Museum stands in tribute to these families. As a multicultural nation with one in four of Australia’s 23 million people born outside Australia, the Welcome Wall is a celebration of diversity. It allows today’s Australians to pay tribute to migrant forebears, family members and friends by having their names inscribed on it.

The National Maritime Museum also unveils new names on the Welcome Wall twice a year. The next unveiling ceremony will be held on 6 December to commemorate the new registered names for the 73rd panel.

The special ceremony is open to the public and attracts over 700 people with previous guest speakers such as Luke Nguyen, a Vietnamese Australian chef and television host and Simon Colosimo, a retired professional footballer and former Socceroo player.

Scroll down to read a case study of a current registrant to be unveiled in the upcoming ceremony.

How to register a name on the Welcome Wall
You can register to have a migrant in your family included on the Welcome Wall with as little as the person’s name and country of origin. Once you have registered you can also include a 100-word migration story along with arrival and personal details. This will appear on the Virtual Wall leaving a lasting record for families and future generations to view.

Leave a lasting legacy this festive season and register a family name for $150 to receive a gift pack valued at over $100.

For further information on the Welcome Wall or to register a name, phone (02) 9298 3667 or click here for more information.

Case Study: The Pittorino family
For centuries, the island of Salina – part of Sicily’s Aeolian Archipelago – was famed for its malvasia, a sweet wine popular throughout Europe. In 1890, an army of phylloxera (a type of plant louse) devastated over 90 per cent of Salina’s vineyards. Destitution followed.

Unable to support their families, many chose to send their children in search of a better life elsewhere. Bartolomeo Pittorino was the eldest of five children and only 15 years old when his family sent him to Australia. He sailed to Naples then to London, where he boarded the Orotava, arriving in Sydney on 10 December 1897. A year later his 14-year-old brother Giuseppe followed.

Both brothers undertook the arduous, three-month long journey to Australia in the hope of finding work and making enough money to be able to live comfortably – a dream that was not achievable in their homeland.

Giuseppe started working for his uncle who owned a fruit shop in North Sydney. He worked 18-hour days, slept on a stretcher, and had a wooden box as a dressing table.

In 1902, when Giuseppe was only 17, the brothers opened their first fruit shop in Marrickville, using a horse and cart to go to the markets. They worked hard and prospered quickly, eventually buying land at Ramsgate and building three shops and other dwellings on the property.

When Giuseppe was older he sailed back to Salina and met Anna Costa. One of nine children, she was a dressmaking teacher and a devout Catholic. He asked for her hand in marriage, but she refused. He made two more trips back to ask for her hand and on the third trip she finally accepted. They married on 18 April 1920.

Their first child, Irene, was born in January 1921 on Salina. She was a sickly baby and so, when Anna fell pregnant again, they decided to sail to Australia so their second child could be born with good medical assistance. Sadly they had to leave baby Irene behind with her grandparents, as she was not well enough to travel, planning to bring her to Australia when she was stronger.