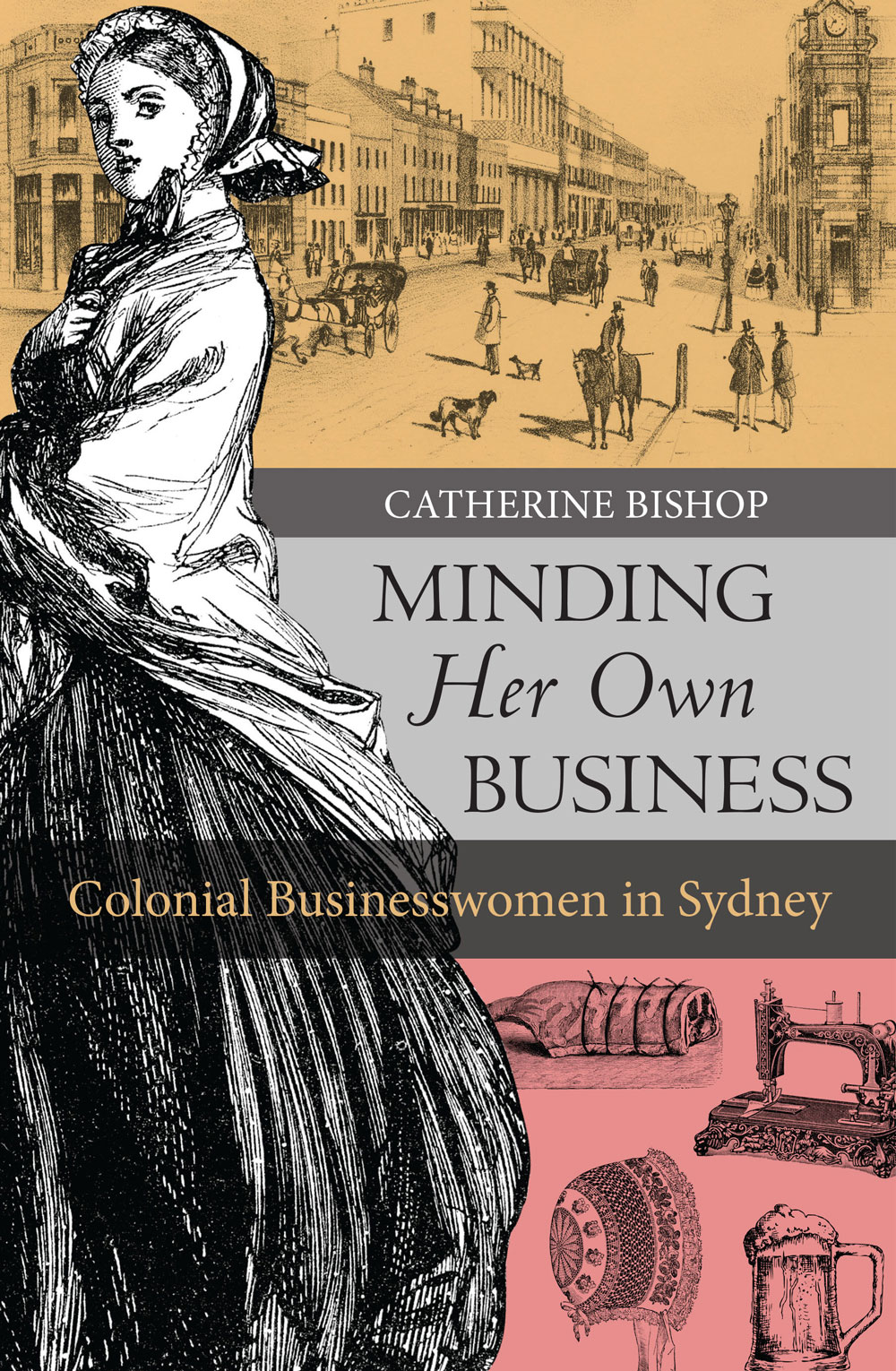 Though tricky to trace in the historical record, the businesswomen of colonial Sydney led fruitful and fascinating lives, as historian Catherine Bishop – author of Minding Her Own Business: Colonial Businesswomen in Sydney – tells Sarah Trevor.

IHM: What inspired you to research colonial businesswomen in Sydney?
Catherine: They kept inconveniently popping up! I was doing a PhD and trying to establish why and how women had apparently disappeared into domesticity especially after 1830 in Australia. But then, as I started looking in the newspapers and trade directories, I realised that while a lot of women were domestic servants and getting married and having children, and while there weren’t a lot of ‘career’ opportunities as we might think of them, women were running small businesses – and a terrific variety of them as well!

IHM: What were some of the challenges involved in pursuing this topic?
Catherine: Sources: Finding anything out about the personal motivations of these women was almost impossible – these were busy working tradeswomen, without time to write diaries and letters, and even if they did, those letters and diaries have not necessarily been preserved in libraries and archives to the same extent as those of upper middle class women.

Then there was the frustration of not being able to identify individuals with the same name. There were several women called ‘Mrs Webb’ and ‘Mary Webb’ in Sydney in the 1850s all involved in needlework businesses, and I couldn’t manage to separate who was who.

Even women with more unusual names proved difficult to find. The deliciously named ‘Blessington Flood’ appears in Mudgee in the early 1850s but I can’t find records of marriage or immigration before that.

Until we had Trove and online databases and archives and catalogues it was very difficult to trace women across time and space – especially because they changed their name when they got married. So historians in the 1970s, ’80s and ’90s were certainly aware that there were some women in business but it was difficult to discover how long-lived were the businesses and what sort of women were running them. So they naturally underestimated the extent of female involvement in the commercial life of Sydney.

Instead, feminist historians have (quite rightly) been concerned to emphasise the importance of 19th-century women’s roles as wives and mothers and household managers, showing that they made very important unacknowledged contributions to family economies.

But with the digital archive I have been able to trace more women over a longer period of time – making links between businesswomen that were pretty impossible to make before. So I could find out that, for instance, milliner Augusta Baldwin of London who emigrated in the 1840s was the same as milliner Mrs Fayers in George Street in 1850 and then was the real businesswoman behind her new husband ‘William Bynon, milliner’ in 1855. She was then the ‘Mrs John Walker’, who emigrated back to England and relative prosperity in Kensington – her third husband was a clockmaker, and it seems that Augusta no longer needed to make hats for a living.

IHM: Would you say there were changes over time in the sorts of challenges, opportunities and attitudes surrounding women in business?
Catherine: Absolutely – quite apart from the economic ups and downs, there were also legal issues. These applied particularly to married women. Until the Married Women’s Property Acts, that began to be passed in the late 1870s, wives in NSW were subject to the law of coverture – this meant they were considered to be legally part of their husband (under his ‘cover’) Essentially this meant that a woman’s business – all her profits, and her debts – were her husband’s. She could not go to court and chase a creditor (or be chased by one) unless her husband went too.

This was fine if she had a good husband. She was regarded as his agent in her dealings and she could carry on a business. But, if the husband became insolvent, his creditors could come and take the profits of the wife’s business as payment; if a husband deserted his wife, she could not go to court by herself to claim money from debtors. And he could turn up at any time and take all her money. This situation was seen as such a problem that in 1858 there was an amendment to the Deserted Wives Act that meant that deserted wives could go to court and get a court order that meant that their earnings were protected from their errant husbands. But this didn’t help women whose husbands were just intemperate or basically useless but stuck around!

Attitudes towards businesswomen are harder to assess. There was always this sense among upper middle classes and therefore in the newspaper editorials that middle class women should be doyennes of domesticity. But, on the other hand, women’s businesses were patronised, and women in business were respected for their business sense; there is the occasional complimentary comment in a letter or in the newspaper. Importantly, widows were expected to step up to the plate and take over responsibility for their children’s support – often the public appeals for help for a widow in the newspapers were so she could set up a small business to support her family.

Female publicans were an interesting anomaly. They were accepted far more readily at the beginning of the century but by the 1870s and 1880s, I think as the temperance movement grew in strength, there was increasing opposition to licensing women as publicans.

IHM: Of all the enterprises that women ran in colonial Sydney, which took you most by surprise?
Catherine: The fact that women seemed to be accepted in what might be considered male occupations. The best evidence for this was the case of Elizabeth Gold. She took over her husband’s plumbing business when he died and was awarded contracts by the City of Sydney in the 1830s. I don’t think she did any actual plumbing (although she may have done!) but the fact that she owned and managed the business didn’t seem to worry the City of Sydney.

The other great image was of Rita Macnamara, who was not only a butcher but a carcass butcher in the 1860s, and according to one observer wielded the meat cleaver like a toy! Such physicality is not usually associated with 19th century women in our imaginations.

IHM: Were there any information or personal stories you uncovered that stopped you in your tracks, or touched you personally?

Catherine: The fact that one woman’s business closed down a few short months after the death of her child – tragic. The way in which conwoman Cora Anna Weekes managed to charm the socks off men from San Francisco to Sydney and take their money!

Eliza Cordelia Tighe, who left her one-month-old daughter in London with a neighbour when she emigrated to Sydney. Letters and money from Sydney ceased after a few years. As an adult the daughter went to Canada and descendants there still talk about ‘a long lost mother in Woolloomooloo’. The wonder of the internet has meant that the two branches of the family have reconnected!

Also, finding out that my office at the Australian Catholic University was in a building that was for a short time the boarding house owned by one of my scandalous businesswomen – I love to think that I am walking the same corridors!

IHM: Which resources did you find most helpful in the course of your research?
Catherine: Trove, Trove, Trove. I basically did much of my research from my living room – not only on Trove but also on the numerous family history websites. The other great sources were the family historians who shared information and pictures and such great enthusiasm. It was so exciting to be able to share all these stories with people who are equally as thrilled by them. Historical research can be quite isolating but this project wasn’t!

IHM: If you could track down one thing you haven’t yet managed to find out, what would it be?
Catherine: What happened to Cora Anna Weekes? Who was Harriet Corston’s business partner, Mrs Phipps? How many of these women actually wanted to be in business and enjoyed their work, and how many were doing it because they had mouths to feed?

IHM: What would be your top tips for family historians who want to learn more about their ancestors’ business ventures?
Catherine: Trove, insolvency records (state records), bank account records (still not digitised but in those wonderfully brown dusty ledgers in inaccessible archives!), and the serendipitous mentions in other people’s letters or memoirs or in the columns written by ‘Old Chum’ in Truth at the turn of the 20th century.

Minding Her Own Business: Colonial Businesswomen in Sydney (NewSouth, $39.99) is out now. Click here for more information.

This is an extended version of a story that originally appeared in issue 31 of Inside History.