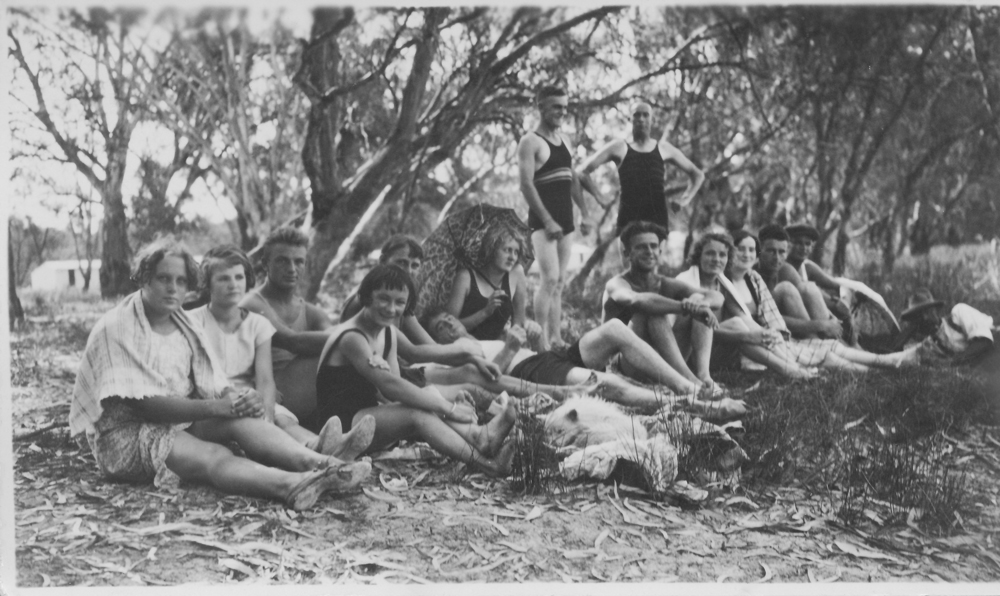 One hundred and one years ago today, the foundation stone was laid at Lock 1 in Blanchetown, South Australia – the first step in a wildly ambitious engineering project that set out to harness the mighty River Murray by building locks and weirs. Life in these lock-building communities, such a crucial part of our Murray River history, could be challenging. In this excerpt from our May-June 2016 issue, historian and author Helen Stagg reveals the community spirit of life on these lock-building settlements.

Lock and weir construction resulting from The River Murray Agreement Act 1915 ensured reliable supplies of water for irrigation and navigation, with weirs regulating flow and locks allowing navigation at the weir sites.

These ‘lockworks’ involved large cohorts of men transporting themselves and their families to remote regional locations where they built small, relatively self-sufficient communities on the riverbank for the duration of the works before literally ‘pulling up stumps’ and relocating to the next site to begin the entire process again.

My grandfather, Arthur Rains, a steam-engine driver, was one of these men, and when I was growing up, I often heard my mother Evelyn’s vivid memories of her childhood ‘on the locks’.

During my Master of History from the University of New England which I completed in 2010, I began investigating this little-known history.

My studies gave me the skills and the impetus to research and write a book, launched in June 2015, to mark the centenary of the foundation stone for Lock 1 at Blanchetown in South Australia. Harnessing the River Murray: stories of the people who built Locks 1 to 9, 1915-1935 depicts the lives of the workforce and of the women and families whose itinerant lifestyle led to them being referred to as ‘the great wandering class.’

These are the ordinary people, and the book’s particular focus is on the children, the women and the labourers from the small town-camps at Locks 1 to 9. (Locks 10, 11, 15, 26 and the Yarrawonga weir were the responsibility of either Victoria or New South Wales with the initially planned in-between numbered locks never being built.)

As well as detailing the tough and dangerous working conditions and the many accidents which occurred, the narrative ventures deeper into the homes of the people, investigating the fabric of life and how the community supported each other through the good and the bad times. Over the 20-year construction period of Locks 1 to 9, the nature of the work and the long hours proved no deterrent to the seemingly constant cycle of social and sporting events including regular dances and movie nights, gala balls, aquatic carnivals, horse races, football, cricket, tennis and soccer competitions.

Life on the locks
Arthur Rains and his wife Florence moved to Lock 5 at Paringa in South Australia at the completion of Lock 1 in about 1922 with their five children: Evelyn, Leslie, Sidney, Walter and Gladys.

Renmark local historian Heather Everingham alerted me to some letters written by the Rains children to the Murray Pioneer newspaper in 1925–26. This led me to discover a total of 71 letters that the children penned for the ‘Young Folks Column’ while they were living at Lock 5. The children wrote so prolifically that the columnist ‘Mopoke’ stated in January 1926: ‘I must congratulate the Rains children on their steady flow of letters.’

In addition to precious vignettes of daily life, the letters reveal details of the works themselves. For example, on 27 March 1925, Walter wrote:

There are 160 men working here; they work on shifts. They start about quarter to four o’clock in the morning and work until half past 12. Another shift goes on then until twenty minutes to nine at night. If they have a box full of cement left, sometimes they have to work until after midnight: it is a busy site. There will be two coffer dams. They have half the lock wall finished and about three parts of the foundation.

Each camp consisted of a variety of dwellings, laid out in rough streets. Max Pearson recalled: “The government provided some housing. They were very, very rough, just wood and iron, but at least they didn’t leak, or not much anyhow … they were very primitive in many ways.” Evelyn Smith (née Rains) described how the men built on extensions for their family: “Dad had to always build another room or two, usually from flour bags which had to be cut open, and then stitched together.”

The corrugated iron houses formed an area referred to as ‘Tin Town’ while ‘Bag Town’ — a shanty-town on the riverbank — was where others built their homes from whatever materials were at hand.

The enterprising communities, in most cases far removed from established towns, depended largely on produce from their vegetable gardens. They also obtained supplies from visiting paddle steamers, the government ‘store’ and a small shop at each site. Some had cows, goats and chooks and they supplemented their food supplies with fish, ducks, rabbits, bush honey and mushrooms.

An enduring legacy
These lock workers married, raised families and bonded not only with each other but with the river, always a constant part of their lives. At the completion of Locks 7 and 8, many of them moved on to build the barrages at Goolwa near the Murray Mouth.

Max Pearson recalled the shock of his first sight of the ocean, as a body of water with no bank on the other side — an inconceivable concept to people whose entire lives had been on the banks of the Murray. He also described his heartfelt affinity with the river:

Read the full story in the May-June 2016 issue of Inside History magazine. Harnessing the River Murray: Stories of the People who built Locks 1 to 9, 1915-1935 is available for order.