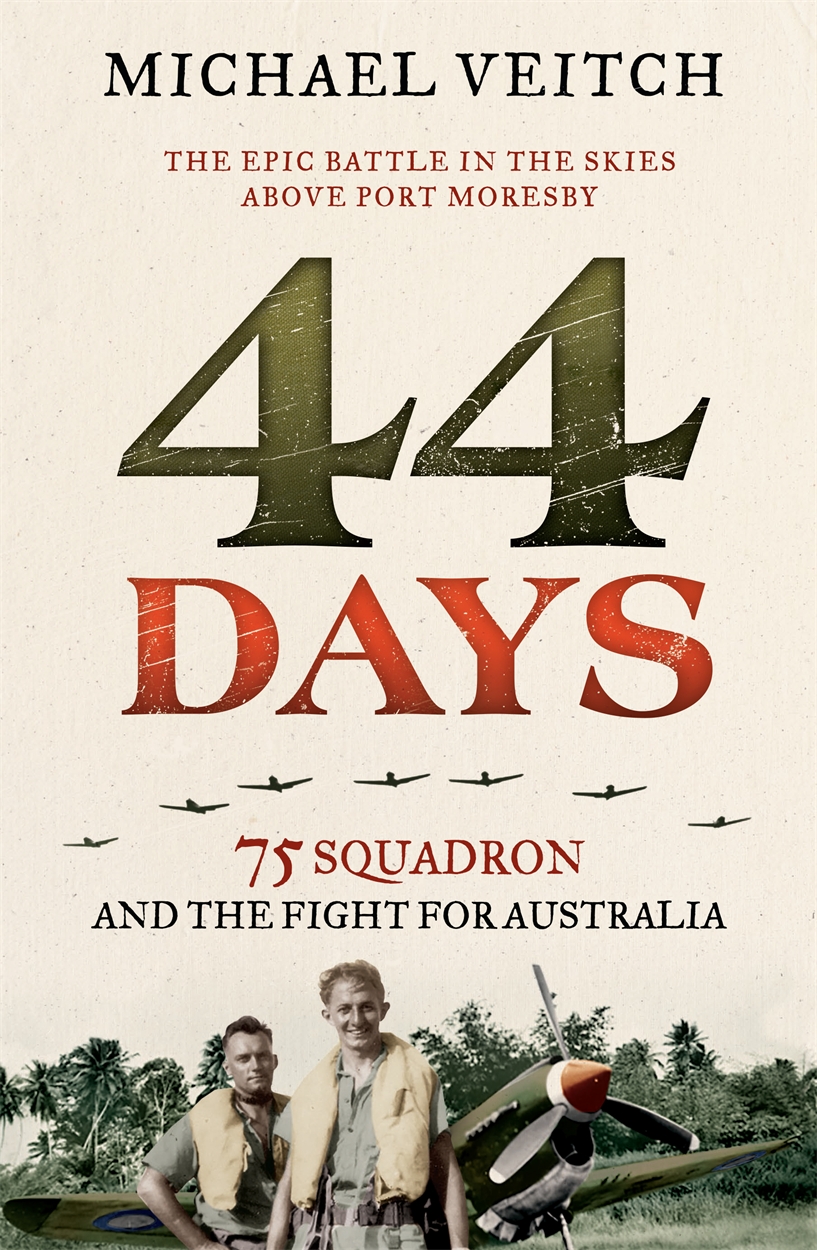 IHM: What inspired you to start researching the RAAF 75 Squadron for your book 44 Days?
Michael: It’s a strange story, but in fact the son of one of the original pilots of the whole 44 Days story approached me first — at an RSL in Victoria where I was giving a talk — enquiring if I’d be interested in doing a book on the subject of 75’s fight at Port Moresby. This was Peter Tucker, son of Arthur Tucker, one of 75 Squadron’s earliest pilots.

At the time I actually turned Peter down as I was too busy but then — totally out of the blue, Hachette approached me with exactly the same proposal. I thought that Peter must have been in touch with Hachette, but no, it was just coincidence.

IHM: Which resources did you find most helpful?
Michael: The Australians at War website, I ended up using a great deal. I’m familiar with it and it’s a vast trove of ridiculously specialised and esoteric knowledge, down to the history of individual units and their personalities. Pacific Victory Roll was also a good one, again very well researched information about the pilots of the Pacific conflict.

My (well it’s not mine, but by the end I thought it felt like mine) wonderful State Library of Victoria was a fantastic place to do much of the research and writing of the book.

IHM: What resources did you come across when researching your book that haven’t been widely used by others?
Michael: The State Library of Victoria contained the only copy I could find of Fighter Squadron Doctor, a self-published autobiographical account of the 44 days and beyond by Doctor William Deane-Butcher, 75 Squadron’s Medical Officer in New Guinea, and one of the true heroes of the saga. His insights, stories and nuanced sensitivities of the 44 Days battle proved invaluable.

I was also able to obtain, at the State Library, a specially marked copy of Samurai! by one Saburo Sakai, a Japanese ace flying from Lae against the Australians, and still the only written account of the battle from the Japanese point of view. Again, essential to my research.

IHM: Was there any information you uncovered that stopped you in your tracks?
Michael: The stupidity of senior Australian Air Force officers in ordering a change of tactics to the Kittyhawk pilots of 75 Squadron, now insisting they dogfight the superior Zero fighters directly remains beyond the realm of belief, and led almost immediately to the death of 75’s revered leader, John Jackson.

The fact that this piece of Australian military history is virtually unknown still astounds me.

IHM: Is there any part to the story that you would still love to unearth?
Michael: More accounts of the Japanese, and also more details of the fateful final sortie of John Jackson.

IHM: What’s your best tip for people wanting to write a history book of their own?
Michael: Start writing.

IHM: How did you go about bringing the characters and stories to life?
Michael: I was helped by the fact that many of the pilots left detailed recorded interviews with the Australian War Memorial in the 1980s. Listening to the men talk about the 44 days brought it to life for me.

IHM: How do you know when you’ve written a good book?
Michael: Wait for the reviews.

44 Days: 75 Squadron and the Fight for Australia by Michael Veitch (Hachette Australia, $32.99) is out now.