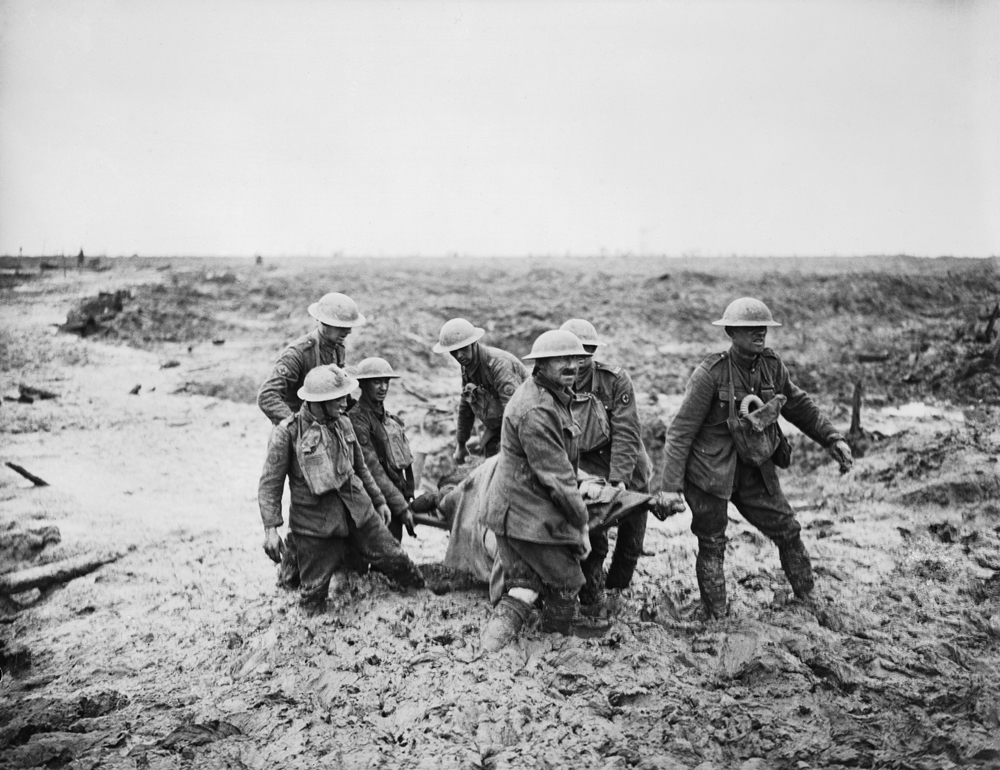 The wounded were accommodated in 1,300 marquees (10 patients per tent) and 60 huts (20 per hut), giving a total capacity of 14,200 casualties in ‘normal’ circumstances and 20,000 in an emergency. Total casualties at the end of the first two days of Third Ypres were 23,000, so the facilities were instantly pressed to the limit.

From the clearing stations, those with ‘Blighty’ wounds — which warranted rest and/or hospitalisation at home — were entrained to base hospitals in northern France, and then by hospital ship back to Britain.

The German wounded who couldn’t walk were similarly borne home, but theirs was a less jarring experience because the Germans were not attacking over a plain of mud and shell craters. Like their Allied counterparts, the German medical teams performed phenomenal feats on the Western Front, each month treating about 175,000 wounded at field hospitals, 66,600 at evacuation hospitals and 86,300 at base hospitals, most of whom suffered battle wounds caused by artillery and shrapnel. Of Germany’s 25,000 doctors, about 70 per cent worked in war-related facilities.

Doctors and nurses worked with ceaseless dedication in ghastly circumstances. During the worst periods, the British casualty stations and their German equivalents resembled charnel houses, the air heavy with the cries of the wounded and the smell of death, the floor a slick of blood and gore, the scenes heart-rending.

‘I often wondered,’ said Nurse Vera Brittain, a VAD, in August 1917, ‘how we were able to drink tea and eat cake in the operating theatre, in the foetid stench, with the thermometer about 96 degrees in the shade and the saturated dressings, and yet more gruesome human remains heaped on the floor.’

The conditions were primitive. Remy Siding clearing station was erected in a field of shell holes, on grass, which became mud, recalled Sister J Calder: ‘Matron fell into a shell-hole one night. . . She’d been in it an hour and she’d just managed to prevent herself from being drowned. . .’

The great battles of 1917 presented doctors with an array of medical conditions on an unprecedented scale: gaping flesh and head wounds, trench fever, trench foot, wound shock and shell shock. They offered an ‘unrivalled opportunity’, wrote one, to ‘try-out’ methods which ‘experiment had shown worthy of further exploitation. . .’

Nothing could prepare them for the kinds of wounds the new howitzers inflicted on human flesh. Norman Collins, blown up and then buried alive, regained consciousness in a field dressing station where all around him, under the corrugated iron, lay ‘chaps with. . . their brains practically hanging out’. Later, in a French hospital, he saw more of the ‘real’ wounded: soldiers who had been disembowelled, scalped or castrated, and others with ghastly facial wounds.

The hospitals were crowded with the chronic cases and the psychologically ruined. ‘Kill me! Kill me!’ was a familiar scream from a man who had just heard he’d never see, hear or make love again.

Passchendaele: Requiem for Doomed Youth by Paul Ham (Random House, $45.00) is out on 3 October.