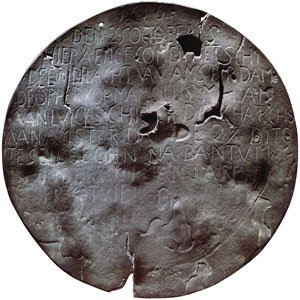 Today marks the 400th anniversary of one of the earliest European landfalls on the Western Australian coastline. On 25 October 1616, Dutch sea captain and explorer Dirk Hartog landed on Cape Inscription, on what is now known as Dirk Hartog Island in Shark Bay, Western Australia, aboard the Dutch East India Company ship the Eendracht.

This was the second known Dutch contact with Australia after the 1606 voyage of the Duyfken, but Hartog’s landing is significant because of the evidence he left behind: a flattened pewter dish engraved with an inscription describing his visit, nailed to an oak post on Dirk Hartog Island.

This marked the oldest known evidence of European contact with Australia.

1616 THE 25 OCTOBER IS HERE ARRIVED THE SHIP EENDRAGHT OF AMSTERDAM THE UPPERMERCHANT GILLIS MIEBAIS OF LIEGE SKIPPER DIRCK HATICHS OF AMSTERDAM. THE 27 DITTO (we) SET SAIL FOR BANTAM THE UNDERMERCHANT JAN STINS, THE FIRST MATE PIETER DOOKES VAN BIL. ANNO 1616