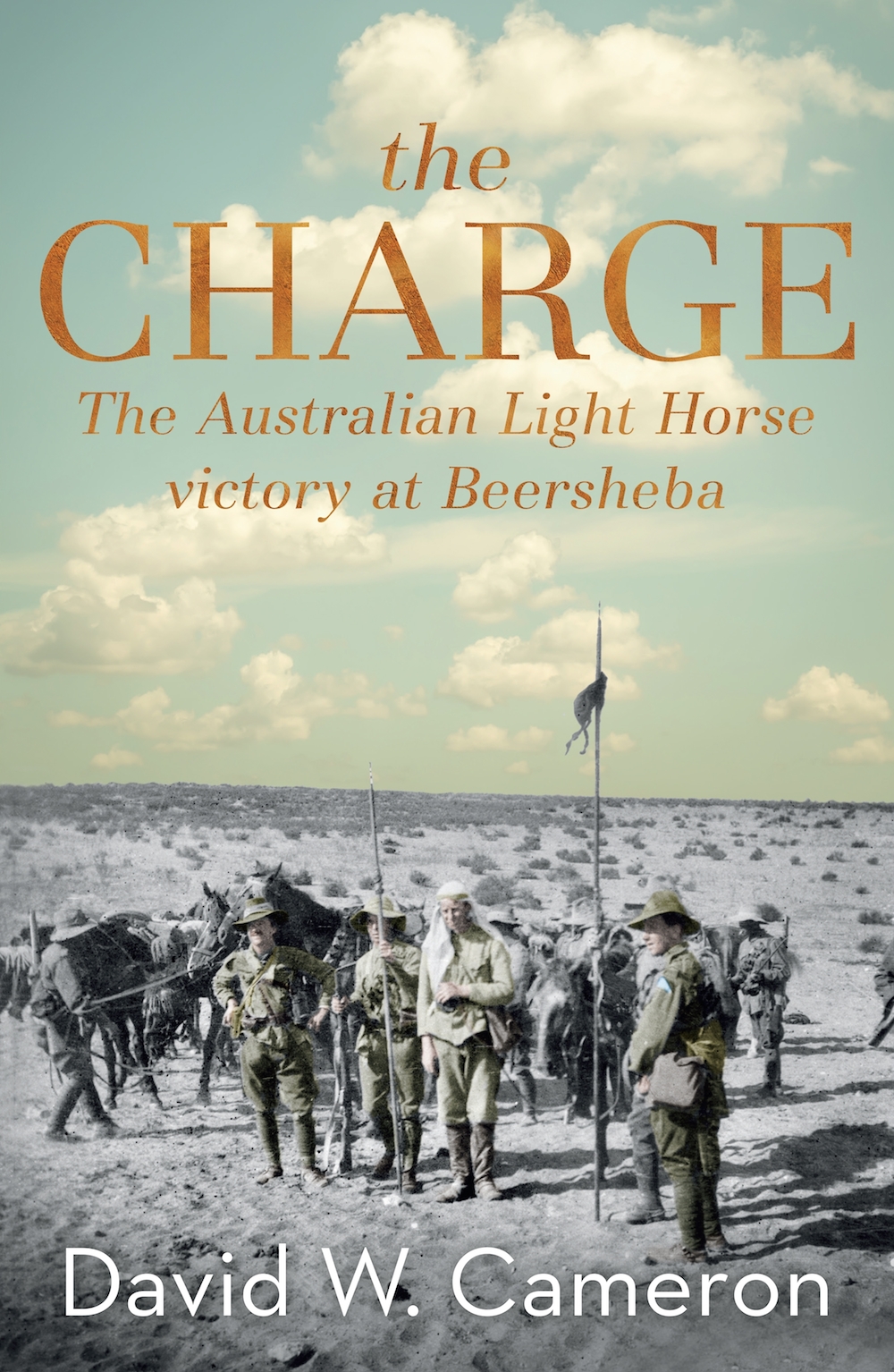 IH: What initially drew you to Australian military history?

David: I have always been interested in history generally, but as an archaeologist working in Turkey I visited Gallipoli for the first time (1992) and was completely captivated by the landscape and began reading about what happened there. I started my second PhD (part time) on the ‘Archaeology of 400 Plateau’ (which includes Lone Pine). I was involved in trying to stop the road works in 2004 and when this failed I gave up on the thesis (I was too distraught to see what was happening to the battlefield in terms of conservation and preservation or the lack thereof) and turned to writing a number of narratives on the campaign and specific battles there including The Battle for Lone Pine. Since then I started to read more broadly about Australian military history and have since completed a book on the Battle for Long Tan, and The Charge. I’m currently completing two books on the Australians in 1918.

IH: Your new book, The Charge, explores the Australian Light Horse victory at Beersheba. Could you tell us a bit more about both Beersheba, and the Middle Eastern theatre more generally, and the role they played in the overall war?

David: Anzac and British forces after being evacuated from the failed Gallipoli campaign in late December 1915 and early January 1916 turned their attention to the capture of Palestine and later the Trans-Jordan and greater Syria. The British Prime Minister David Lloyd George was keen to find another way of winning the war — he was far from convinced that sending men to their deaths in the mud and filth “Flanders’ fields” — being caught up on German wire while being targeted by German machineguns, gas and artillery fire was a ‘winning’ combination. So he looked at trying to bring down the then Ottoman empire in the hope that this would weaken Germany’s ability to wage war. A totally forlorn hope as the only way to defeat Germany was to do so in the main theatre of operations — the Western Front.

Even so, the ongoing victories, especially by the Australian Light Horse and New Zealand Mounted Rifles, in the Sinai and later Palestine were providing some hope to the British at a time when all along the Western front there was nothing but military disasters. As such Lloyd George rewarded success with more troops and resources to the Palestine campaign — hoping that by late 1916 Jerusalem would be captured as a ‘early Christmas present’ for the war weary British people who were starved of any military success. After two disastrous battles to break through the Gaza-Beersheba line in early to mid 1917 by attacking Gaza on the coast, the British turned their attention to the inland flank at Beersheba. Here they hoped to break through the strong Turkish defensive line and finally push into Palestine proper, in their advance to Jerusalem.

However, Beersheba was 40 kilometres inland and the only secure water source was in the town itself. If Beersheba was not taken before dark then a main part of the attacking force consisting of Anzac troopers would have no water for their horses and most would die before making it back towards their starting off point just south of Gaza. Beersheba had to be taken or the whole campaign would be a significant disaster for the British and a stunning victory for the Ottomans.

The Anzac and British victory at Beersheba on 31 October 1917, especially the charge made by the 4th Australian Light Horse Brigade which took the town just before dusk, resulted in Jerusalem being captured a month later. The way now lay open to capturing the Trans-Jordan and greater Syria which ultimately led to the collapse of the Ottoman Empire and the establishment of modern day secular Turkey.

IH: Your book tackles the misconception that the horsemen were fighting an ‘easy war’ compared to their counterparts on the Western Front. What were some of the challenges the Australian Light Horse faced?

David: In many ways the conditions experienced by the Anzac troopers was just as bad as those who were suffering on the Western Front. While conditions for those fighting in Europe was truly appalling, they at least had the ability to be withdrawn from the front and get leave in Paris, London or elsewhere. The Anzac troopers in Palestine faced their appalling conditions of heat, lack of water, dysentery, monotonous food, poisonous scorpions (and other ‘creepy crawlies’), not to mention ‘Jacko the Turk’ day in and day out — month in and month out — year in and year out. They had to conduct long patrols in appalling conditions, often going two or even three days without sleep. Even worse than the Turks was the fear of being wounded and found by the Bedouin who were not adverse from torturing wounded before stripping them of all processions and leaving them for the birds of prey to feed on.

IH: The Australian Light Horse charge was one of the last successful cavalry charges in history and often described as a bluff. Could you talk us through the strategy behind the charge?

David: It was no bluff but an effective charge. The British infantry who had captured all of their positions by noon — north and northwest of the town — had succeeded in forcing the Turkish commander in Beersheba to commit the bulk of his force to that part of the battle — leaving the eastern and southern aspects of the town weakened of defences — as hoped by the British commanders — including Australian Lieutenant General Harry Chauvel (who had been appointed to corps command one year before General John Monash would be when commanding Australian troops on the Western Front).

The Anzac troopers would swing around to the weakened defences to the east and capture Beersheba. However, these troopers were soon bogged down in a major battle to take Tel el Saba which defended this approach to Beersheba, which was still commanded by significant Turkish forces with a number of machineguns. The battle here raged for hours. Chauvel realised that this force was in no condition to capture Beersheba and committed his nearby reserve force of the 4th Australian Light Horse Brigade (led by the 4th ALH Regiment and 12th ALH Regiment) to take the town from the southeast. The only way for this to be achieved before dusk, preventing the Turks destroying the wells, was for a quick cavalry charge.

As the Australian troopers charged down from the heights southeast of Beersheba, the Turks could not believe their eyes as around 400 horsemen charged down upon them — luckily for the Australians this part of the line was not wired; if it had been, the charge would have failed. Within 30 minutes of the charge being launched the Australian troopers had captured the outer Turkish lines defending this part of the town and had captured the town and its wells themselves.

IH: Was there any information or personal stories you uncovered that stopped you in your tracks, or touched you personally?

David: There were quite a few but the two that touched me the most were:

Many Australians at home, especially those with loved ones fighting and dying in the mud and filth of the trenches of France, saw the light horsemen as having an ‘easy war’. One trooper recalled receiving a comfort package from Australia addressed to ‘a lonely soldier’. On opening it, the trooper found a short scribbled note inside that expressed the sender’s hope that the package would end up with one of the men fighting in the trenches of the Western Front and ‘not a cold-footed squib’ in Egypt or Palestine. The trooper sent back to the writer of the note a number of photographs of his mates’ graves scattered throughout Palestine.

Thirty-year-old clerk from East Malvern in Victoria, Trooper Vernon Knuckey of the 8th ALH Regiment, the next day rode through the battlefield while following up the retreating Turks:

If I live to be an old man I can never forget my first view of the battlefield. Later on I saw our own men dead and wounded, in some cases chaps that had been with me in good old Seymour days, but the impression was not so marked as this particular morning. One case in particular of two Turks, they had evidently been wounded and managed to drag themselves to the same bush, and my mind could picture a scene, what must have been acted there. One had died and his mate had pulled his waterproof sheet over the body. When we came along he too was also dead, he was resting on his left elbow and with the right hand stretched out probably to pull the sheet further over his mate and had died during the act. The man seemed simply to be resting there, his face was calm, and to make sure everything was right one of our chaps got off to see that he was really dead. I never thought a dead man could look so natural.

David: I am always fascinated to read the published battalion/regimental histories that were in many cases published soon after the war. While some are lacking detail, others are packed with interesting narratives of man and beast.

Also critical are the unit war diaries available at the Australian War Memorial and now available online. Veteran journals like Reveille are also great as contributors were writing their experiences so other veterans could read their accounts — which is a great editorial flitter because if one gilded the lily too much you will often find in the next issue an account by others who were also there telling their side of the narrative and trying to ‘put the record straight’ — real historical gold dust.

IH: What would be your top tips for researchers who want to learn more about the lesser-known battles and campaigns of World War I?

David: The first point of call is always the official histories — not saying they are always ‘correct’. From there the official unit war diaries are great at identifying anomalies identified in the official histories, especially when time lines don’t ‘add up’. Also the unit histories usually provided much more detail about which company was involved and who were the individuals commanding them — which is critical when writing a narrative as these individuals and lower echelon units should be recognised as it helps reconstruct the battle in more detail and also provides a greater understanding of the overall tactical situation. The published war diaries and personal records held at places like the Australian War Memorial are also a must read.

When I write a battle narrative I use my archaeological background to help ‘rebuild’ what I assess likely happened, which means chronology and attention to detail is critical. As an archaeologist you are usually trying to reconstruct human actions over a specific time and place (sometimes the reverse) and that is my ‘methodology’ for writing battle narratives — trying to reconstruct past human behaviour through historical records. As such I feel more comfortable writing about specific battles rather than whole campaigns as it enables me to get into the weeds of human behaviour.

If you could track down one thing you haven’t yet managed to find out, what would it be?

The Charge: The Australian Light Horse victory at Beersheba by David W. Cameron (Viking, $35.00) is out now