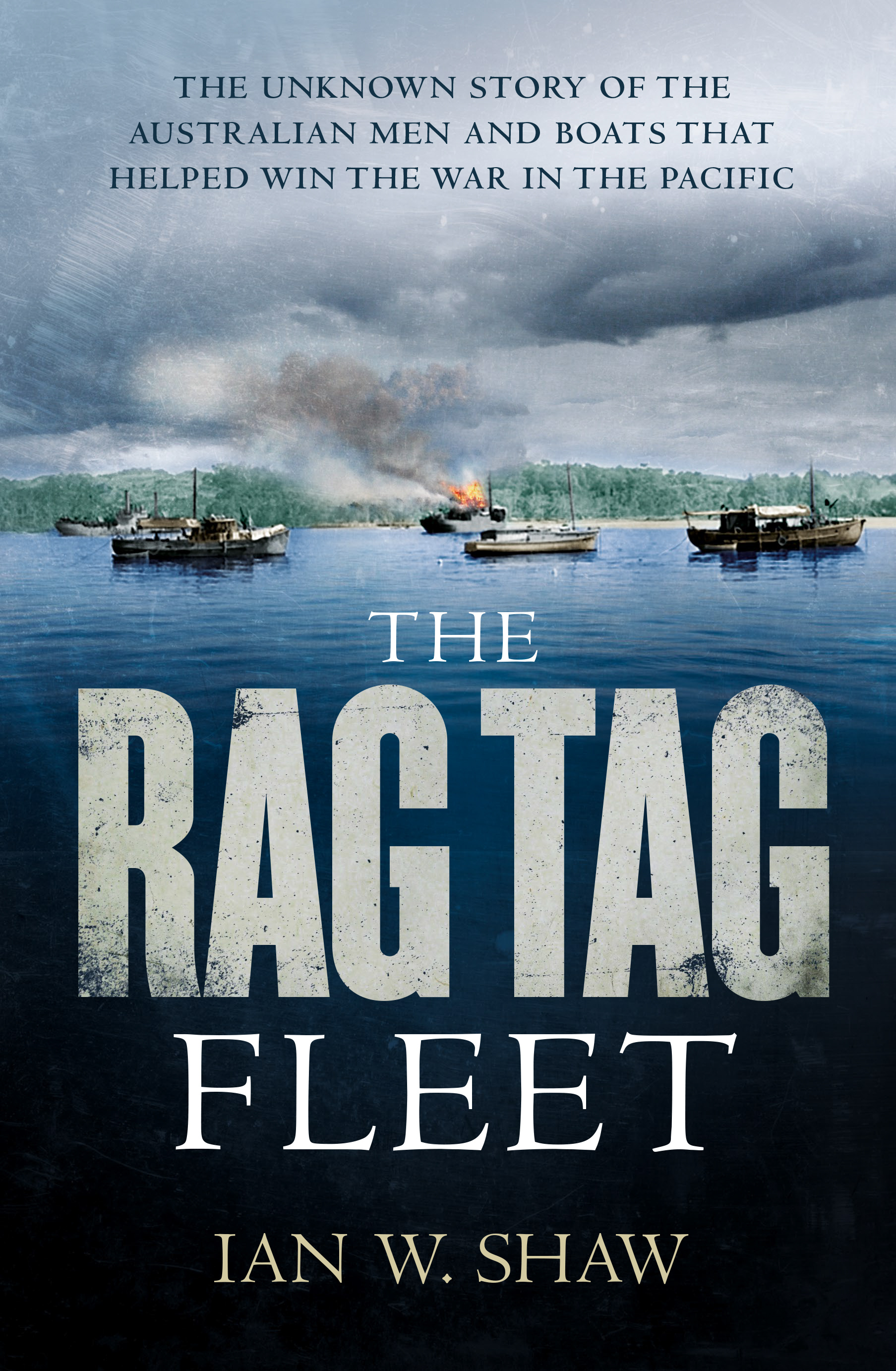 In mid-1942, amidst the Japanese domination of the Pacific, a fleet of hundreds of Australian small ships was assembled, crewed by more than 3000 Australians who were ineligible for armed service. Sailing under the American flag, they were tasked with bringing supplies and equipment to Allied troops fighting the Japanese across the South Pacific — and they helped change the course of World War II. Here, Ian Shaw, author of new book The Rag Tag Fleet, tells Sarah Trevor about this little-known motley fleet and the difficulties they faced.

IH: How did you first learn about the ‘Rag Tag Fleet’?

Ian: Matthew Kelly from Hachette sent me two articles about an exhibition at the Australian National Maritime Museum which detailed some of the beginnings of ‘Mission X’, as the program was originally named. He asked if I thought there was a full length story in the proposed mission and, after a lot of initial research, I found that there was a story that was both powerful and, moreover, had not received the attention I thought it deserved.

IH: How and why was this motley fleet of fishing boats, trawlers and schooners assembled?

Ian: After the American losses at Pearl Harbour and to a lesser extent in the Philippines, US naval assets in the Pacific were very limited. In Douglas MacArthur, they had a general who was determined to take the fight to the enemy but, to do that, he needed vessels of all shapes and sizes to carry men and materials. A small group of amateur sailor/explorers from pre-war Pacific expeditions had a proposal to use small ships to supply and resupply US forces in the Philippines. It was their idea that grew into the US Army Small Ships Section.

IH: What were some of the difficulties they faced?

Ian: The first was a shortage of ships in Australia. At the outbreak of war, all Australian shipping became subject to wartime regulations. The US Army had to firstly convince Australian shipping authorities that their needs were important for the defence of the country and that they had the wherewithal — money and experience — to build up a suitable fleet.

They had to then source the vessels they needed, and US Army requestioning teams spread across Australia from Brisbane to Hobart and across to New Zealand. One of their major assets was an Australian boat builder named Jack Savage, as he was able to inspect, assess and approve a variety of boats for a variety of purposes.

They were able to crew these vessels when the Australian government agreed that the US Army could offer employment contracts to any Australian men who were ineligible, through age or infirmity, for service with the Australian armed forces.

IH: Why do you think the story of this fleet remains relatively unknown in Australia?

Ian: Primarily because the Small Ships Section was a US Army unit. In its first two years of operation the overwhelming majority of the ships’ crews were Australian with a generous sprinkling of Englishmen and New Zealanders. They operated in support of the US Army and were therefore overlooked when the stories of Australia’s involvement in the Pacific War were written.

IH: What were some of the challenges involved in researching and writing The Rag Tag Fleet?

Ian: It was all a long time ago, and records fade and disappear with time. There were two sets of official records for the Small Ships Section. One set was sent to the United States at war’s end; there is now no trace of where they finished up. The second set was kept at the Grace Building (now the Grace Hotel) in Sydney as it had been the Section’s Headquarters for much of the war. Sometime after 1946 they were reportedly used to fuel the heating system in the building.

The surviving veterans are all now elderly gentlemen and some of those I spoke to either didn’t want to talk about their experiences or had lost the detail of their service experience.

Working through online archives can also present a unique set of challenges to those not completely at home in the digital world, i.e. me.

Ian: Two books were especially useful as basic research tools. One, The Forgotten Fleet, was published in two editions and serves as a who’s who for the ships and the sailors. The second, The Raggle Taggle Fleet, was written by one of the American founders of the section and is a good, personal story about the section’s early days. There are also a dozen or so books written by people who had first-hand experience with the section at some point in its operations.

Personal recollections, recorded both here and in the United States, were probably the most important source for what it meant to be a Small Ships sailor.

IH: Was there any information or personal stories you uncovered that stopped you in your tracks, or touched you personally?

Ian: There were many as the experience of war sears memories into a person’s consciousness. Two that I will never forget are Clarrie Dawes telling me that he joined the Small Ships after running away to sea because “I was 14 years old and I was very lonely at home”, a telling recollection almost 80 years after the event.

The second was in a book of war experiences published by the Australian war correspondent Geoffrey Reading. Standing on the bows of one of the small ships which was already ablaze from Japanese strafing he watched a Zero diving straight towards him, and he thought:

He dived deep into the tropic sea and relaxed in the quiet and calm water. When he surfaced, it was to a scene from hell. The juxtaposition was brilliant.

All the personal stories touch you, as a husband or a son or a father, because — in different circumstances — it could have been you experiencing the story rather than writing about it.

IH: What would be your top tips for anyone who wants to discover more about the lesser-known aspects of Australia’s World War II history?

Ian: Read the general war histories, then the more specific service and campaign histories and work your way down, or up, to individual stories. When something jumps out at you as being interesting, or intriguing or unusual, follow it to find the story you want to write and that others will want to read. Trust your instincts!

IH: If you could track down one thing you haven’t yet managed to find out, what would it be?

Ian: Why is it that war, which brings out the worst in man, can also bring out the most sublime of human emotions and actions?