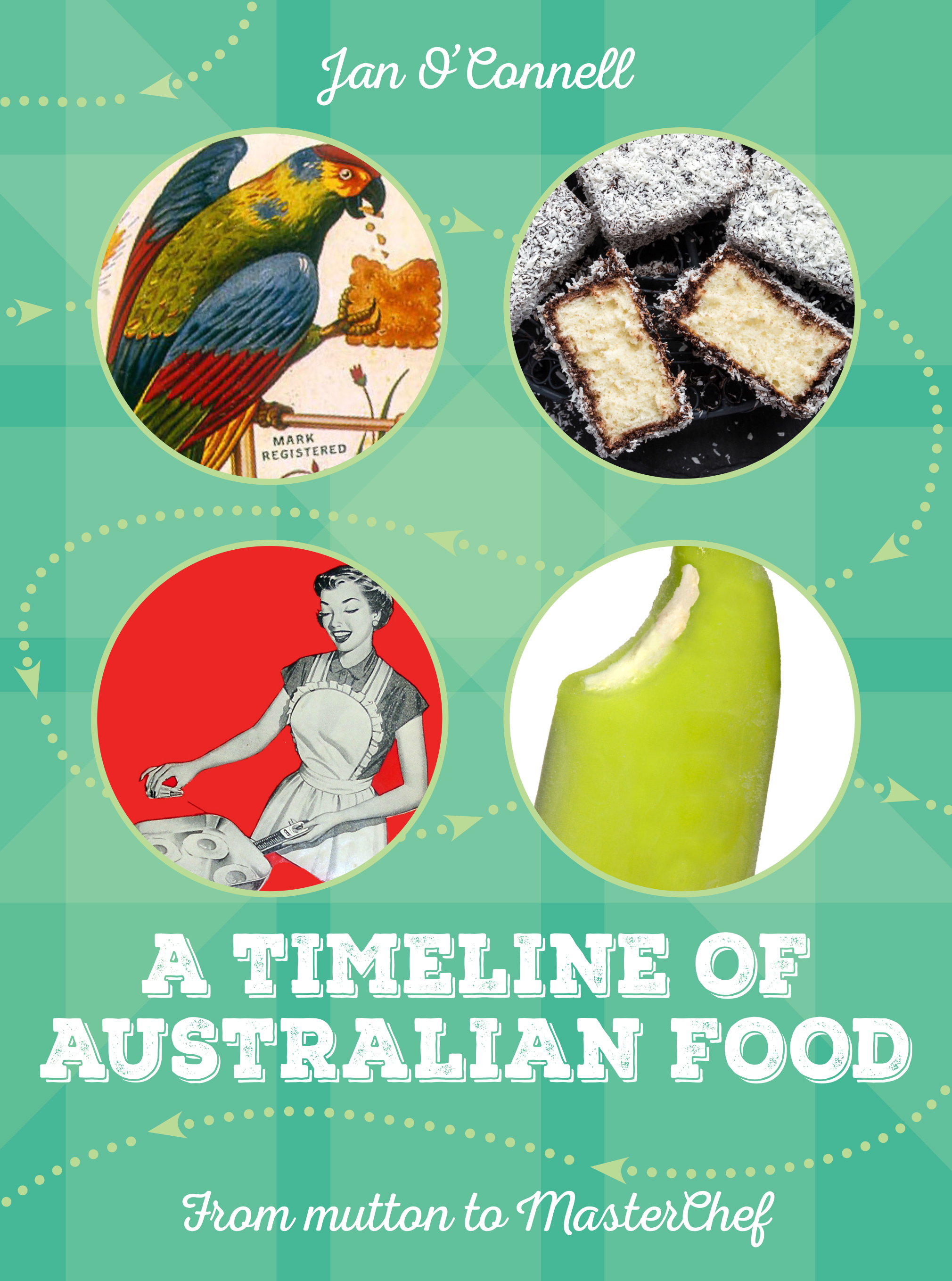 Home > Blog > Featured > A Timeline of Australian Food: From Mutton to MasterChef

Now here’s some food for thought. Ever wondered how Tim Tams got their name? Did you know Australia’s first commercial olive oil was produced in a prison? And why were revolving restaurants so popular?

Jan O’Connell wondered this and more, so set out to discover the history of food in Australia over the past 150 years. The end product is A Timeline of Australian Food: From Mutton to MasterChef. Lavishly illustrated, this tasty morsel of a book looks at what we’ve eaten, how we’ve shopped and how we’ve produced and prepared our food, decade by decade through depression, war and decades of abundance.

Jan spoke to Cassie Mercer about what she uncovered during her research.

What prompted you to write the book?
It’s a rather convoluted story. Writing a book was always on my bucket list. As an advertising copywriter all my life, most of what I had created was ephemeral in the extreme, and I saw having my name in the National Library of Australia catalogue as my form of immortality.

My first book was a memoir called Me and My Big Mouth: Living through Australia’s food revolution. I made it a food memoir as a way of giving my fairly typical middle-class Australian experience more general appeal, especially to baby boomers like myself. As publishers didn’t seem interested I self-published and sold the print books myself or through the printers. It’s also on Amazon as an eBook and every now and then I get an extremely small payment from them.

To get to the point – I had to do a lot of research for that book and decided to use many of the facts and stories I’d discovered in a website, Australian Food Timeline. This then became a hobby (obsession) and expanded to cover, not just my lifetime but Australian food back to colonial times and before.

Then several people suggested that it would make an interesting book in itself. I was introduced to NewSouth by Jacqui Newling from Sydney Living Museums; she had discovered my website and purchased my first book. I wrote to NewSouth with a proposal and it all went from there.

I’m more of a writer than a historian, but I do enjoy the research part of the process and am constantly updating the website, which has much more material than the book itself.

What about food for an Aussie summer?
I’m not a great fan of salad, so I probably prefer winter food when we make a lot of hearty stews and soups.

But the stand-out summer food for me is raspberries – by themselves, preferably with thick cream or mascarpone and maybe with a dash of vino cotto to bring out their sweetness. Or perhaps made into summer pudding with other mixed berries set into a white bread coating.

What’s the most surprising thing you discovered during your research?
There were a lot of surprises. For example, the first commercially available olive oil in Australia was actually produced in a gaol.

Another surprise was that Henry Leggo, founder of Leggo’s, was Cornish not Italian. So the company that’s now synonymous with Italian food in Australia started out not being Italian at all.

I was also shocked to find out about dugong paté being made by Brainard Skinnner in Queensland in the 1870s. He did a nice line in turtle soup and it surprised me to discover that protection for both those species didn’t happen until the late 1960s – 1968 for turtles and 1969 for dugongs.

Your book is unique – this is the first book to approach Australian food history as a timeline. What were your top resources for researching the book?

A Timeline of Australian Food: From Mutton to MasterChef (NewSouth Books, $34.99) is available now.