On Cook’s first voyage across the Pacific, Tupaia became an invaluable ‘supernumerary’ aboard the Endeavour, helping to reach far-flung islands, and communicating with other Polynesian cultures. Tupaia also drew a map for which he is long remembered.

A view in the island of Ulietea [Raiatea] with a double canoe and a boathouse, 1773. Pl. no. 3, v. 2 of: Account of the voyages undertaken by the order of His present Majesty for making discoveries in the southern hemisphere / John Hawkesworth. Engraving after drawings by Sydney Parkinson.

Born on the island of Raiatea, over 200 kms west of Tahiti, Tupaia was renowned for his ritual and navigational knowledge, and became an important mediator on the Endeavour voyage.

Tupaia’s original map of the South Pacific is lost but a copy of it survives in the papers of Joseph Banks, bearing the notation “Drawn by Lieut. James Cook 1769.”

Cook’s copy of Tupaia’s map viewable at the British Library:

In Cook’s drawing, pairs of tiny pricked holes mark each island, used to help him transpose their exact positions from the original. Later, the naturalist on Cook’s second voyage, Johann Forster produced a version of the map, further changing Tupaia’s original concept. 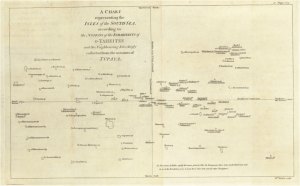 Map in ‘Observations made during a voyage round the world, on physical geography, natural history, and ethic philosophy…’ / by John Reinold Forster.
Image downloadable at the NLA: https://nla.gov.au/nla.obj-765334015/view?partId=nla.obj-765656145

After the ship left Tahiti Tupaia’s status as a geographer grew in Cook’s eyes, and Cook left Tupaia navigating for a month, perhaps to test the concept of how a joint project of a South Pacific map could be achieved.

Yet in the end Cook resumed control and the map remained a curiosity to him. Today, like Cook, many of us still view the Pacific as a mostly empty place, with vast distances between small island groups. Tupaia was less interested to represent the empty space, preferring to stress the relationships, with islands radiating out from different centres. For Cook it was about carefully positioning each island geospatially.

Debate continues today among those who try to understand Tupaia’s map, or the surviving versions. Tupaia showed islands as far-flung as Tonga in the west and the Marquesas in the east. Whatever its purpose, the map demonstrated a significant investment of time and effort on the part of Tupaia, Cook, Banks and others.

Ultimately, Tupaia’s map shows how difficult it is to depict two different systems of thinking in one medium. Pacific wayfinding systems tend to anchor travellers in an environment of islands that move toward the traveller rather than the other way round. Cook, in his own words, believed Tupaia was drawing a map. In re-creating the chart, Cook (and Forster), unable to abandon his interpretation of physical nature, added cardinal points to Tupaia’s map. But both could look at the map and see their own system represented.

Johann Reinhold Forster further “corrected” the position of the archipelagos known to him, marking the Meridian 150 degrees west of Greenwich. In doing so, he significantly altered the map, extending islands along the east-west axis. Forster marks the beginning of a long tradition of European scientists who have tried to interpret Tupaia’s map.

Learn more about Tupaia’s map of the South Pacific at the National Library of Australia, Cook and the Pacific exhibition on until 10 February.