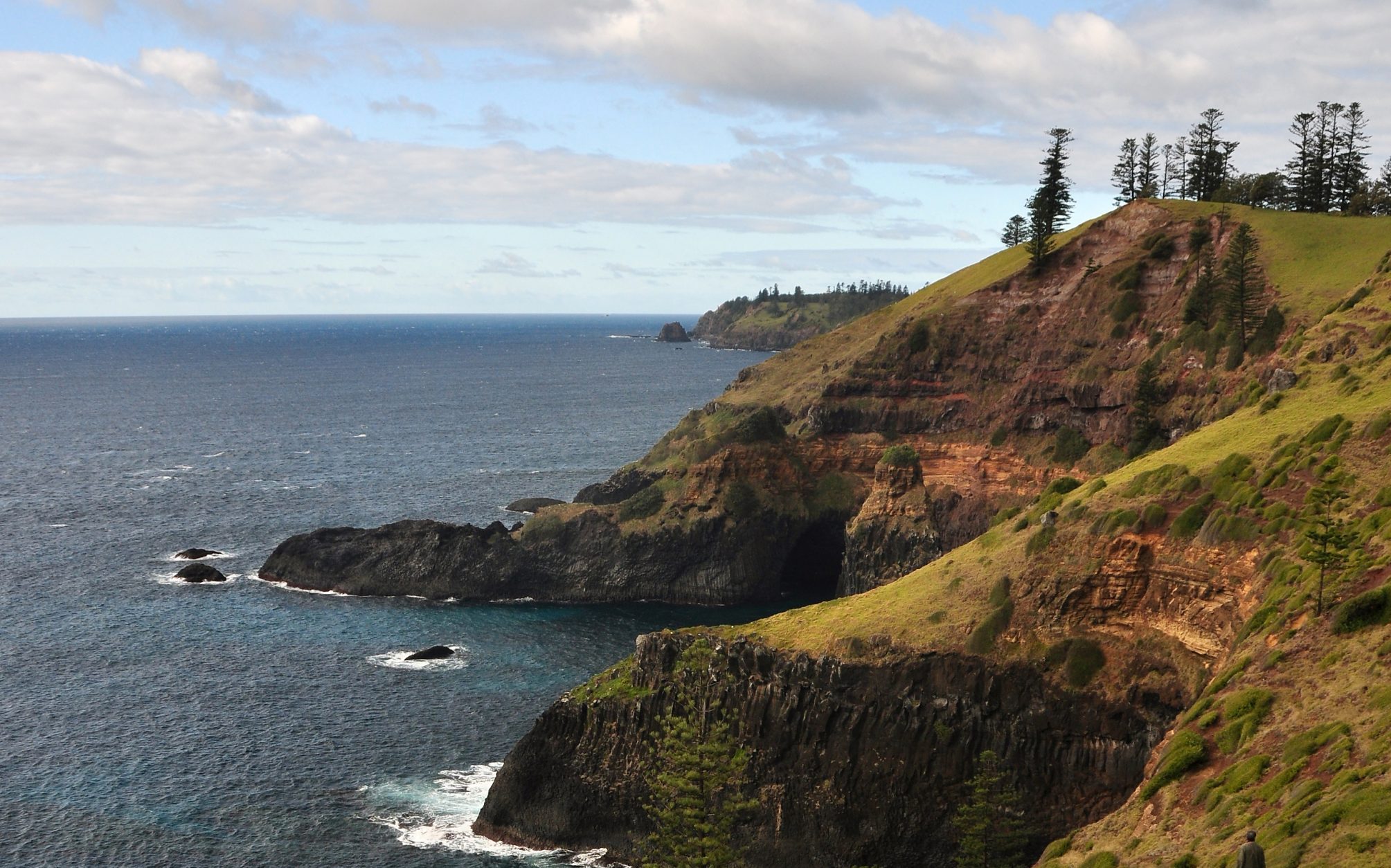 Norfolk is a history-lover’s heaven. Traces takes a look back on Consulting Editor Eden Cox’s journey to Norfolk Island.

As we boarded the Air New Zealand flight to Norfolk Island on a Friday morning, my partner and I chatted about Marcus Clarke’s fictional convict classic, For the Term of His Natural Life. In it, Clarke describes Norfolk Island as a ‘dreadful place… set apart for all that is hideous and vile in our common nature… it realises to my mind the popular notion of Hell’.

Disembarking at Norfolk Island’s tiny airport, we discovered the island was nothing like the one encountered by Clarke – Norfolk Island is wild and remote, with a mild climate, a startlingly turquoise ocean, red-rock cliffs and impossibly huge pine trees, and green landscapes to rival the Irish countryside. Yet, against this idyllic backdrop, a dark and fascinating chapter of history played out. We were ready to dive in!

The story of Norfolk Island

As we drove, I tried to recall everything I knew about Norfolk Island’s history, and our guide, Tania, filled in the gaps. In a nutshell, the story goes like this: Norfolk Island was formed by large volcanoes that erupted three million years ago. For centuries, it was thickly forested, and became a stopping point for the seafaring Polynesians travelling between New Caledonia and New Zealand. They planted flax, bamboo and bananas (which still grow in abundance, are very tasty, and are offered free at many shops and cafes!).

When Captain Cook spotted the island in 1774, he intended to make use of it as a source of masts and sails for the British navy. So, Captain Arthur Phillip, commander of the First Fleet, sent 22 convict men and women, plus Lieutenant Philip Gidley King, to establish a settlement on Norfolk Island for timber production and flax harvesting. Both ventures failed, but the settlement persevered until 1814, when inhabitants were finally moved off the island.

It lay unoccupied until 1825, when the worst convicts from every jail in New South Wales and Van Diemen’s Land arrived to suffer in what was to become the most feared penal settlement in the colony. They worked in chains, rebuilding the infrastructure and constructing the magnificent Georgian buildings that still remain today. For 30 years, such brutal and inhumane punishments were inflicted on the convicts that the order was eventually issued to abandon the island once more.

Meanwhile, mutineers from the HMS Bounty – the group had successfully escaped capture and established a home on Pitcairn Island, more than 6000 kilometres east – were looking for a new home, having outgrown their tiny island. Queen Victoria granted them Norfolk Island in 1856. Some families were appalled by the ‘ugly’ stone buildings – the first they had ever seen – and returned home to Pitcairn, but most remained, farming and whaling for a living.

The Pitcairners had their own systems of governance and even a unique language – Norf’k, which is still spoken among most of the Norfolk Island residents today and is even taught in the school. We made a mental note to one day return on 8 June, ‘Anniversary Bounty Day’, when residents don costumes and celebrate the anniversary of the Pitcairners’ arrival.

Read more about Norfolk Island’s past and present in edition 5 of Traces.