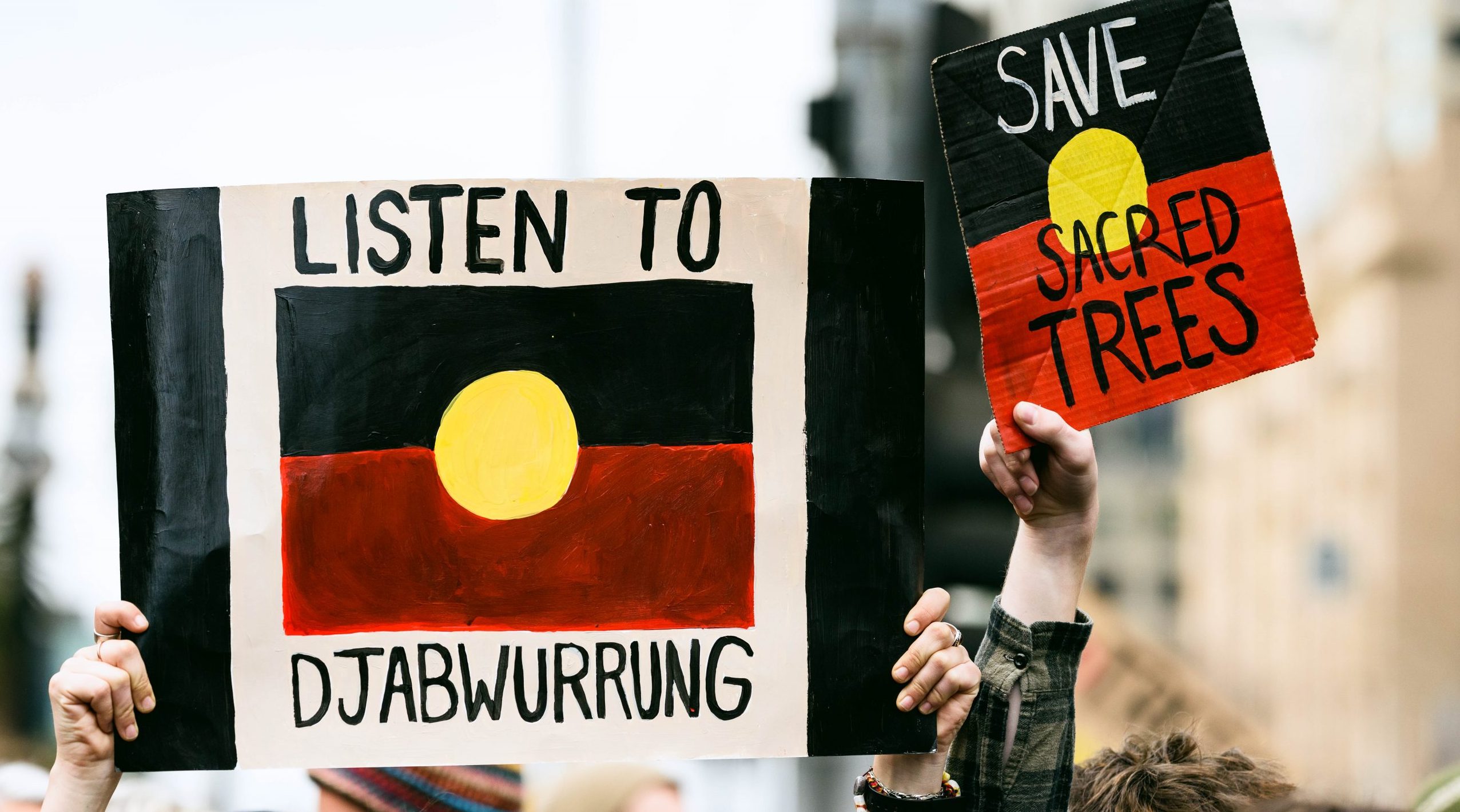 On 26 October 2020, a sacred directions tree and place of worship for the Djab Wurrung people in western Victoria, was destroyed to make way for highway expansion.

The tree stood just outside of Ararat, on a 12-kilometre stretch of land through which the Victorian Government is diverting the Western Highway – despite ongoing preservation campaigns over two years.

The area is sacred to the Djab Wurrung nation, forming part of the song lines (places visited by their ancestors where kinship is most powerful), and is home to birthing trees, including one thought to be more than 800 years old that has seen 50 generations of Djab Wurrung born inside a hollow in its trunk. A 350-year-old directions tree (Eucalyptus melliodora, commonly known as a yellow box or yellow ironbark), which has been shaped over centuries to resemble the form of a woman, is also found here.

It was once common for each Djab Wurrung child to have their own tree, which the community would plant shortly after they were born, mixing the child’s placenta with the seed. The tree that grew from the seed would become the child’s own directions tree, where they could always come to seek spiritual guidance. The practice is still carried out by some Djab Wurrung women.

Some Djab Wurrung people believe that ancient trees on this land act as guardians, carrying their DNA and ancestral bloodlines, highlighting that the significance of Country is more than the ground underfoot or a location on a map.

Archaeological work in 2018 found a round scar on the bark of the tree, indicating cultural practices, and it is also believed that the unique twisting shapes of the branches was created through human intervention over many years.

Despite these findings, however, the registered Indigenous group for the area, Eastern Maar Aboriginal Corporation, found no cultural heritage significance at the site, allowing its removal to go ahead. Many Djab Wurrung, however, have said that Eastern Maar does not speak for the entire community.

‘Our food, spirit, identity and culture. Our lands have a spiritual value and not an economic one. If the land is destroyed, so is our dreaming. Our dreaming is our story; it is what connects us to the beginning of time, back to our spirit ancestors – our creators’.

The DWHPE website notes that VicRoads plans to create a four-lane highway through the sacred area would mean the destruction of 3000 more trees, including many sacred ones and their significant surroundings.

Meanwhile, more than 400 academics from around the country, including lawyers, historians and scientists, have signed a letter condemning the tree’s destruction. The letter also demands protection for the remaining trees on the site.

While the fate of the remaining sacred trees on site remains uncertain, calls for a review of heritage laws are growing, with the federal government itself acknowledging the need for an overhaul.