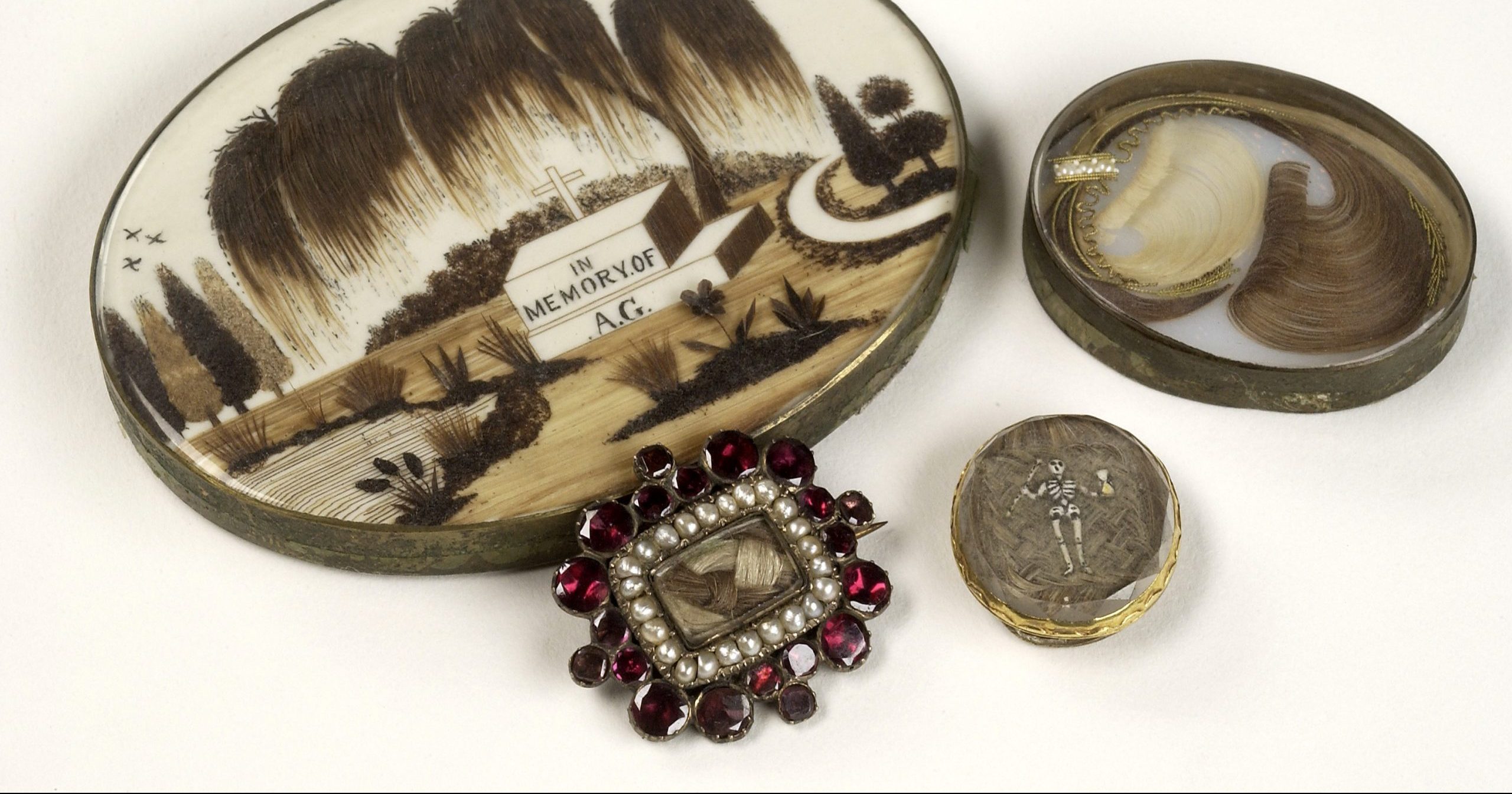 The tradition of wearing mourning jewellery to remember a loved one dates at least as far back as the 1600s. Here, we look at the basics of this fascinating custom and its symbolism, and how to identify Victorian mourning pieces.

Mourning jewellery is most often associated with the Victorian period, popularised by Queen Victoria’s very public mourning after the death of Prince Albert in 1861.

For the next 40 years, until her own death, Queen Victoria wore nothing but black, and commissioned special jewellery pieces to commemorate Albert, as well as other beloved family members who had died, such as her mother and daughter, Alice. Many of these pieces were made from black stones like jet and onyx, and some incorporated a lock of hair or a photograph of the deceased, which were all design elements that became popular among the masses, though many opted for cheaper black materials like black glass (‘French jet’), enamel or vulcanite.

Mourning pieces weren’t necessarily all black, though, with surviving examples commonly incorporating agate, pearl, garnet, human hair, ivory and gold, making for some truly striking and beautiful items. Pearls were often incorporated into the jewels made to remember children as they symbolised tears, while white enamel was used to remember children and unmarried women.

Mourning jewellery pieces that have been passed down through families and survive to this day commonly feature an inscription, the initials of the loved one, a knot motif (often woven from hair), a small portrait photo or painting, or a silhouette of the deceased. Mourning jewellery can come in many different designs, but are most commonly brooches, rings, lockets and sometimes hair or tie pins. They will often feature strong symbolism such as crucifixes, flowers (especially the forget-me-not and the turquoise colour associated with this flower), angels, clouds, mourners sobbing at tombs, urns and weeping willows.

Perhaps the most characteristic of Victorian mourning jewellery is the use of human hair, often woven into intricate patterns or even to depict miniature scenes. It was also commonly braided into the chains that held watches or pendants. Victorians believed that human hair contained the essence of a person, and therefore had a sacred quality. It symbolised the deceased loved one’s essence, as well as immortality, since the hair survived long after the person is gone.

Interestingly, it was not only the hair of the loved one that was incorporated into memorial jewellery. At once stage during the Victorian era, England was importing 50 tons of human hair every year for the mourning jewellery industry, to supplement the strands provided by grieving family members.

The materials and symbols used in mourning jewellery make them fairly easy to identify, with potential confusion only coming from ‘sentimental’ jewellery, which sometimes contained a lock of hair belonging to a spouse who was not deceased. (Queen Victoria carried a lock of Albert’s hair at all times after their engagement.) Sentimental jewellery is fascinating in its own right, however, particularly acrostic rings, which spelled out meaningful words like ‘dearest’ using precious gems set in the right order (for example: diamond, emerald, amethyst, ruby, emerald, sapphire and topaz).

Less common are jewellery pieces made from milk teeth (or baby teeth) collected by loving parents after they had fallen out. This type of jewellery is often known as ‘mothers’ jewels’, and probably trickled down to the masses yet again from Queen Victoria, who had a gold and enamel thistle brooch that was set with her daughter’s first milk tooth. Examples circulating the auction houses recently have included milk teeth set into rings and brooches, usually with gold, diamonds or precious gems.