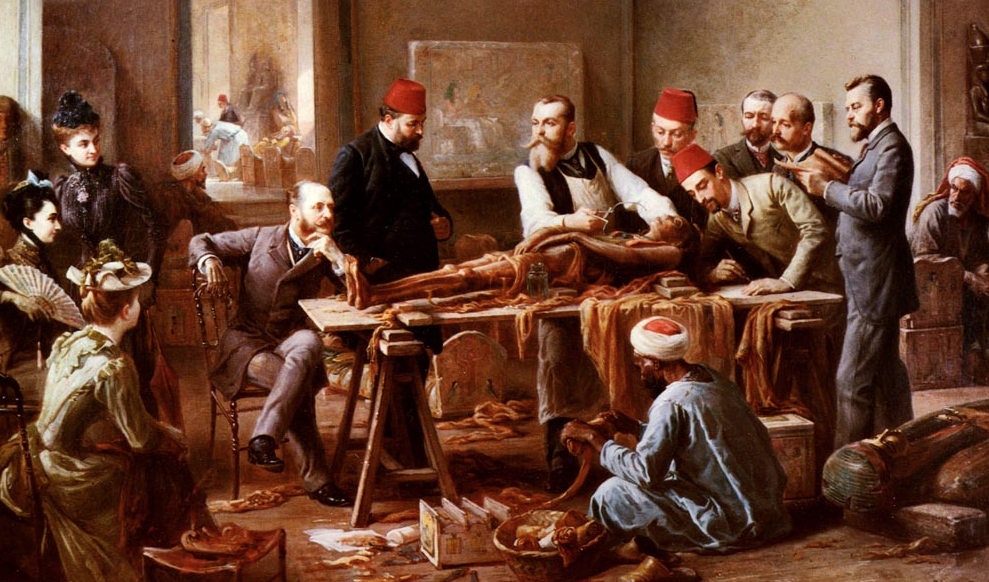 In the Victorian-era, England was swept with a new craze for ancient antiquities ­– in particular, those originating from Egypt. The fascination has become known as ‘Egyptomania’, and it reveals the culture of curiosity, discovery and exploration that exemplifies the Victorian era.

Egypt had entered international news in 1822, when the Rosetta Stone was translated, but it was the British military’s occupation of Egypt in 1882, during the Anglo-Egyptian War, that sparked a tourism trend around the world. A souvenir industry popped up to address the demand for photographs and other trinkets. Ancient mummies were, of course, at the heart of much of the appeal and ‘exoticism’ of Egypt among Westerners, so much so that those in the Egyptian tourist industry transported mummies from around the country to the ruins most visited by Western tourists.

Grave robbers aimed to capitalise on this interest, and many mummies were sold by unscrupulous dealers to tourists, to be used in ‘mummy unwrapping’ parties.

The cost of purchasing an ancient mummy from Egypt was negligible for those who had the means to travel overseas. Wealthy Englishmen would return from Egypt with ancient mummified remains and host exclusive ‘unwrapping’ parties at their homes. Surgeon Thomas Pettigrew, who had also written History of Egyptian Mummies in 1834, is well known to have made a lot of money through ticketed unwrapping parties. The event would involve a lecture on Egyptian history and religion before Pettigrew would gradually remove the mummy’s case and wrappings, and any artefacts found within, which were passed around the group for inspection.

So well-respected was Pettigrew for his work with mummies that the Duke of Hamilton commissioned him to mummify his own body after death. Pettigrew did so, and the Duke was interred in a sarcophagus that formerly held the body of an ancient Egyptian princess.

The craze did not last long, however, as interest in preserving heritage grew, and as superstition about mummy curses spread. The discovery of Tutankhamen’s tomb in 1922, however, went on to reignite Egyptomania around the world.